Photo: wikipedia.org The General Staff confirmed for the first time that the Ukrainian Armed Forces entered Kupyansk-Uzlovaya – – It was through the railway station of this village that the Russian invaders transferred their military equipment to the front. The general staff of the Ukrainian armed forces confirmed for the first time the release of […]

Photo: kremlin-ru Peskov also said they would not announce the mobilization – – Earlier, the media reported that Russian authorities are discussing the possibility of introducing martial law in the country. “No decision has yet been made to introduce martial law in any region,” he said. Peskov also added that so far there are no […]

In the Russian Federation, the head of the draft commission was shot in the military registration and enlistment office – media

Gaidai announced the “bavovna” mass in the Luhansk region

Photo: Sergey Gaidai / Facebook Explosion of a warehouse of Russian attackers in Alchevsk – – The explosions broke out in Alchevsk and in the Svatovsky district, and in Shchastya they set fire to a “polling station”. In the Luhansk region, a mass “bavovna” during a pseudo-referendum, held by Russian aggressors. Speaking of which informed […]

Photo: General Staff of the Armed Forces of Ukraine / Facebook Russian tanks often “lose their minds” in Ukraine – – The Russian occupiers suffered the largest daily casualties in the Donetsk and Kramatorsk area. On the last day, the Ukrainian army eliminated at least 400 Russian invaders. The losses of the aggressor country Russia […] 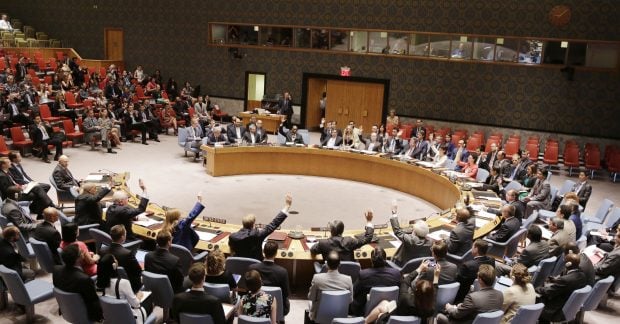 The Ukrainian Foreign Ministry notes that the Russian Federation should be held accountable for attempting to change Ukraine’s internationally recognized borders. Ukraine calls urgent meeting of the UN Security Council / photo: un.org The Ukrainian Foreign Ministry says Ukraine is convening an urgent Security Council meeting United Nations. This was announced by the spokesman of […]

Photo: mid.ru The Russian nuclear doctrine will extend to “new” territories – Lavrov – – The Minister of Foreign Affairs of the Russian Federation once again threatened to use nuclear weapons, answering a question about the fake “referendums” in Ukraine. Russian Foreign Minister Sergey Lavrov said that all Russian laws and doctrines, including nuclear power, […]

Iran has declared neutrality in the war

Photo: IRNA The spokesman for the Iranian Foreign Ministry Nasser Kanani – – The Iranian foreign ministry said the country maintains neutrality in the conflict between Ukraine and Russia. Iran regrets the deterioration of relations with Ukraine due to reports of Iranian drone deliveries to Russia. This was stated by the spokesman of the Foreign […]

Photo: ua.news Russian military uses chemical weapons in Ukraine – – The invaders used the K-51 chloropicrin grenade. There are no losses or critical states. On September 23, the military of the Russian Federation threw containers with a poisonous substance at the combat positions of the Ukrainian armed forces. Speaking of which in shape Southern […]