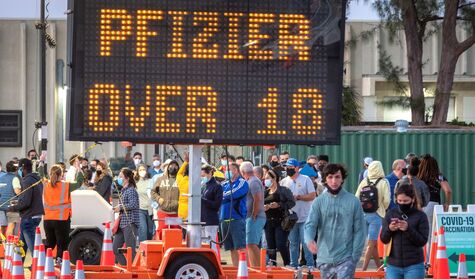 While Spain, like the rest of the EU countries, is experiencing a slow process of vaccination awaiting larger remittances in spring, other countries, such as United Kingdom, Israel O USA they are vaccinating at a good rate. The growing immunization of citizens is making the debate now be how to move from restrictions to a more flexible measure and whether this should be for everyone or only for those vaccinated. On the table, the cards or vaccination passports, such as the one that is studying implementing the EU in summer to reactivate tourism when the vast majority have had access to the vaccine.

In the United States, for the moment, it has been decided to make specific recommendations to the group of vaccinated, who already add up to more than 107 million people32.4% of the population, of which 62.4 million have already received the full guideline. The Centers for Disease Control and Prevention have established a series of guidelines for those vaccinated to regain some normalcy in their daily lives, with certain “advantages” over those who are not. This is what a vaccinated citizen in the United States can do today compared to one who is not:

Since the vaccine does not protect 100% from infection and therefore it is possible that a vaccinated person can spread the disease, the US CDC reminds that those vaccinated must maintain prevention measures such as a mask and social distance in meetings with people from various households different and in public places. The advice to avoid crowded and poorly ventilated places also remains valid for them and they emphasize that it is essential to exercise extreme caution in case of contact with people at risk. In case of traveling, it is still mandatory for them to carry a negative PCR and repeat the test three days after arrival.

The ‘Green Pass’ of Israel

Meanwhile, in Israel, the country with the most advanced vaccination in the world and where the effectiveness of vaccines began to be measured in the real world, more than half the population has already received both doses. The country undertook the vaccination process without the restrictions being relaxed. Only now are the measures beginning to become more flexible, something that those vaccinated especially are noticing. The country has chosen to implement a document, the Green Pass, which grants privileges to those who have received the two doses or have immunity for having passed the disease. Those who have this document, which can be obtained a week after the second dose, that is, at the moment in which it is considered that full immunity has been acquired, can access public swimming pools, gyms, restaurants and cafes, hotels, stadiums, theaters, cinemas and exhibitions, among others.

Read Also:  Italy is in crisis mode because of corona virus - Nau.ch

The chronicles from Israel already speak of images of relative normality that are reminiscent of the life before the pandemic: full terraces with hardly any masks and concerts, even if the capacity is still very restricted. Meanwhile, families were able to meet for Easter without restrictions.

It should be noted that the Israeli Ministry of Health grants the Green Pass valid for six months from the second dose: the reason, which is still uncertain how long the immunity created by the vaccines will last.

The other side of the coin is lived in other countries, such as Chile, with a high rate of vaccination but at the same time experiencing a new wave of the virus. The country is the third most vaccinated in the world after Israel and the United Arab Emirates, with 6.5 million people, 40%, vaccinated with at least one dose. However, it has been forced to enact new restrictions due to the increase in cases and the occupation of ICUs, which is attributed to a relaxation of the measures for vaccines and which is expected to be reversed as the process progresses.

The case of Gibraltar

Relative normality for all will not come until group immunity is achieved, which experts place between 70% and 80%. Gibraltar, with United Kingdom become one of the countries with the most advanced vaccinationI would have practically achieved it by now. After vaccinating 80% of the population, from this Sunday it is allowed to walk without a mask in the busiest streets, the only ones where until now it was mandatory, reports Efe. It is still mandatory in closed public spaces, shops and public transport. The curfew has also been removed.