The Olympic form of freestyle BMX, this street kid 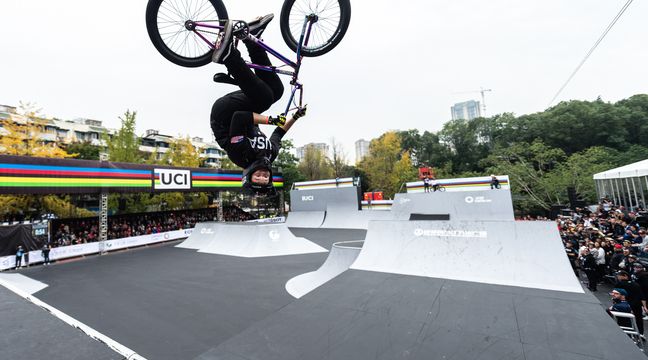 “In my garden, I created my own skate park. It was my only way of trying to compete with other nations. But hey… it was complicated. So there we finally have a great tool to progress and compete ”. In this month of January 2020, Alex Monfort has shining eyes as he tests the BMX freestyle park in Montpellier for the first time. A structure created for high level freestyle BMX. To give France the same chances as its global competitors.

The history of Béarnais is a bit like that of BMX Freestyle in France. A reigning discipline in the land of riders, where everyone challenged gravity in their corner, in their garage or in the neighborhood skate park. Until the IOC, well aware of the need to renew itself to attract a new audience, decided to make it one of its new Olympic disciplines in Tokyo. “If we go back three or four years, there was no follow-up. And suddenly, everything was packed, everything was structured, continues Alex Monfort. Everything is going at breakneck speed. We are finally recognized, helped, we can benefit from the status of high level athlete. It’s the end of the galley ”.

“Our sports had completely anti-federated codes”

A hassle that is also an integral part of this sport born in the street. And which, for some of its practitioners who are resistant to the idea of ​​joining the federal fold, should not have left it. Those who feel that they are losing their soul by joining the Olympic family. “BMX Freestyle did not wait for the federation to exist”, recognizes Serge Froissard, manager of the France team and responsible for the urban cycling sector at the French federation. “In France, the discipline is linked to urban cultures. She struggled to institutionalize for reasons that I do not pass judgment on. “

“Our sports had completely anti-Federated codes, because the people at the head of the Federations had not been able to adapt. They were headed by people whose age did not encourage them to take an interest in urban cultures ”, specifies Hervé-André Benoît, the creator of the sheets (the Montpellier International Sports Festival). “Hurricane [la société qui gère le Fise] has done a lot to bring these two worlds together. We have taken the initiative to go to them. Things have changed enormously in the last few years ”. For Serge Froissard, this double culture has only advantages. “This aspect of the discipline poses all the less to me because it brings out creation and creativity. The federation has no will at all to control this discipline. We take care of the sports branch, the competition and the high level. And being on the Olympic program is a phenomenal accelerator ”.

The world championships in Montpellier

And the high level, from Friday to Tuesday, we are right in it. Montpelier hosts the BMX freestyle and flatland world championships at the Sud de France Arena. An edition without an audience due to health restrictions linked to the coronavirus epidemic. But decisive for the French teams, the gaze already turned towards the Olympics (for freestyle, flat is not Olympic). “We really started a long way off, without a structure to train. We were realistic about the fact that we would have little chance of going to the Games. But we pushed to be ready: we had to work for Tokyo, in order, at worst, to have the tool for Paris 2024 ”, continues Serge Froissard.

The men have already validated a ticket, thanks in particular to the performance of the Héraultais Anthony Jeanjean at the 2019 world championships. The women are fighting with China and Australia to win theirs. The identity of the French representative (s) will be revealed at the end of these world championships. That they are organized in the Hérault, is anything but a coincidence. “Montpellier is the world capital of sports actions”, for Hervé-André Benoît. And not just for its top-level BMX Park. Since 1997, Fise, the International Extreme Sports Festival, has attracted up to 500,000 spectators every year (2020 except…). “I am convinced that urban sports have the means to surpass other disciplines in terms of popularity. They are unknown, but when you see these athletes, they are the new gladiators of the 21st century. For their recognition, the Olympics are the most beautiful door. We can see the success of freestyle during the Winter Olympics. They had the biggest TV audiences ”.

The creator of Fise has worked a lot for the exhibition of urban sport. Hurricane is co-organizing the Freestyle BMX World Cup with the UCI (Union du Cyclisme International). And he is the service provider for delivering the BMX Park to the Olympic site. “My dream is for BMX to be followed by as many people as the 100 meters final of the Olympics”, he imagines himself out loud. Which would be a hell of a social climb for this street kid …