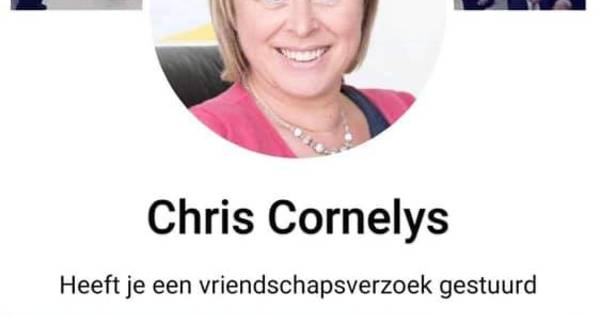 DeinzeThe face of Sabine Vermeulen from Deinze is sought after by scammers. For the sixth time she sees her profile photo appear on a fake Facebook profile. “This time my friends are getting requests from a certain Chris Cornelys. I’m tired of it and am going to report it to the police, ”says Sabine.

Everyone has received a friend request from a fake profile on Facebook. Scammers use existing photos to create a fake profile and then send friend requests and proposals of all kinds, usually with the intention of cheating people. The photos that are used can be from anyone, but the face of Sabine Vermeulen from Deinze is very popular with certain scammers. For the sixth time she saw a fake account appear with her photo.

“Three years ago, a friend contacted me to say he had received a friend request from a fake profile with my name,” says Sabine. “In the meantime I have already had the names Diana, Yolanda, Edgard Toni and Francisca Dovi and there is currently a profile circulating with the name Chris Cornelys. This is supposedly a representative of La Banque de France who lives in Paris and apparently offers loans to private individuals. When you go to that profile you will see that they are using a lot more pictures of me. There are also a lot of photos with other people, really bizarre. ”

“Does that bother me? Not at first, but now I’m tired of reporting this every time. I’ve had the profiles removed by Facebook every time, but one pops up every few months. The latter is very difficult to remove. I think I will go to the police this time because there are bad intentions behind it. The fact that this is still happening means that people will continue to accept such friend requests and respond to those proposals. Why do they want to do that with my photo? I don’t know, I might look reliable. ”

Naples, I work in the gym for Osimhen and Ospina

Najman responded to FAME MMA’s statement. “The suit will be filed”