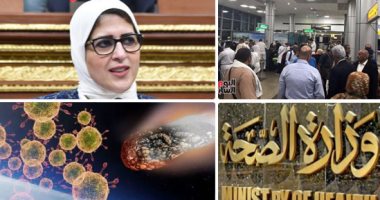 The Egyptian Ministry of Health and Population and the World Health Organization (WHO) announced today the discovery of the first positive case of a newborn Corona virus in the country for a “foreign” person.

Dr. Khaled Mujahid, Advisor to the Minister of Health and Population for Media Affairs and the official spokesperson of the ministry, said that the ministry succeeded in discovering the first case of a foreign person infected with “Corona” virus, thanks to the preventive precaution plan implemented by the ministry by activating the electronic program to record and follow-up of arrivals from countries that showed infections With the emerging coronavirus and through the preventive teams that follow them around the clock, indicating that laboratory tests were conducted for the suspected case, which resulted in a positive virus, but without any symptoms.

Mujahid added that the World Health Organization was immediately informed, and all preventive measures and measures of the case were taken in cooperation with the World Health Organization, where the case was transferred to a self-sterilized ambulance to the hospital for isolation, follow-up, and reassurance, explaining that the condition is HIV-positive and does not appear on it No symptoms, and his condition is completely stable.

He said that the Ministry has taken strict preventive measures against those in contact with the situation through conducting the necessary analyzes that were negative for the virus, and they were self-isolated in their places of residence as a precautionary measure for 14 days “incubation period of the disease”, pointing to their follow-up periodically every 8 hours and giving them health instructions to be followed And the building in which the case was used and those in contact with it were sterilized.

In this regard, Dr. John Gabor, the representative of the World Health Organization in Egypt, praised the speed and transparency of the Egyptian government in dealing with the situation, and its keenness to inform the organization of the case as soon as it is suspected, praising the preventive measures taken by the Ministry of Health and Population regarding the discovered case and those who are in contact with it.

John stressed that Egypt is one of the first countries to develop a good preventive plan to deal with the emerging corona virus and how to deal with infected cases once they are discovered, and that Egypt is also one of the first countries in the Eastern Mediterranean Region that the organization provided with accurate reagents to detect those infected with the new corona virus.

The Minister of Health and Population also held, today, Friday, an expanded meeting with the leadership of the Ministry to follow up the implementation of the Ministry’s plan to address and deal with the emerging corona virus, in the Ministry’s general office, stressing that all preventive measures are taken in the country’s ports.

The Minister of Health and Population follows the convening of the 24-hour Crisis Management Chamber, which includes representatives from all ministries and relevant authorities, at the Ministry’s general office, to follow up the situation of the Corona virus emerging inside the country and the Ministry’s preventive plan in the ports and ports and all health directorates in the Republic, stressing to raise the levels of readiness to the utmost In all ports and airports nationwide.

The number of Europeans with dementia is likely to increase less in the coming thirty years than was feared. This is stated in an...
Read more
Health & Fitness

A nurse, a customs officer and a teenager died at CHU Doctor Benzerdjeb of Oran following complications from the H1N1 flu, local sources reported...
Read more

Peter Schiff, the well-known enemy of Bitcoin, said in his last tweet that the price of Bitcoin can certainly rise, even if Bitcoin...
Read more

The farmers were taken off the motorway at Rolde. "The drivers of the tractors receive a ticket for driving on the motorway," the police...
Read more

"I don't trust, I say it clearly, I don't trust the Attorney General of the Republic," Quijano said. He says he wants to defend...
Read more

The number of Europeans with dementia is likely to increase less in the coming thirty years than was feared. This is stated in an...
Read more
Load more