Farewell to Welcome After being removed by the North Sumatran Police Chief, the former Percut Police Chief cries 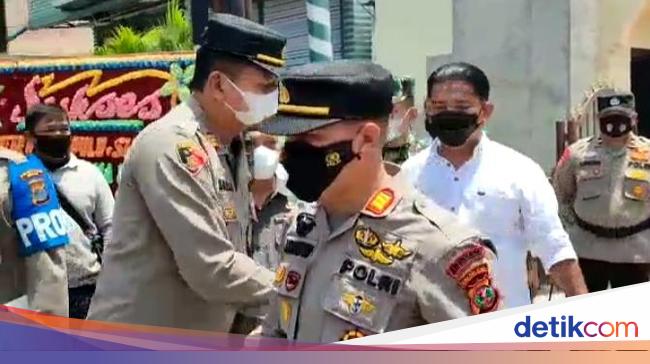 Janpiter said he was angry with his members several times. He said it was done for good.

Janpiter also requested that the relationship continue even though he is no longer on duty at the Percut Sei Tuan Police. He asked for prayers to be able to undergo an examination in the case he was facing.

“We ask for prayers from you all at this time we must be examined, hopefully we can resolve the issue so that we can be at peace with our families,” he said.

While delivering his speech, Janpiter was seen crying. He was seen several times wiping away his tears.

Janpiter was also seen crying when he came out of the Percut Sei Tuan Police Station building. He was seen crying while hugging several police personnel.

Previously, AKP Janpiter Napitupulu was removed from his position as Percut Sei Tuan Police Chief because of the case of a female trafficker who was allegedly beaten by thugs and became a suspect. This was done after the North Sumatra Police conducted an audit of the investigation.

He said Janpiter was removed as a form of firm action by the North Sumatra Police Chief. Hadi mentioned the position Police Chief Percut Sei Tuan will be filled by Commissioner Muhammad Agustiawan.

“Such steps taken by the Chief of Police,” he said.

In addition, the Head of Research and Development of the Percut Sei Tuan Police was also dismissed. The police stated that the investigation in this case was carried out unprofessionally.