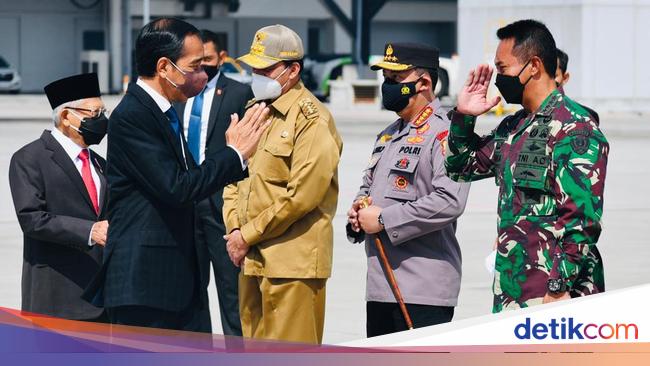 Jokowi flew to Europe for a series of high-level meetings. Jokowi will attend the G20 Summit in Rome, COP26 in Glasgow and then continue to fly to the United Arab Emirates (UAE).

There are interesting things behind Jokowi’s working visit abroad. From the group that took off Jokowi’s departure, the Army Chief of Staff General Andika Perkasa appeared.

Prior to that, Jokowi’s joke to General Andika also drew the spotlight. The moment that Jokowi joked at Iriana and Andika occurred after the TNI’s 76th Anniversary ceremony in the Merdeka Palace courtyard was over, Tuesday (5/10). At that time, Jokowi, together with Iriana and Vice President Ma’ruf Amin and Wury Estu Handayani, inspected the defense equipment in front of the Palace.

A number of other officials also accompanied, including Coordinating Minister for Political, Legal and Security Affairs Mahfud Md, Defense Minister Prabowo Subianto, and Mr Commander of the Armed Forces Marshal Hadi Tjahjanto. Jokowi seemed to have a dialogue with Hadi in front of a row of tactical vehicles on display.

After that, KSAD General Andika Perkasa also gave an explanation to Jokowi.

“This is something that stands out, this is the Army, we have 56 rantis,” said Andika.

The review of these tactical vehicles did not last long. Jokowi and his entourage immediately left the location. Before returning to the Palace, Jokowi had joked with his wife. Jokowi offered Iriana a ride in the TNI tactical vehicle and KSAD Andika, who was driving.

“How do you want to ride? Let Mr. Andika drive, ha-ha-ha …,” Jokowi joked to Iriana.

Jokowi, Ma’ruf Amin, Iriana Jokowi, and Wury Ma’ruf then headed for the golf car. Jokowi again drove the golf car, they then left the location of the defense equipment exhibition.