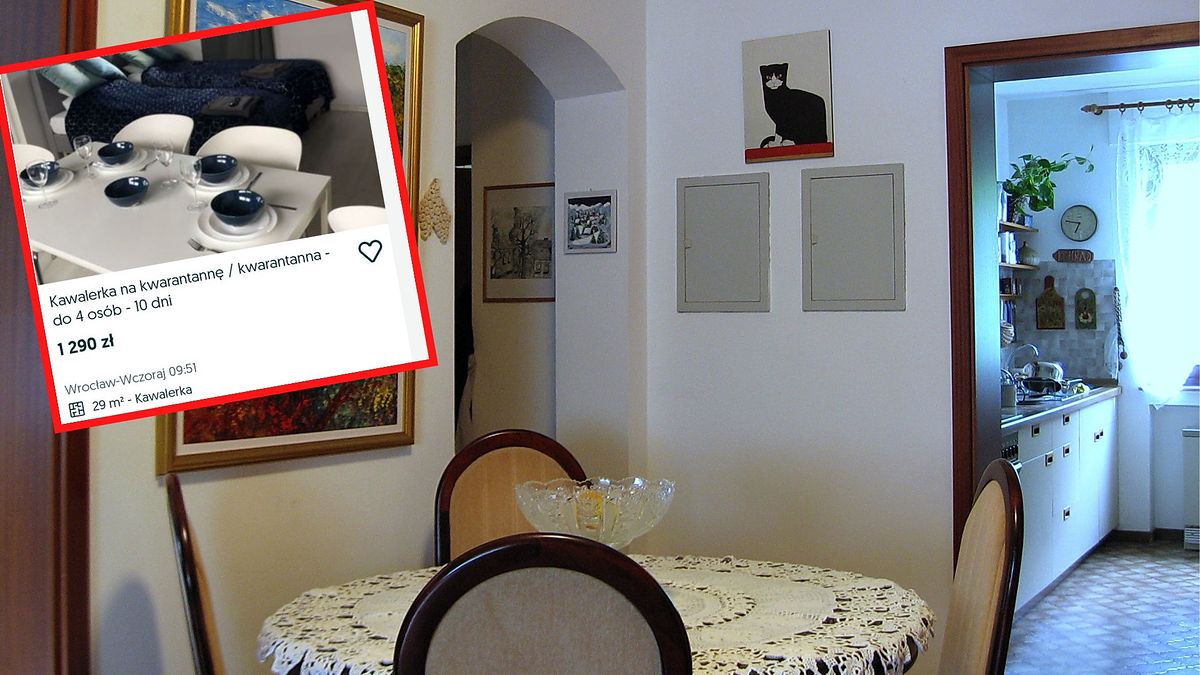 478,761 – this is the number of people currently in quarantine according to the Ministry of Health. The actual number, however, may be much larger, as many people isolate themselves without notifying the services.

In the spring, at the onset of the pandemic, special offers for people in isolation quickly appeared. At that time, however, official data mentioned tens of thousands of people in quarantine.

Now that the second wave of the epidemic is at its peak, popular websites are swarming with ads. Prices?

In Wrocław, a 30-meter studio apartment costs less than PLN 1,300. This is how much you have to pay in 10 days. In Gocław, Warsaw, you can rent rooms for quarantine for days – one costs 149 PLN.

There are also more expensive offers, for example in the capital city you can have an apartment with a panoramic view of Warsaw – 11 days, however, costs PLN 1700 there. In Warsaw’s Kabaty, you can spend a quarantine in a two-room apartment for PLN 1750.

Hotels and hostels also have offers. In the center of Łódź, a single person will pay 900 PLN for a stay in one of the hostels. However, when there are two people in the room, each for 10 rentals will pay 600.

– We even have 6-person premises. There is also a catering offer, and each meal costs PLN 15 – we hear at the facility.

The offers are therefore at least as many as during the first wave of the coronavirus. But how is the demand?

Read Also:  there is the extension for electric, hybrid and Euro 6 cars

– Definitely worse than in spring – tells us the owner of the premises in Warsaw. The one from which you can admire the Palace of Culture and other skyscrapers.

As he says, in spring a lot of people coming back from abroad and many foreigners came. – Now, however, there are a lot less calls, people probably spend quarantines at home – he adds.

Other property owners also admit: the interest is definitely lower than a few months ago. However, everyone sees slightly different reasons.

Two landlords we spoke to said that the most studios were during the government’s “Fly Home” program. Poles from all over the world then returned to the country, but everyone had to spend two weeks in isolation.

– Now there are no such returns. There is also no compulsory quarantine after returning to the country – says Mr. Marcin, who rents a studio apartment in the capital.

There are other reasons. – The epidemic has been with us for some time, some have already been isolated several times. If they would choose a studio apartment or a hotel each time, they would simply go bankrupt – another apartment owner tells us.

Mr. Marcin adds that currently the tests are much more accessible than in spring. Those who suspect infection prefer to spend a few hundred zlotys on the test, rather than condemning themselves to long isolation.

Or maybe it is about the prices of quarantine studios? They are tall and sometimes even shockingly tall. However, landlords reply that it is difficult to reduce the prices, because disinfection of the apartment costs a lot.

For some, renting a property for quarantine is the last resort, as for Ewa, whose story we have already described. Because the rental market has shrunk significantly, and the owners of houses or flats still have to pay monthly fees.

Quarantine facilities could be a good option for doctors or nurses who go into isolation to protect their families. In the spring, many medics had entire hotels or dormitories at their disposal. How is it now?

As we hear in the Supreme Medical Chamber, there is no such solution at the central level. Quarantine accommodation for a medic may be organized or paid for by local governments or hospital authorities.

But both now have to watch every zloty. And there are simply no funds for quarantine premises.

Potentially infectedThe shield does not cover? After all, human life is priceless, if thanks to this I do not infect even one person, it is probably worth financing, after all this … Read the whole thing

“The reason for your divorce is because you cheated.”[찐경규]

In the Irkutsk region 10 people were injured in a collision of two cars :: Society :: RBC

15-year-old who was missing for more than a month, safe and w …

The venues for CONMEBOL Libertadores are confirmed

What is the truth about the “scandalous image” of Bahraini artist Hanan Reda? – Toss News

After the increase in Corona injuries … an official with the “Health”: 3 cases of return of wages