Probably the lightest e-bike in the world comes from Stade 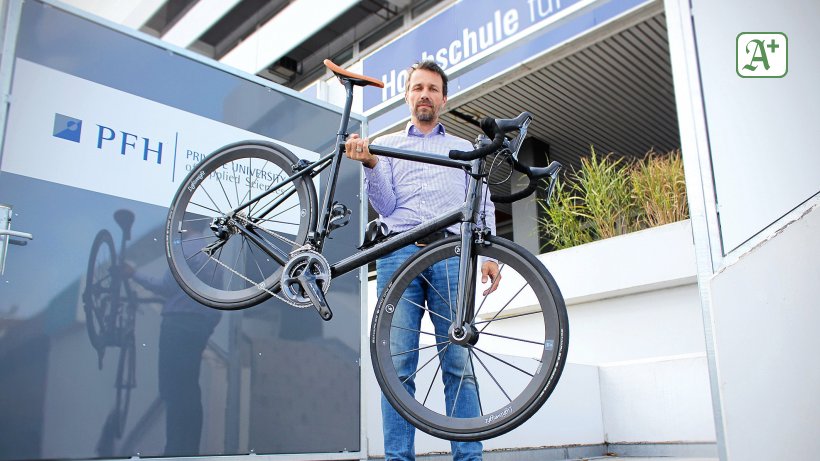 Stade. It is probably the lightest e-bike in the world: Marc Siebert, professor at Hanse Campus in Stade, has one Carbon bike with electric drive developed that weighs only eight kilograms. The auxiliary drive cannot be seen on the outside of the high-tech wheel. Because Drive technology and battery are integrated in the frame.

Siebert is teaching on Private University of Applied Sciences Göttingen (PFH) belonging Hanse Campus the technology of fiber composite materials. At the same time, Siebert builds customized bicycle frames with his company as an independent entrepreneur. “I developed the e-bike for a passionate cyclist,” says the professor. “He is an ambitious racing driver and only needs the support of the electric motor on the mountain. This can be switched on at the push of a button if necessary. Otherwise, the bike rides like a normal racing bike. “

This is how the concept differs from most E-Bikes, They have a wheel hub motor. These drives are always on duty, only the intensity of the support is variable. However, if the battery is empty, the motor makes it difficult to pedal. This is not the case with the Sieberts prototype. The engine only becomes active when the driver calls up his power at speeds below 25 kilometers per hour.

In the race for the lightest e-bike, the Stader vehicle is ahead. Relative feather weights that are commercially available weigh more than ten kilograms. One-offs are even lighter than Siebert’s prototype, but the motor and battery were subsequently attached to the outside of the frame of a conventional bicycle. The Stader bike has its motor in the seat tube and the battery in the down tube of the bicycle frame.

The battery lasts for 1.5 hours of support

Siebert emphasizes that the drive should not be hidden, “rather my customer wanted the look of a classic racing bike. He asked his training group if it was okay for them to ride this bike. ”For technical optimization, the retired sportsman has been on the e-bike for twelve months and documents his experiences. For example, it is curved through the Pyrenees. Uphill the battery provides up to 1.5 hours of extra push, enough energy for six-hour bike tours through the wild mountain landscape.

The essential components of the new racing bike are made of high-strength and very light material: frame, fork, seat post, saddle, handlebar, the two wheels and two cup holders are made of so-called carbon fiber reinforced composite material, in short CFK, colloquially carbon. The carbon fibers embedded in a plastic resin make the material very stiff and do not let it tire even under high loads.

Other parts, such as the gears and brakes, are made of aluminum. The motor power of 200 watts is in the lower range of e-bike motors, since additional start-up is only required in phases. Siebert: “On the mountain under full load, the driver is relieved by 50 percent.”

Siebert would like to see his e-bike on the market and presented his prototype at the leading international trade fair Eurobike in Friedrichshafen on Lake Constance in September. Several manufacturers have shown interest, he reports, with whom he has already spoken in detail. A special highlight is the battery integrated in the carbon frame with the charging socket at the end of the right handlebar – “my customer also thinks it’s great. The handlebar is easy to grip and becomes a socket when charging. “

The president of the PFH Göttingen Prof. Frank Albe is pleased about Siebert’s inventive and entrepreneurial spirit: “As an entrepreneurial college, we expressly welcome the innovative and application-oriented initiatives of our professors. Because the knowledge gained from this flows directly into their teaching at the PFH and makes our courses more attractive. ”

Next, Marc Siebert wants to develop an ultra-light electric handbike

The next research project is already in the starting blocks. Siebert wants to develop an ultralight handbike with an electric drive for people with disabilities. Siebert had submitted a corresponding research application from the PFH to the European Fund for Regional Development (ERDF). The early gift came shortly before Christmas: the donation notice for the “EMOB-REHA” project. The project has a total of around 300,000 euros available. The PFH raises 100,000 euros as own funds. Around 200,000 euros are added as ERDF and state funding.