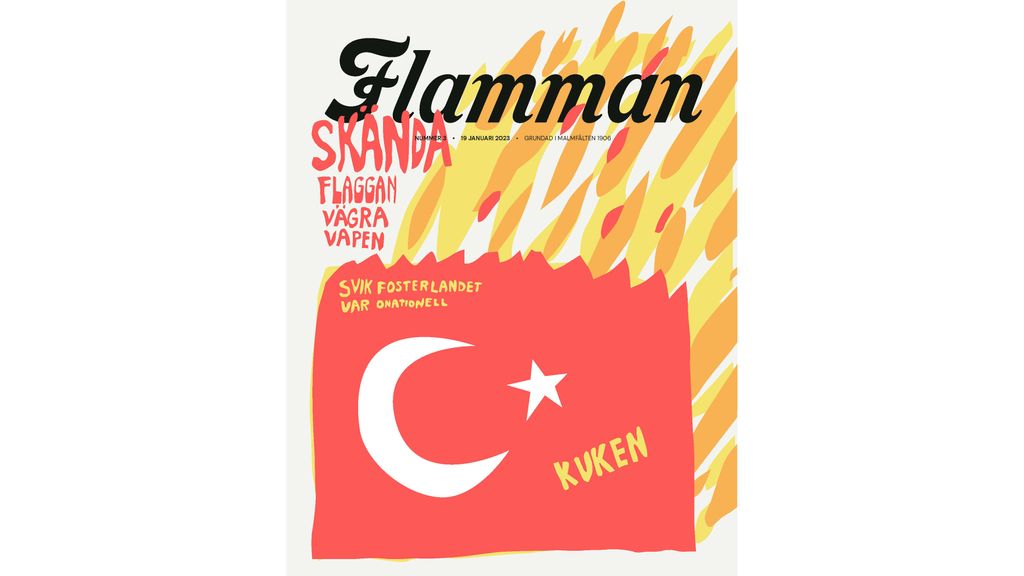 How long will Sweden continue to dance to the tune of Turkish President Erdogan? That is the message with which the Swedish magazine Flamman has announced a drawing competition. With a satirical drawing of the Turkish president, cartoonists can earn 10,000 Swedish kronor, about 900 euros.

“I just received my first dick pic. With Erdogan’s head as a jerk,” says Leonidas Aretakis with a laugh. Since Monday, the mailbox of his magazine Flamman has been filling up, he has lost count. Erdogan as an excited male genitals, but also more refined, like the head of the Turkish president as a fortress that the Swedish government walks into, ignorant of all the dangers that lurk there.

One casually penned down on a handkerchief in the pub, the other wouldn’t look out of place in a gallery. Suddenly Aretakis, editor-in-chief of Flamman for a year and a half, is a guest at every radio and television station.

The attention says a lot about the difficult relationship with Turkey. Since Sweden applied for NATO membership together with Finland, Ankara has been unsettled. Reparations such as lifting an arms embargo are insufficient. The extradition of people accused of terrorism by Ankara must be speeded up, something that the Swedish rule of law prevents.

The concessions are causing resentment in Sweden. After two hundred years of neutrality, the conservative government’s pragmatism towards Turkey is a thorn in the side of many. Aretakis: “Our foreign minister recently said that Turkey is a democratic country with which we share the same values… Shameful.”

An incident last weekend was the final straw for Flamman’s editors. When Kurdish demonstrators hung a doll resembling Erdogan upside down in front of Stockholm City Hall, a visit by the Swedish parliament speaker to Ankara was canceled.

The Swedish government condemned the pop action, calling it an attempt to ‘sabotage’ NATO accession. Aretakis cites evidence that the NATO issue affects Swedish Kurds’ freedom of demonstration and expression. He understands that the action could be perceived as tasteless, but denounces the lack of a critical attitude towards Erdogan. “He should not interfere in Swedish affairs, our government is being held hostage by an autocrat.”

And so Flamman opts for satire, a weapon that hits Erdogan. This became clear in 2016, when the German comedian Jan Böhmermann mocked the Turkish president and was sued. Four years later, a diplomatic row erupted when the French satirical magazine Charlie Hebdo published cartoons about Erdogan published.

Still, a pyrrhic victory is lurking. Earlier, Erdogan labeled satire about him as a form of Islamophobia. Isn’t Aretakis afraid that Erdogan will use the drawing competition to present himself as a martyr in front of his own audience? “We simply have to take that risk, you also see it with other autocrats: Putin speaks of Russophobia and Orbàn recently coined the term ‘Hungarophobia’.”

Possible consequences for Swedish NATO accession are of little concern to him. Because of his socialist signature, Flamman is against NATO membership on principle. “Apart from that: in Sweden you have the right to mock Erdogan. Should we stop critically approaching someone who violates human rights because we are in a NATO admission procedure?”

It’s not just Sweden that’s concerned. Finland is also struggling with how its neighbor compares to Turkey. Finnish politicians warn Ankara should not feel that the values ​​of the two northern countries are liquefying under pressure.

Swedish Prime Minister Kristersson also seems aware that the stretch is gone. At the beginning of this month he said that no more concessions will be made. Meanwhile, Erdogan is using everything to rebuke the aspiring members and to raise profile in his own country. This week, he upped the ante with a demand to extradite 130 “terrorists.” With Turkish elections on the horizon, a more flexible attitude seems a long way off.

While a Turkish decision has not yet been made, Aretakis has to take one on Monday when he announces the winning drawings. The idea that some belong in a gallery could well come true. Flamman is in talks with museums in Stockholm to display entries in a special exhibition.

Despite all the attention, the government has not yet responded to the drawing competition. “Maybe after all the fuss, they’ll finally realize that rushing to respond to criticism isn’t the best strategy.”