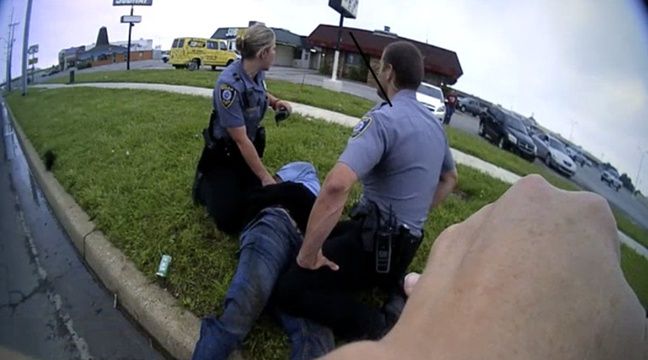 “I can’t breathe! In the United States, the last words (“I can’t breathe”) of George Floyd, but also ofEric Garner, became the rallying cry of the demonstrators who denounce the police violence and the numerous deaths by asphyxiation of African-Americans during their arrest. In a particularly tense climate, Oklahoma City police released a video of the arrest of Derrick Scott in May 2019, who died when he arrived at the hospital, on Wednesday. After the footage was released, the victim’s family called for an investigation, after police estimated last year that the officers were not at fault.

Police responded after a man “waving a gun” was reported in a parking lot. Arrested by the agents, Derrick Scott ran away. He is caught by a policeman who places him flat on the ground on his stomach. Two officers then attempt to subdue the suspect and find a pistol in his pants. They don’t use a choke grip but you can see a knee between his shoulders. According to the city police, this is a “standard” maneuver.

“I can’t breathe,” pleads Scott. “I don’t care,” said one of the police. “He pretends to be unconscious,” added his colleague. According to the sheriff, the police immediately called first aid and then placed the man in the survival position. He regains consciousness and then, while the paramedics try to get him on the stretcher, Scott tries to kick them. In the ambulance, he lost consciousness again. Rescuers try to revive him but he dies in the hospital.

On the autopsy report, the medical examiner lists “traumatic pneumothorax” as “probable cause”. Among the factors that may have played a role: immobilization, heart disease and recent consumption of methamphetamine.

The prosecutor’s office did not react on Thursday evening. In an interview with local KOCO 5, the mother of the victim, Vickey Scott, accused the police of treating her son “like an animal”. The civil rights association NAACP demanded “an end to the lethal police maneuvers”.