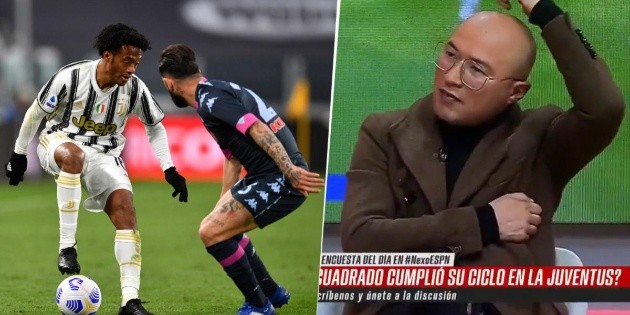 The first leg matches of the Champions League quarterfinals are over and the balance sheets of the performance of the teams and the great figures that remain in the maximum competition at club level in the world are beginning, as well as some of the clubs are outlined to advance to the semifinals of the tournament.

One of the great absentees in this event was Juventus, who with Cristiano Ronaldo was eliminated from the Champions League at the hands of Porto, in the round of 16, and is now suffering enough to win in Serie A in Italy, which already seems lost since it is 12 points behind the leader Inter Milan and after 9 consecutive years winning the title, it seems that the streak will end.

For none of them it is a secret that despite having cracks the size of CR7, Juventus has Juan Guillermo Cuadrado one of the best players of the season, competing at the highest level and always making it clear that he can perform any function on the right wing. . In fact, one of those who is saved in this campaign for the Italian media is the Colombian.

With this context, in the Nexo ESPN program, the debate was raised as to whether Cuadrado’s cycle in Juventus is already completed and should change of scene and the journalist Jorge Bermúdez threw an opinion, at least very controversial, ensuring that today the side has all to integrate the Real Madrid squad.

“Real Madrid would like Cuadrado. Lucas Vázquez is improvised, Carvajal is out there and this is one of the best right side markers or right flags in football in Europe. So I think that a team like Real Madrid could be perfectly set on It is a pity that Barca when Dani Alves left did not notice him, this was the replacement, “he said.

Read Also:  Without Ronaldo, Juventus defeat Lazio and remain in contact with both Milan teams