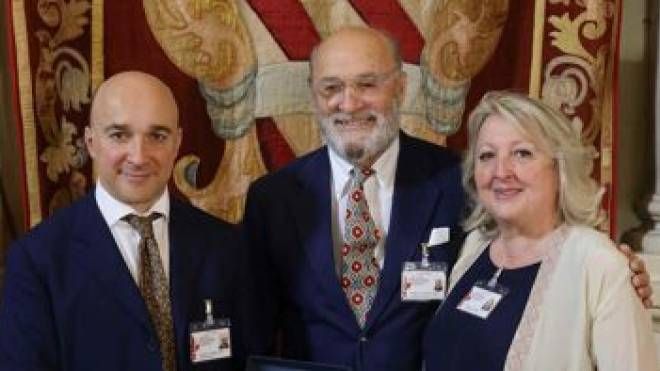 Pesaro, April 9, 2021 – “It would have been nice to take him to Pesaro, but unfortunately the Caravaggio we missed it, “he says Giancarlo Selci. Why the antiquarian Giancarlo Ciaroni together with his wife Anna Maria and their son Andrea they understood that they were facing the ‘blow’ of the century. “I had decided to put in sale my home in Milan – says Ciaroni -, but I wasn’t sure if the money would be enough, so I went to Giancarlo Selci. And he told me ‘if that’s not enough for you, I’ll take care of it’ “.

“I don’t understand anything about art and I only talk about the things I know – continues Selci – but I trusted him. Too bad, it would have been nice to have him here”. A movie story that of this painting by Caravaggio discovered by chance in Spain. Reporting to Ciaroni of a painting that is going to auction for 1500 euros a Madrid it comes from an Apulian merchant, Antonello Lo Pinto, “who among other things sends me the message in French and also adds that the painting was in Belgium”, says Giancarlo Ciaroni. At that point the antique dealer sends a thousand euros to get a photo of the painting.

“That photo – he says the Rimini scholar Massimo Pulini – Ciaroni sent it to me the same evening without any comment and without saying a word. I have been collaborating for years with the Altomani antiques house and I can say that we were in front of Caravaggio’s Ecce Homo painted for Prince Massimo in 1604 “. Pulini already collaborated with the Pesaro antique dealer in identifying the small painting by Barocci ‘ torn ‘from the altarpiece of the cathedral of Urbino. At 9:48 pm on the evening of March 24 Massimo Pulini, after having seen the photo of the painting, writes this little message, with tones of true amazement: “C … o! It’s Caravaggio and maybe it’s the real Caravaggio of the Genoese competition. But where did you find him?”

Read Also:  This is the new love of Celine Huijsmans | Entertainment

Ciaroni at that point he tries to close the deal, offering all the maximum guarantees and even a percentage to the Apulian trader, who however begins to suspect and smell the deal. “And call immediately Vittorio Sgarbi, quoting me. And the art critic calls to Puglia the next day to say that he had a wealthy industrialist willing to buy the painting “, says Ciaroni.

At that point, the rumors of the experts broke out about this work which was attributed to the circle of the painter Josè De Ribera: it went to auction at the price of 1,500 euros. “The painting it had to be beaten today – continues Ciaroni – but after all that happened it was withdrawn and most likely it will remain in Spain, perhaps we will see it again at the ‘Prado’ museum in Madrid. I stayed in Spain to review it before they put it in a crate. A courtesy that they wanted to do me because I was the first to recognize the hand of Caravaggio in that painting. Indeed, to tell the whole truth, the first to pronounce that name was my wife Anna Maria “.

In truth, just to remain in the city, the antiquarian had also turned to another well-known industrial Pesaro, lover of art, to seek possible financial coverage. Who in a small message replies to Giancarlo Ciaroni: “Calm down and fly low”. The day before yesterday Vittorio Sgarbi sent a couple of messages to Giancarlo Ciaroni to announce that he would mention him in some interviews, which Ciaroni then did not want. So we speak generically of an antiquarian.

For the record, the painting is owned by three Spanish brothers who found it at home and did not agree both on the price and on who should keep it. How much is a Caravaggio worth? “The estimate could fluctuate between 150 and 200 million. If brought to the United States it could even reach 400″, concludes Ciaroni. A story that started from Pesaro and vanished into thin air due to the fuss that arose. And as Giancarlo Selci says: “Too bad, it would have been nice to have a Caravaggio in town”.