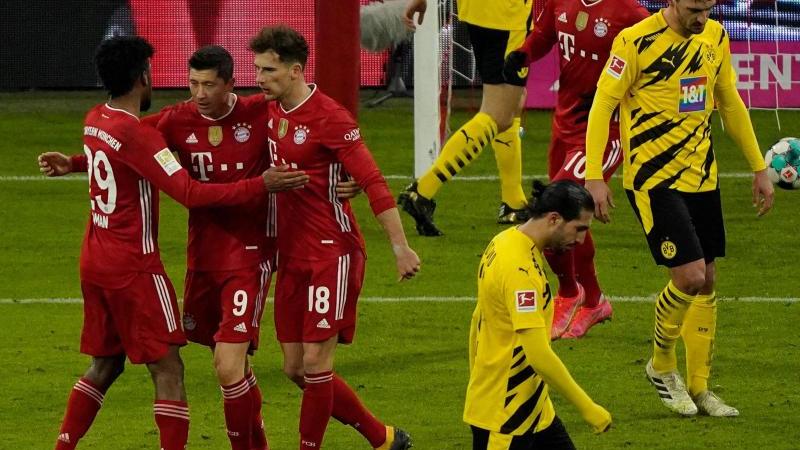 Berlin (dpa) – FC Bayern Munich has successfully defended the table lead in the Bundesliga with a show of strength. Thanks to late goals from Leon Goretzka and Robert Lewandowski, the defending champion won his home game against Borussia Dortmund 4-2 (2-2).

Due to the success, Bayern keep two points ahead of RB Leipzig with 55 points. The pursuer had previously won 3-0 (1-0) at SC Freiburg and thus presented in the title fight.

World footballer Robert Lewandowski saved the team of coach Hansi Flick with his goals number 29, 30 and 31 in the 26th minute, with a penalty in the 44th minute and in the 88th minute the victory. Goretzka scored the fourth goal (88th). Erling Haaland (2nd / 9th) had put Dortmund in the lead with a double, but had to leave the field injured in the 60th minute.

Hertha BSC shot their way out of the earnings crisis after an early 0: 1 deficit and beat FC Augsburg 2: 1 (0: 1). VfL Wolfsburg conceded their first defeat in the second half of the season with the 1: 2 (1: 2) at TSG 1899 Hoffenheim. In the duel between the recently severely troubled western clubs Borussia Mönchengladbach and Bayer Leverkusen, Gladbach coach Marco Rose had to accept another disappointment with the 0: 1 (0: 0) home defeat. Eintracht Frankfurt and VfB Stuttgart parted 1: 1 (0: 0).

In Breisgau, Christopher Nkunku used a serious mistake by the Freiburg defense to take the lead for RB (41st). Goalkeeper Florian Müller had opened the game flat through the middle, where Baptiste Santamaria was immediately disturbed by Leipzig’s Kevin Kampl after the risky pass. As a result, the ball jumped to Yussuf Poulsen, who only had to cross over to Nkunku, who shot into the empty goal.

Read Also:  Doctors told who it would affect

“Basically everyone knows that it feels good to be the leader of the table,” RB coach Julian Nagelsmann had answered a hypothetical question before the game at Sky. Alexander Sörloth (64th) and Emil Forsberg (79th) made sure of that with more goals. After Bayern’s draw, Leipzig slipped back to second place.

In Gladbach, Patrik Schick (77th) shot Leverkusen to victory after a long goalless game. While Bayer coach Peter Bosz can take a deep breath, the situation for Rose, who is moving to Dortmund at the end of the season, is not going to be any more pleasant.

The first goal of the afternoon came in the Berlin Olympic Stadium: Less than two minutes were played when the Augsburgers completed their first attack with a goal. Laszlo Benes took the lead after one minute and 50 seconds. The hosts came into the game better afterwards, but had a hard time for a long time. But Krzysztof Piatek (62nd) and Dodi Lukebakio (89th / penalty kick) turned the game around and led the Berliners to their first win since January 2nd.

For the third place in the table from Wolfsburg, more than one series ended. The best team to date in the second half of the season lost a game for the first time in the second half of the series and missed the fifth away win in a row. In addition, Koen Casteels had to accept a goal in the league for the first time after 673 minutes – against his ex-club, of all places, when Christoph Baumgartner gave him no chance with a volley shot from close range (8th). Wout Weghorst, who last missed a penalty at the cup in Leipzig, scored the equalizer with his 15th goal of the season (23rd), but Andrej Kramaric scored for Hoffenheim’s victory (41st).

Read Also:  20 minutes - "The divorce from Jen was the biggest mistake"

In Frankfurt things got turbulent late after a goalless first half. Sasa Kalajdzic gave VfB the lead (68th), but only one minute later Filip Kostic equalized (69th).