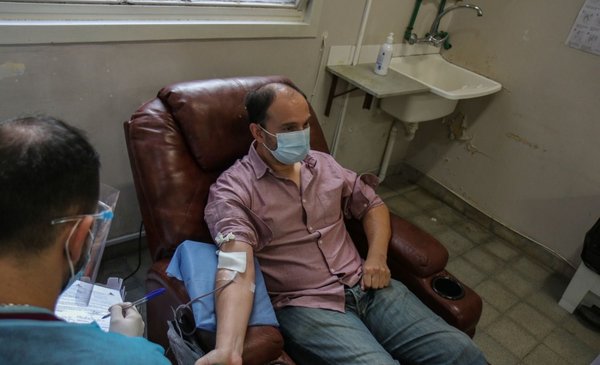 The Surgical Anesthetic Union of Uruguay (SAQ) warned this Friday about the need to increase daily blood donations in the country to avoid a greater shortage in the supply, which already suffered consequences during the last year.

Before the emergence of the coronavirus, between 35,000 and 40,000 Uruguayans required blood annually, says the SAQ, which now aspires to receive “immediate support“so that donations are close to the 450 daily and blood banks stop running into difficulties.

“Unfortunately, the situation that the country is going through due to the pandemic has determined a significant reduction in that number of donorsHowever, blood requirements continue to exist (polytraumatized patients, digestive hemorrhage, treatment of some cancers, etc.) generating extreme situations in some institutions in the country, “the union’s statement said.

And to explain this decline they find more than one reason: “Surely some are afraid to leave their homes or come to donate. Another cause of impact, without a doubt, is the absence of the surgical donor. Although it is not mandatory, all patients who are going to undergo surgery are required to bring between one and two blood donors before being admitted to the hospital. This data coincides with the reduction in scheduled surgeries that was announced by our union. “

According to the group of specialists, lhe donor reduction is already seen as a “dramatic situation” for medical professionals in daily practice, since they must intervene in patients without having available blood. To avoid this risk, the blood bank of the Hospital de Clínicas established a system of medical and student donors, but not all centers have this possibility.

The anesthetist Marcos Schioppi, who calls for an increase in the number of volunteers, insisted that donating blood is a “act of solidarity“, that carries “just 35 minutes“.” All Uruguayans can do it because it does not involve an expense; joining the campaign and donating is very important, “he said, while Dr. Ismael Rodríguez Grecco assured that all the necessary precautions are taken for the attending public.

Along the same lines, the specialist Ismael Rodríguez specified that at the Clinicas currently some 40 or 50 interventions are carried out daily, which helped to do not suspend any operation due to lack of blood.

The Surgical Anesthetist Union also insisted, through Rodríguez Grecco, that the plasma donation for coronavirus patients “can save lives”. “The plasma is intended for those older than 75 years or older than 65 years with comorbidities and must be supplied within 72 hours of starting symptoms,” he explained.

In addition, he announced that the Hospital de Clínicas is close to signing an agreement with ASSE to install a covid room, where between 15 and 20 patients will be treated daily for plasma transfusion.

How to donate blood

To donate blood it is important to make an appointment beforehand.

To donate at the Blood Bank of the Hospital de Clínicas, Uruguayans must contact 099170264.

For its part, from the Chair, the medical staff is invited to fill out the following form, which is of vital importance for the university center https://forms.gle/f3owbsWJUruG1ite6.

To donate blood to the ASSE National Blood Service:

In other parts of the country, they should go to the reference centers in their area, to find out about the conditions for donating blood. Uruguayans can also donate to their mutuals and health providers.