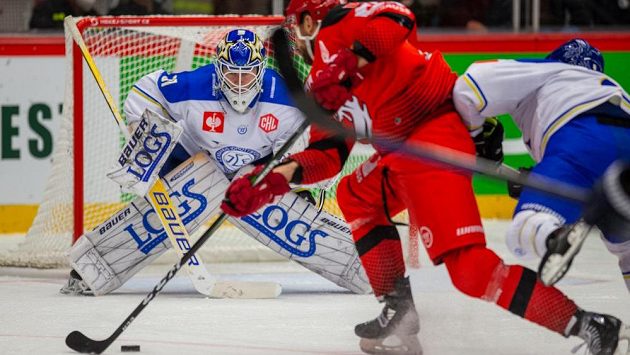 What about Czech champions? The hockey players of Třinec walk in the Champions League from defeat to defeat, and did not even win on the fourth attempt. The steelworkers hosted Swedish Leksand on Saturday, but lost 1: 3 and definitely lost their chance to advance from the group. The same goes for Mladá Boleslav, who lost on the ice of IFK Helsinki 1: 2. Of the Czech representatives in the Champions League, only Spartans have two winnings, who will host the Finnish TPS Turku in Holešovice on Sunday from 5 pm.

Goalkeeper Kasimir Kaskisuo from Leksand was a big obstacle for the hockey players of Třinec.

Třinec needed to win in the basic playing time in order to keep his hopes of advancement, however, in a duel with the Swedish sovereign, who has not yet lost a point in the basic group of the Champions League, he pulled from the beginning to a shorter end. The fight was made more difficult by the home team and the absence of the elite gunner Martin Růžička, who appeared in the match record but did not start. The coaches shot eleven attackers and the defender Jakub Matyáš also appeared atypically on the wing.

Paradoxically, the steelmakers worked out an excellent opportunity to open the score, but Miloš Roman did not mature on goalkeeper Krasimir Kaskisuo. The first goal was scored only in the 33rd minute, when four seconds after the return of the disqualified Milan Doudera, Patrik Zackrisson made his mark. Alexander Lundqvist added a second goal at the beginning of the third period with a shot from the blue line. In the 50th minute, Max Veronneau took advantage of the power play.

Another goal in Czechia and @hcocelaricz need to start turning this game around if they want to be in the CHL Playoffs later this year…📢#ChampionsGoBeyond pic.twitter.com/mbekij1cd7

The Swedes overshot the Steelworks 36:18 and Michal Kovařčík scored an honorable success with a shot from the left circle in a power play less than five minutes before the end of the match at 0: 3. The result of the home team’s change without the goalkeeper did not change anything. In the remaining two matches with Slovan Bratislava, Třinec can defend a maximum of third place in the group F table.

🚨! THE HOME TEAM KNOCK ONE BACK!

This game isn’t over yet – @hcocelaricz knock one back and are fighting to the final minutes! 🔥#ChampionsGoBeyond pic.twitter.com/DTO6BORnR9

Unlike the Steelmakers, Mladá Boleslav has at least one point, but even that is not enough for the Skating Club, it can forget about the progress from the group. Although Středočechy got Rašek in the lead at the beginning of the second period, the home team equalized in the middle part and Teräväinen scored the winning goal at the beginning of the third act.