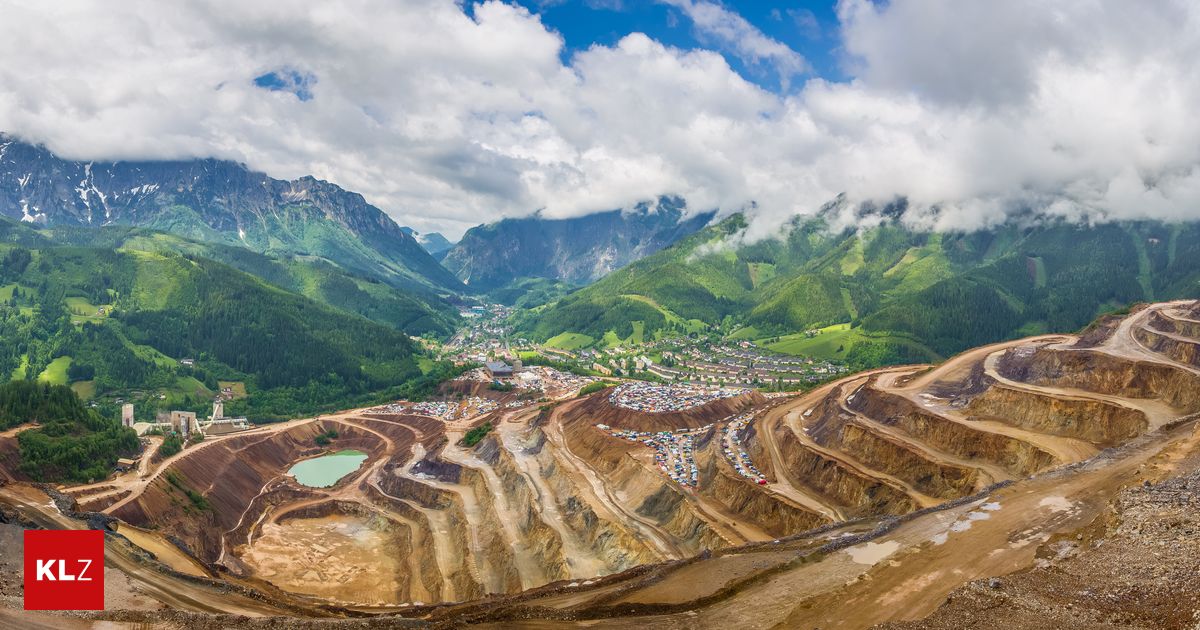 A long hiking trail leads in ten stages around the Eisenerz Alps in the heart of Styria. The “Styrian Iron Trail” connects natural gems with industrial landmarks and cultural centers.

The very black viper seems tired and disinterested, crawling on the wooden planks of the bridge in the direction of the embankment. In the case of their discoverers, however, the spontaneous encounter with the reptile acts as an accelerator of impulses. The moment of shock ruined the circuit at the beginning of the speed range where it arrives a little later anyway.

The trigger is not a snake, but the wavy lines where the path leads up the throat. It is steep. No: it is very steep. This section of the course is called “im shot”. Understandable if you walk in the opposite direction, as Archduke Johann once did when from the top of the Hochschwab via the Sonnschienalm to the Leopoldsteinersee and then to Eisenerz. It was July 1803.

The striking Zeiritzkampel, 2,125 meters high in the Eisenerz Alps, is one of many scenic mountains along the new long-distance hiking trail
© TVB LEOBEN / WEGES

In September 2022, this route is part of the “Styrian Iron Trail”, a newly equipped long-distance hiking trail in the heart of Styria. There are about ten stages around the Eisenerz Alps. The whole route covers two hundred kilometers and the topography is kind to you.

First, the muscles can be warmed up with three rather flat phases. From St. Michael you hike to the Trabochersee in the Liesingtal. Calculated in running size, by the end of the first day you already have your first half marathon in your legs. On the second day, there is a short detour along the 52 kilometer long “Marterlweg” – 48 shrines with religious motifs lined up like a string of pearls – and via Kammern to the ruins of Kammerstein.

The ten stages of the Styrian Iron Trail
© KLZ / Infographic

A first test of conditions and material afterwards is the sometimes steep and in some places a bit “breezy” Rittersteig, before the trail descends downstream to Mautern. The pace of the walk challenges the area with unusual views of a landscape you usually only know by speeding through the Pyhrnautobahn.

If you want to book your “animal watching account” here for safety, you can do so on the opposite side in the “Wilder Berg” zoo. If you prefer the “desert”, you don’t have to wait beyond phase 6. The foot of the Hochschwab massif is almost a guarantee to see the chamois, further towards the summit there can also be ibex.

View on the Leopoldsteinersee
© Tourism of Styria / Manfred Polansky

The namesake of iron

But first you have to walk in the middle of the Erzberg. Coming from Ramsau to Eisenerz, the homonymous “Iron iron of Styria” appears hesitant at first. But it quickly makes its way into the picture with its extraordinary extraction terraces. The pyramid shape emerged from the 1890s, when stepped open pit mining was introduced. In 1907 there were still 60 steps with a height of twelve meters, but in 1928 the number was halved to 30 steps. Each 24 meters high, they give the Erzberg its current appearance.

A summit ascent is not on the tour program as part of the long-distance hike. The route leads instead to the Leopoldsteinersee. “It is half an hour long, extremely deep and surrounded to the north by the sea walls and the Arzeralpe; it is said that sailing in strong winds is very dangerous, like most of these mountain lakes, “Archduke Johann wrote about 120 years ago about this popular excursion destination.
Together with the Green Lake, it tops the ranking of attractions in the “Water” category on this long journey.

March of the water!

Depending on the taste and the season, they outdo each other with a dream alpine lake idyll – currently with obvious advantages for the Leopoldsteinersee. The water level, typical of late summer and is even lower due to low rainfall, is currently turning Green Lake into a sad narrow-gauge version of its current splendor. When you hike along the dried up coast, you at least have an idea of ​​what’s not there.

However, you will still be visually spoiled two floors higher: the “Iron Trail” leads along impressive rock faces after the steep ascent from the Leopoldsteinersee through the Fobis- and Androthalm. Initially on rolling meadows, the path then winds through dense carpets of pine trees. The ground here is “perforated” – sinkholes of all sizes transform karst into a landscape of high mountain craters. Instead of narrow panoramic aisles in narrow V-shaped valleys, a panorama that embraces the horizon opens up before you with a generous view. Hours later, when the Kaiserschmarren in the Sonnschienhütte has already passed and the night has engulfed the rugged Hochschwab massif, a sky full of stars overlooks the Alm.

The seventh day begins with the descent to the bottom of the gorge, where cows graze framed by vertical rock faces, a narrow stream flows and the high midday sun requires only a short shade from the few trees. On the way to the Lammingsattel, the “Eiserne Weg” shows once again what it can do in terms of climbs, before the remaining stages of the day from Vordernberg tend to be downhill towards the finish in Leoben.

The planners give the total travel time as 66 hours. A vague guide, nothing more. Various viewpoints are too enticing on all phases, prolonging the “wake up, walk, eat, sleep” rhythm.