Slovan – Třinec 1: 4, Steelmakers without a number of supports said goodbye to the Champions League in Bratislava 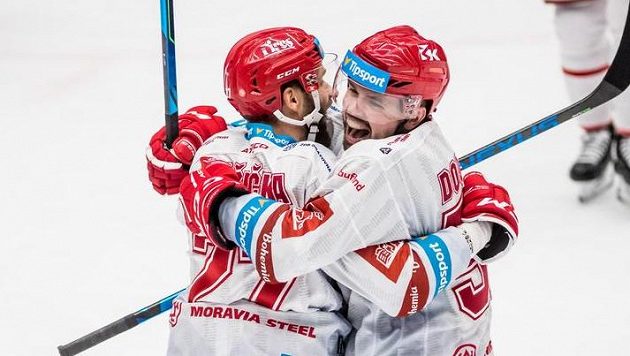 The hockey players of Třinec said goodbye to this year’s Champions League by winning on the ice of Slovan Bratislava 4: 1. The Slovak team was defeated by coach Václav Varadi’s charges just like last week at home (3: 0), but in group E they only scored with him and finished third.

From left Martin Růžička from Třinec and Milan Doudera rejoice at the goal – illustration photo.

Among the juniors and players from the first-league Frýdek-Místek, forward Matouš Čmiel made the competition premiere in the first team of the Steelworks. After the goalless first period, Třinec took the lead after 22 seconds of the second part. Patrik Hrehorčák, in his own weakness after a misunderstanding of the goalkeeper Samuel Hlavaj with the defender Andrej Golian, won the puck behind the goal and pushed it at the left post.

In the 27th minute, Michal Beňo erred behind the goal, Jonáš Peterek seized the puck and after his pass, Michal Ramik headed for the open goal. In 48 seconds, Miloš Roman shot Hlavaje from the left side from an angle. Kristers Gudlevskis then stood in the goal.

Ondřej Kacetl collected in the goal of the Steelmakers in the match only in the 34th minute, when he was overtaken in the power play by the American striker Andrew Yogan. In the time of 43:08, the result was completed by Vladimír Dravecký, who switched the puck from forehand to backhand and overtook the Latvian goalkeeper Slovan.

Our 2021/22 Playoff line-up is complete! Here are our 16 qualifiers seeded into their two respective pots.

See you at the Playoff Draw this Friday at 12:00 CEST! 👉 https://t.co/ORYQ6v4FDX#ChampionsGoBeyond pic.twitter.com/wNp0Id3SNB