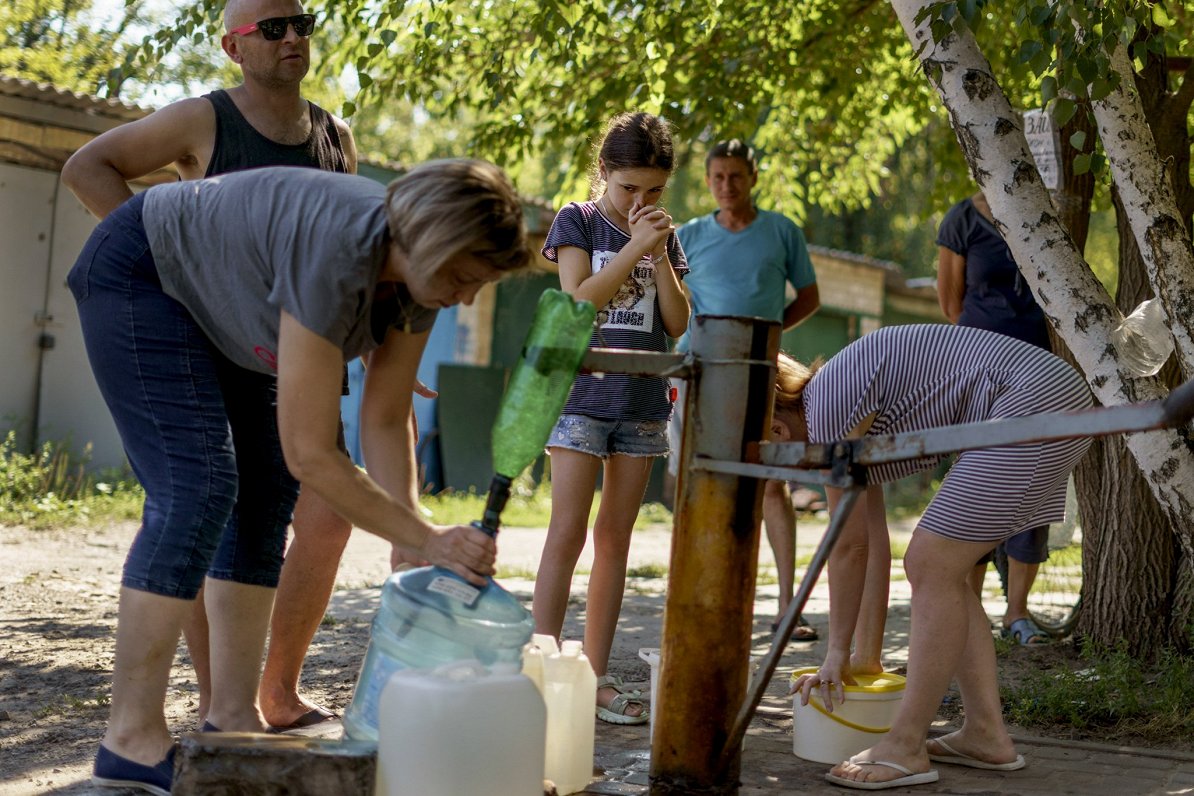 Ukrainian President Volodymyr Zelenskiy has called on the residents to leave their homes and go to a safer shelter, especially until winter, because the region will soon run out of gas and become uninhabitable.

In many cities in eastern and southern Ukraine, the infrastructure is so devastated that neither heat nor water is available. In Slovyansk, Donetsk region, there is only one place left where you can get drinking water. The remaining people in the city go there every day, risking their lives.

The only way to get to the water

The rumble of artillery in the distance mingles with the crowds of people gathered at the Sloviansk public water pump. It breaks the terrible silence that has settled in the empty and deserted streets of the city, even for a moment. And here too, everyone stays for a very short time. The public water source has been the only way to get water for several months now, as the city’s infrastructure has been almost completely destroyed by the constant attacks.

“Without water – neither forward nor back. I carry 60, 80, 100 liters every day, as it turns out, and it’s still not enough. I try very hard to save. But it’s hot,” says Ninela Kislovska, a resident of Sloviansk.

“I don’t wash more than once, I don’t do laundry. But I have to wash the dishes, I have to cook something. In the summer, I prepare preserves for the winter. I don’t understand at all how there can be such a person who denies other people water. Bread, water and air are sacred things.”

We take risks. But what else is left?

Lubova Malija also fills water in plastic bottles and delivers it to homes. And patiently, step by step, he pulls the cart to the upper floor. She pours into the dishes as much as she can.

“There’s bombing, sirens sound, but we still go for water. We’re taking a risk. But what can we do. We want everything to be clean.”

In the water brought from the city, Lyubova puts a bone for broth and cooks root soup. It is the moment when she can feel normal in the abnormal everyday life of war.

Meanwhile, right there, outside her window, other residents of Slovyansk are measuring the way to the city’s only water artery with bottles and cans at hand and in carts, hoping that they will not be surprised by the projectile sent by the enemy.

On February 24, Russian President Vladimir Putin ordered to start invasion of Russian troops in Ukraine. Putin claimed that NATO was going to use Ukraine as a springboard for aggression against Russia, although there was no evidence for these claims. Ukraine believes that Putin’s real goal is to destroy Ukrainian statehood and bring the territory under Moscow’s control.

Russia’s aggression against Ukraine has caused a general condemnation of the international communityagainst Russia is done more and more sanctions are introduced. Many western companies have decided to leave the Russian market.

Highlight the text and press Ctrl+Enterto send the text fragment to be corrected to the editor!