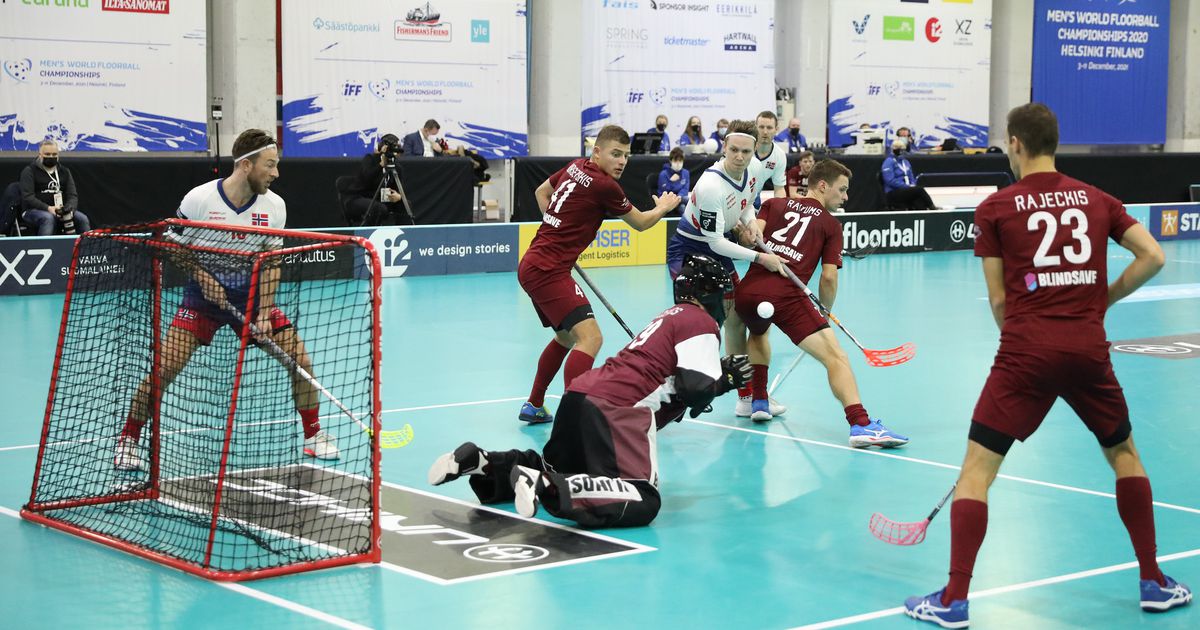 The first period in a similar fight ended without a goal.

After Pēteris Trekše’s pass, the defender Artūrs Jurševskis sent the ball in the empty upper right corner of the goal parallel to the goal line in the 23rd minute, revealing the result in the game – 1: 0.

2: 0 in the counterattack in the 34th minute was achieved by Rolands Kovaļevskis, who, after another pass from Trekšes, got alone against the Norwegian goalkeeper Markus Jelsnes, sent the ball into the goal from the goalkeeper’s line – 2: 0.

Only 28 seconds later, after a similar counterattack, it was 3-0, and Moricas Krūmiņš was left to hit the goalkeeper alone in front of Kevin Schmidt.

In the middle of the third period, Ūle Mosins Ūlesens reached 2: 3 in 83 seconds during the rejection of Jānis Ragovskis and Arvids Vibrings Lindqvist, but the final result of the match was recorded by Trekše – 4: 2 in the majority 95 seconds before the end of the match.

In the first game of the championship, the Latvians were the first to score, but lost one of the tournament favorites to Sweden with a result of 1:11. In the second match, Latvia played a draw with Denmark 5: 5, but in the third game, Finland conceded 2: 7. Taking the third place in the group, Latvia had to start the elimination tournament from the eighth final, in which Canada was beaten 16: 3. On Wednesday, the Latvians lost to the Czech Republic in the quarterfinals with a result of 1: 9, but on Friday in the semifinals they overtook Slovakia with 6: 2.

Norway lost to Switzerland (5: 7) at the start of the championship, then defeated Germany (7: 4) and lost to the Czech Republic (3: 7) at the end of the group tournament. Poland was defeated 7: 3 in the eighth final, Sweden lost 2: 8 in the quarterfinals, and a difficult 5: 4 victory over Estonia in the semi-finals.

In the group tournament, the teams played with each other. The owners of the first two places in groups A and B immediately advanced to the quarterfinals, while the owners of the third and fourth places had a duel with the two strongest teams in each group in the second echelon.

A total of 13 tickets were available for 35 teams through the qualifiers. The current Finnish champions had already secured a place in the World Championships, but Canada and the United States also won automatic races in North America to promote the sport.

The head coach of the Latvian national team, a Finnish specialist Rīhimeki, has included two goalkeepers, seven defenders and 11 attackers in the national team’s twenties.

The largest representation is from the Cēsis “Lekrings” unit – five players, followed by three players from “Lielvārde” / “FatPipe”. Two players are from Talsi NSS / “Krauzers”, but each player is from four teams – “Oxdog Ulbroka” / LU, “Kurši”, “Ķekava”, “Ogres Vilki”. Three players are from the Finnish team “Koovee”, and two more from other Finnish teams – “Nokian KrP” and “LaSB”, as well as one player from the Swiss team “Jets”.

Composition of the Latvian men’s floorball team for the world championship: