Argovia Pirates away against the Whoppers 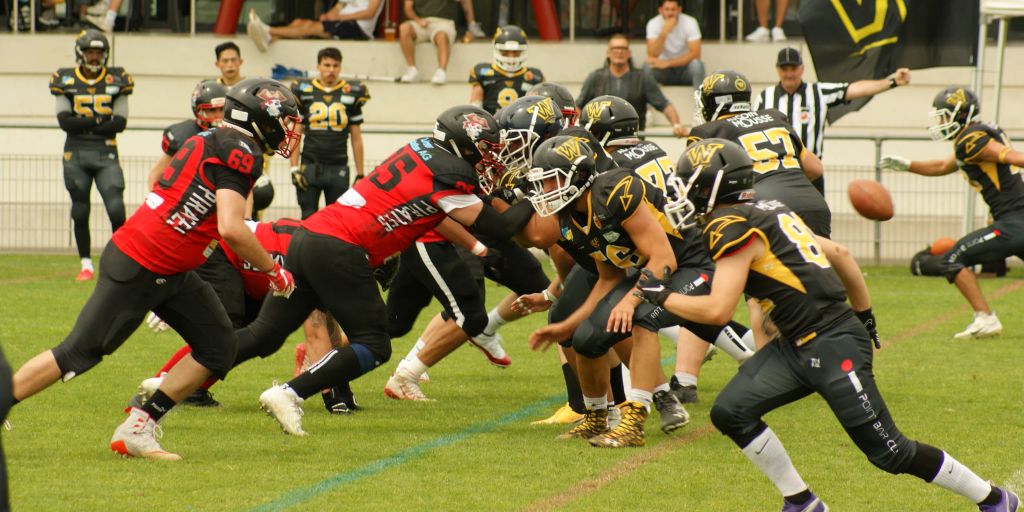 Despite a highly motivated home team, the Pirates were able to easily win against the Whoppers in an away game.

After the long journey, the guests from Aargau in Geneva were greeted by an almost tropical climate. The home team, the Geneva Whoppers, was manageable in terms of the number of players – but we know from the Geneva team that they are always highly motivated, especially at their home games, and fight hard right up to the last second.

The offense of the Argovia Pirates opened the game, but shortly afterwards had to give up the right of attack to the Whoppers. Their defense was wide awake from the first second and played their hard-hitting football. But the Pirates defenders were also awake – Alban Fetoski was able to intercept the ball on the second play of the Geneva team and carry it into the opposing end zone for a touchdown. A so-called pick-six – and also the extra point (“point after touchdown” or PAT for short) was converted by Alex Kopp.

After further attack sequences, each of which could be stopped by the opposing defense, the Argovia Pirates regained possession of the ball in the second quarter. With a 20-yard pass from quarterback Cédric Waser to former U19 player Denis Hofer, the Pirates managed to win their second point in Geneva (the PAT failed this time, however).

These points for the Pirates gave the Whoppers the right to attack again. But Alban Fetoski was able to regain the ball in the 6th play with his second interception of the day. This gave the Pirates a very good field position on the opposing 33-yard line.

Good runs from running backs Abdulwasi Kadir and Mathias Frey carried the ball to the 1-yard line. From there, QB Cédric Waser was able to carry the ball into the end zone with a quarterback sneak – and this time the extra point from Alex Kopp was successful again. But the Whoppers never give up – that was well known. Shortly before half-time, they managed to connect (with a valid PAT) to the half-time score of 7:20 thanks to a very fast passing game.

The 3rd Quarter was dominated by strong defensive performances – neither team managed promising attack sequences or even points. Only in the fourth quarter did the Whoppers stomp their way forward again – yard by yard they fought their way towards the end zone of the Pirates. They then managed the touchdown with a pass, and the extra point was saved by the Pirates.

Now the Pirates were on the attack again, with an outstanding Abdulwasi Kadir, the offense also gained yard for yard up to the field goal distance. From there, Alex Kopp was able to successfully score the field goal, and these were the last points in the game (final score 13:23). Another and very important victory against a very stubborn opponent.

Next Saturday, May 28, 2022, the Argovia Pirates will meet the Bears again at 2 p.m., this time in the second leg in St. Gallen. The Bears are still the undefeated leaders and we can expect another super interesting game.