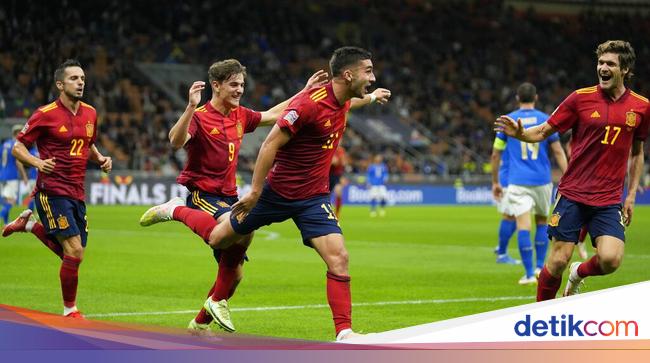 Spain is currently just waiting for the winner in the match Belgium vs France, Friday (8/10/2021) early morning hrs. The duel took place in Turin and the final was played in Milan.

Italy threatened Spain in the fourth minute. Federico Chiesa fired a shot from outside the box, but Unai Simon was able to parry the ball well.

Two minutes later it was Alessandro Bastoni’s turn to threaten Spain from outside the penalty box. The Inter Milan defender’s shot was still aiming right at Unai Simon.

Spain is still having trouble making threats to Italy’s goal after the game has been running for 10 minutes. The game of short passes made by Luis Enrique’s team can still be anticipated by the 2020 European Cup winners.

Spain’s good chance is in the 12th minute. Gianluigi Donnarumma was tricked by Pablo Sarabia’s cross and Mikel Oyarzabal then fired from close range, but Bastoni blocked the ball.

Italy conceded in the 17th minute. Mikel Oyarzabal’s cross was struck by Feran Torres and gave Spain a 1-0 lead.

The Gli Azzurri players were very active in applying pressure as the Spaniards played their short passes. Marco Verratti and Jorginho were some of the players who didn’t stop running towards the ball.

Federico Bernardeschi almost tore the Spanish goal in the 34th minute. From the right he stabbed into the box and fired a shot, but the ball was parried by Unai Simon before hitting the post.

A minute later Lorenzo Insigne wasted a golden opportunity. The Napoli player’s shot went wide of the target, even though it should have been able to produce a goal because it was in a free situation.

Italy had bad luck in the 42nd minute as Bonucci was shown a second yellow card for his elbow hitting Sergio Busquets in the air in an aerial duel. Bonucci’s first yellow card was obtained in the 30th minute for a loud protest to referee Sergei Karasev.

Italy conceded again in first-half injury time. Oyarzabal crossed again and the ball was met with Ferran Torres’ header to put Spain 2-0 up until halftime.

Superior in the number of players, Spain locked Italy in the first 10 minutes of the second half. The Azzurri defended well and had a chance on the counter-attack, but Chiesa was caught offside.

Spain almost increased the advantage in the 62nd minute. Oyarzabal’s header ball in the mouth of the Italian goal is still slightly wide.

Donnarumma made a great save in the 77th minute. The Paris Saint-Germain goalkeeper managed to ward off Marcos Alonso’s shot from close range.

Italy managed to reduce the defeat to 1-2 in the 83rd minute. Chiesa managed to snatch the ball from the Spaniards and went head-to-head with Unai Simon. Chiesa did not shoot, but thrust the ball to Lorenzo Pellegrini which was completed for the goal.