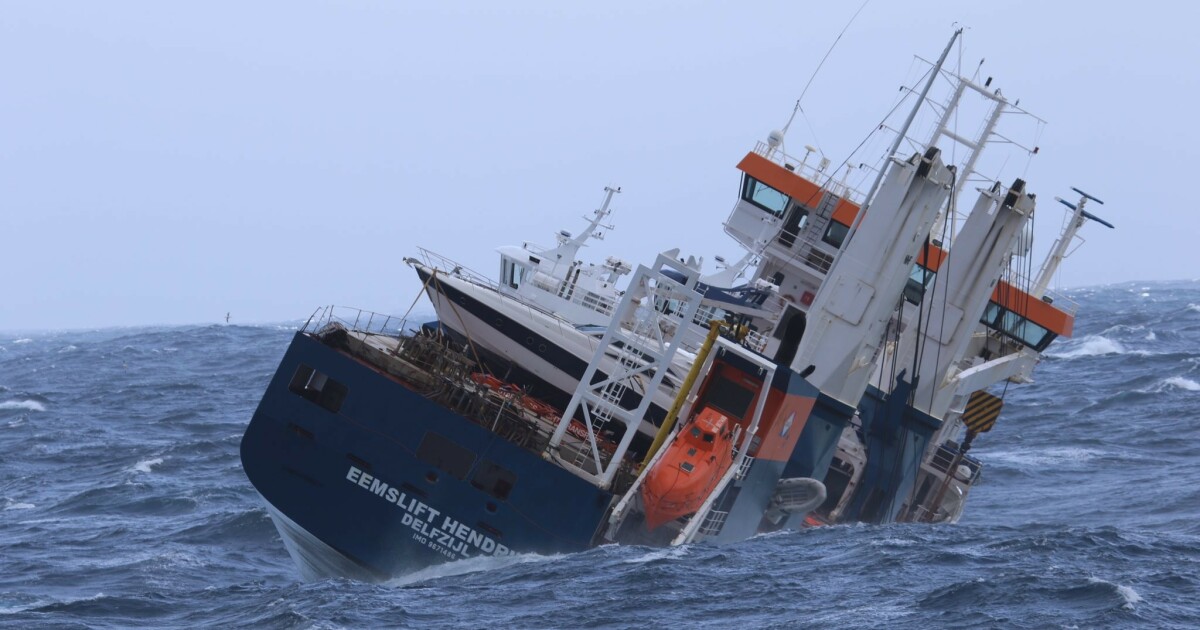 On Wednesday night, the crew from the Dutch salvage company Smit Salvage managed to get on board the «Eemslift Hendrika».

At 22.42, the Norwegian Coastal Administration announces that the tow is underway, and the risk of grounding has been averted.

– The tow is now stuck in the bow and the tug Normand Drott begins to gently turn the casualty around. The plan is to tow the vessel into Breisundet outside Ålesund for further inspection, writes the Coast Guard.

The weather in the area has made it difficult to put personnel on board at an earlier time.

– The weather has been extremely bad, but now it is fortunately better. Yesterday we had a wave height of up to 18 meters. Today it has sunk and it is down to three to four meters. The wind has also lied a lot, emergency director Hans-Petter Mortensholm at the Norwegian Coastal Administration told Dagbladet TV at 10 pm on Wednesday night. .

Rescue crews were brought down to the casualty from a helicopter.

– We are also preparing for the worst, but there is probably a greater probability that we will succeed with the work that has been initiated, the emergency director said to Dagbladet after the crew was put on board.

There are four people in the team who are now staying on the casualty. The assignment is not risk-free, according to Mortensholm.

– But the personnel are trained and experienced, and this is where they work, so we are confident that the risk assessments they make are good and that they will succeed.

Fight against the clock

The Dutch ship sent out an emergency signal on Monday morning after the cargo shifted and the ship capsized in the North Sea. That same evening, the ship lost all engine power and has since then drifted ashore in the bad weather.

On Wednesday night, the vessel drifted directly towards Stadlandet at a speed of approximately 1.5 knots, and the distance was around 10 nautical miles to land.

According to the Norwegian Coastal Administration, there was a danger that the vessel could drift ashore within approximately eight hours, and a government action was therefore initiated to bring the ship to safety.

– As a result of the imminent risk that the vessel will be able to drift ashore during the night, the Norwegian Coastal Administration has declared a state action from 7 pm tonight. Full mobilization of oil spill response resources in the area has been initiated, it is stated in the press release sent by the Norwegian Coastal Administration around 7 pm on Wednesday night.

Director of Emergency Management Hans-Petter Mortensholm stated in the press release that conditions have changed during the afternoon and evening, and the Norwegian Coastal Administration is concerned that the vessel does not follow the runway on which the original plan was based.

– We are therefore setting government action now, so that we have the opportunity to tow the casualty. At the same time, we are preparing for a worst-case scenario where we get a grounding, Mortensholm said.

He explained to Dagbladet that the driftwater calculations showed that the vessel would continue north.

– So we considered that we had more time, but we now see that the course is not completely in line with the calculations. We do this to be careful, so that we do not get into a situation that in the worst case ends up with the casualty going aground, Mortensholm said and adds:

– This is the best we can do now. The second is to sit and watch it run aground.

Was scheduled for Thursday

-Originally, the plan was to start in the action on Thursday morning.

– But the driftwater calculations are very variable, and with such a high degree of uncertainty, we believe that measures must be implemented, Mortensholm said.

The Norwegian Coastal Administration has also chosen to mobilize the oil spill response, and puts out oil spill response equipment both at sea and on land, so that this is clarified if the operation is not successful and the casualty runs aground.

This is because the area contains particularly vulnerable natural areas, such as Fugleøya Runde, and the Norwegian Coastal Administration does not want them to be exposed to the strain of an oil spill.

In the event of a report of, or imminent danger of, a major case of acute pollution, the Norwegian Coastal Administration’s environmental emergency service will mobilize emergency personnel and equipment from municipal and state emergency preparedness organizations.

If government action is implemented, the Norwegian Coastal Administration decides which measures are to be implemented and takes over tactical control over available equipment and materiel.