The principal says no to mass testing of students 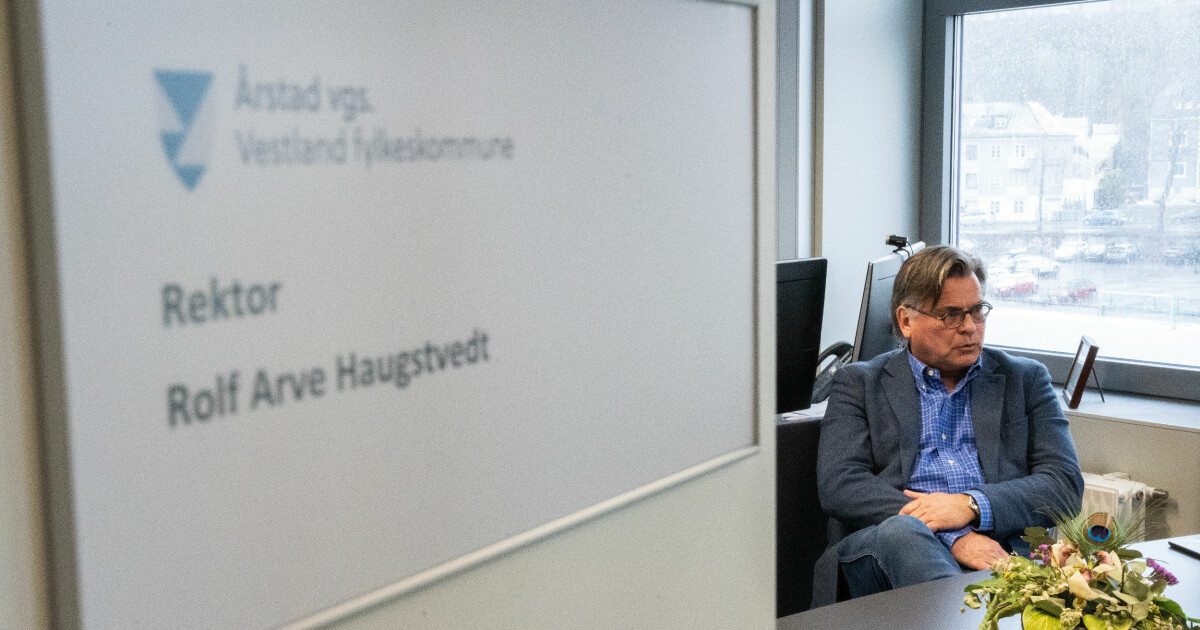 On Thursday, TV 2 was contacted by an employee at Årstad upper secondary school who is worried and frustrated that the school management has refused to participate in a mass testing project.

– We are several teachers who are concerned and who do not understand that the school will not participate in mass testing of students, says the employee at Årstad upper secondary school to TV 2.

The person in question says that employees have been told that mass testing is far too much to administer for the school. The teacher wants to be anonymous.

– This is a mockery of teachers who are in the middle of a demanding situation, says the person in question who are employees at the school which has 950 students and 200 employees.

Several of the staff at the school are said to have been surprised and upset when it became known recently that the school has refused mass testing of the school’s students.

– We are concerned about health and I have heard rumors that a teacher in Vestland county was infected with corona, and died. Employees are upset that the school management has said no, TV 2 is informed.

TV 2 has received confirmation that a teacher at a high school in Vestland county was infected with corona and died.

The rumor has spread and this has created unrest among some teachers in the school. TV 2 is aware of which school the man worked at, but for privacy reasons TV 2 does not state where he or she lived or worked.

– Many teachers are worried because students do not comply with the infection control rules, they sit close together in groups during free time and many do not respect distance rules.

– We are skeptical that teachers will take over health tasks. We believe mass testing interferes too much with training and the measure is not in proportion to the gain, says principal Rolf Arne Haugstvedt at Årstad upper secondary school.

– At the time we received the offer, we found out that we would not be able to line up with the resources needed to participate in mass testing of students, Haugstvedt says to TV 2.

– Do you understand that some of your employees are worried. And maybe also more students?

– Yes, I understand the concern and they have reason to worry. My responsibility is to ensure that there is a relationship between the measures we take and the effect we achieve.

– Do you stand by the decision?

– So far, I feel that we have made the trade-offs that have been right in that situation.

Haugstvedt states that both shop stewards and the chief safety representative support the decision not to participate in the project at this time.

The principal states that an older school building, divided into three buildings, of a total of 33 thousand square meters makes the task extra demanding. He also fears that mass testing creates false security and believes that the testing so far is not sufficiently evidence-based. The use of time is also a factor that weighs against.

Several schools are signing up

While Årstad high school has said no so far, Vestland County Municipality has expanded the project by mass testing students and school staff to another 24 upper secondary schools in Vestland County that are preparing to start mass testing of students. Many of these are in Bergen.

– Do the other schools think wrong or do you have such a special school and unique situation?

– I do not know what the others emphasize. They probably think that this is unproblematic or that they are able to implement it.

– Is there something about your school that makes you not participate, after all, many others have said yes? And the measure is supported from several quarters.

– We do not see that we can manage to do what was necessary to be able to participate properly in such a project, Haugstvedt states.

At a meeting on March 24, the school received information about the project and just before Easter, the school decided to refuse to participate.

– Too much extra work

The national association of schools tells TV 2 that they have talked to the club leader and member at Årstad upper secondary school.

– He says that this has been discussed with the organizations and the management. All parties are positive to mass testing, but as the plan is outlined from the county municipality, it will involve a lot of extra work for both teachers and the administration, says Terje Moen, first deputy head of the National Association of Schools

It is unrealistic for a school to have to set aside 1-2 man-years to administer this without additional resources, says Moen, who says that teachers also experience that they will lose valuable teaching in a busy everyday life.

– But as I said, everyone is positive about mass testing, but you have to find solutions that address the concerns that Årstad high school has, Moen states.

TV 2 has asked the Education Association for comment on the case and the concern reported by employees. The association states to TV 2 that it is not possible to give any comment today.