Before being expelled from Bulgaria, at the age of 16 she was expelled from all schools and forced to educate herself in the countryside, and today she is among the leading geneticists in the world.

Professor Dr. Nesrin Yozeren, a native of the Dulovo village of Paisievo, is president of the Association of Microbiologists in Turkey. The professor is the head of the laboratory of molecular biology and genetics at the Bosphorus University in Istanbul.

The university is the only higher education institution in Turkey that has been ranked among the top 200 universities in the world for three consecutive years. 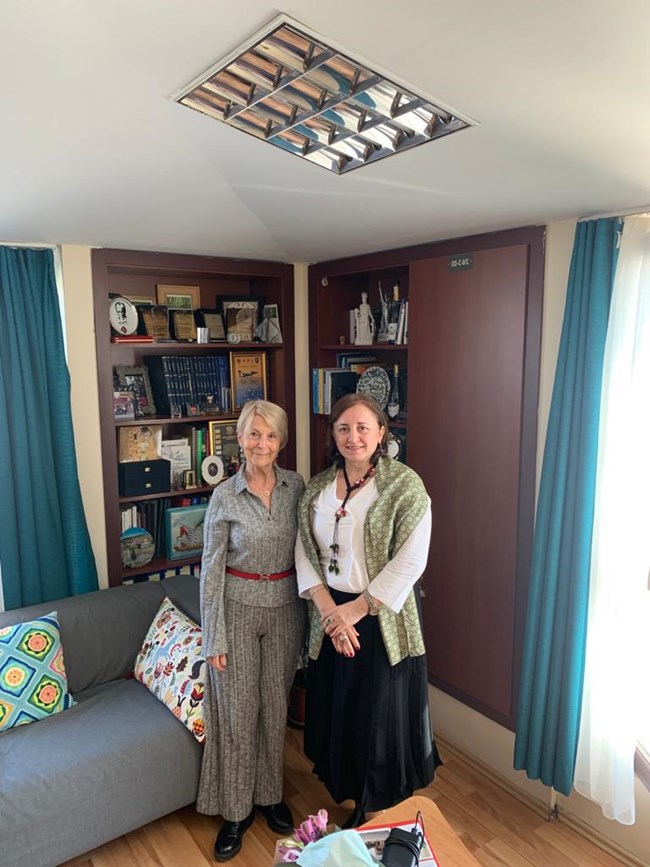 A team led by her is working on a project to create a protein-based coronavirus drug and vaccine.

“In our coronavirus protein vaccine project, we use ASC microsphere technology, which is different from all developed so far and is original. ASC microspheres (particles) are proteins that control a number of processes in the body, they are like the conductor of an orchestra. While studying the problems of the resistance of the human immune system to microbes, we discovered the role of microspheres. They represent a natural structure in the cells of a living organism against microbes and we used this in the coronavirus vaccine project. At the same time, the microspheres allow

We developed this technology ourselves, without copying from anyone else, which is why I believe that we are inventors and that it will be a breakthrough in the fight against COVID-19. Animal tests were successful. I am confident that in the coming months we will move on to phase 1 and 2 trials (on volunteers), after which we will be able to offer our vaccine. “We plan to create a drug against the coronavirus in a few months, and by the fall to have an approved protein vaccine,” she told 24 Chasa. The researcher already has a patent on the technology. This technology is the result of her many years of work as a geneticist and oncologist in the field of programmed cell death (apoptosis). And after the work on the coronavirus preparations is finished, we continue with the same technology to develop a preparation for melanoma – a type of skin cancer with a severe prognosis.

The personal story of Professor Nesrin Özören is incredible. She was expelled from Bulgaria while she was 16, in the 9th grade. Born in 1974, Nesrin was accepted with excellent results at the language school in Silistra.

But the campaign for the forced change of the names of the Turks in Bulgaria breaks the fate of the excellent student. The despair she feels at being forced to deny her name and accept something foreign pours into a secret diary. But a search revealed her diary. Interrogations followed by the police, the teachers’ council, and she was reprimanded in front of her classmates.

“I wrote in my diary that I was Turkish, that I felt like that and that I did not want a Bulgarian name, that I should be like the Remsists, like the Soviet Young Guards, not to bend, but to resist injustice, to be an example. When they brought me before the teachers’ council, they asked me to renounce what I had written and said that if I did, they would forgive me. But I had done nothing to feel guilty, and I did not plead guilty. And now I would do as I did then, because I believe that the essence of man is what he is. The important thing is to believe that he has taken the right path, the 47-year-old professor is adamant.

The punishment is the most severe for an excellent student – she is expelled from high school,

without the right to

Nesrin is actually one of the youngest people in Bulgaria to be run over by the roller coaster of communist power.

After being expelled from high school, she had no choice but to return to the countryside. During the day he works with his parents at the levels, and in the evening he educates himself at home. Together with her parents, they were among the first to be forcibly sent by plane to Vienna for resisting assimilation policies.

After arriving in Istanbul, Nesrin successfully took the upper class exams and continued at Terjuman High School, graduating with honors.

Following are exams for the Bosphorus University, which she won and which completely changed her destiny. Initially, he intended to study computer engineering, but biology prevailed and he completed the second major in Molecular Biology and Genetics.

“I wanted to prove that I could

to live up to the expectations of my parents and I am happy that I succeeded. In science, it is very important to follow the path you have chosen, if you give up, then the path is over, “she said.

He is defending his doctorate in the United States. She is getting married. She and her husband have been working at an American university for 9 years.

Their son, who is now a psychology student in Istanbul, was born in America.

After returning to Turkey, Nesrin, now an associate professor at his favorite Bosphorus University, founded the Programmed Cell Death and Cancer Immunology Laboratory.

The “ASC Particle / Microsphere Vaccine Carrier” technology makes it possible to send and store vaccines anywhere in the world without the need for a cold chain, ie. allows to store up to 30 days at room temperature. We have patented our invention in the USA, Japan, Europe and China. “Our invention is the only one so far in Turkey and in the region that holds 4 international patents in the field of biology,” she said.

According to her, this will allow Turkey to export vaccines to poorer countries – in Asia, Africa, which are experiencing the worst consequences of the lack of sufficient vaccines.

Work on vaccines in Turkey began after the swine flu epidemic. At the time, Turkey could not provide enough vaccines. It became clear that even if you have a lot of money, you will still have to wait your turn to depend on the manufacturer. This is what prepared the ground for the importance of having a vaccine.

“Even after 2015, vaccine projects began to be offered. The COVID epidemic intensified this process, then a number of biological developments came to the fore, and it became clear that there were scientists who were quite advanced. As part of the measures against COVID-19, a consortium has been set up in Turkey to authorize projects to find drugs and a vaccine against coronavirus. The projects, after the respective approval, are financed by the state “, she adds.

“It may take 2-3 years to complete COVID-19. It was estimated that if 8 million people were vaccinated in 6 months, the virus would be defeated, the borders would be opened. But this is not real. I think that in addition to vaccination, each country should also restrict movement, do tests, quarantine. I know that it is difficult – for tourism, for the economy, but we must act rationally. We should not be paranoid about viruses. So far, I think the work of finding vaccines is going well, so many vaccines have been created in one year that have not been made before, and this is due to the development of molecular biotechnology, which has advanced worldwide, explains the scientist.

According to Prof. Yozioren, thanks to COVID-19 in Turkey, very significant progress has been made both in projects for the invention of the Turkish vaccine and for the development of molecular biology.

“At least 5-10 types of COVID-19 vaccine technologies of different types are to be launched in Turkey. One of them will be ours, which is protein. I want to emphasize that it is a completely independent development, we do not cooperate with anyone, we do not have such a need. I believe that the time is not far when Istanbul will become a center of molecular biology, because there is potential for that. Personally, I dream of founding an institute of microbiology, where we can support the innovative crazy ideas and projects of local and foreign scientists. “

the appeal of deputy LREM Mustapha Laabid is...

A rector without lights | Radio Leon

This is the weather forecast for Friday morning...

Selection of projects to watch in your region:...

The Civil Guard plans to incorporate a marine...