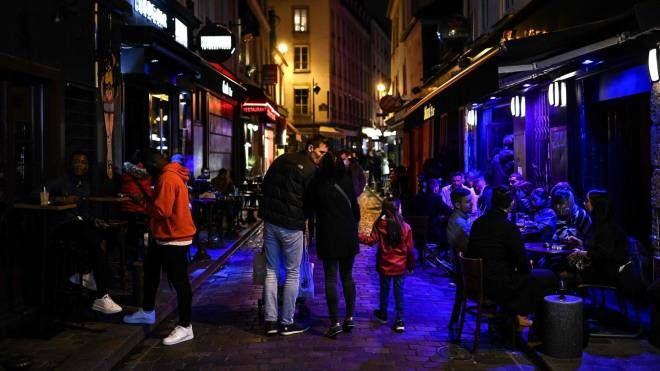 Rome, 5 October 2020 – The France attempts to stem the out-of-control epidemic of Coronavirus with a turn of the screw, starting from the premises. It is of particular concern the increased pressure on hospital facilities. The tightening of the health rules on Paris – passed last night in the area of ​​’maximum alert’ (scarlet red on the maps) – “will remain in force for 15 days” at the end of which “a verification with maximum transparency” will be made on the evolution of data of the pandas, said the prefect Didier Lallement presenting the new measures in force from tomorrow in the French capital. “It’s a new stage, you have to rise to the challenge,” said Lallement. “The epidemic is going too fast, we need to slow down now to prevent our health system from being overwhelmed”, warned the prefect. THE bars will be closed from tomorrow for 15 days, while the restaurants will stay open with a enhanced restrictions protocol. Alcohol consumption in the streets will be prohibited, the markets will remain open. Gyms and swimming pools will be closed, but they will remain open only for minors. Fairs and congresses also closed. The frequency will also be halved university. Meanwhile, the new French bulletin records 5,084 new infections and 70 deaths from Coronavirus, a ‘soaring in deaths, compared to 32 on Sunday and 43 on Saturday. Infections are down, but this is a figure that could be affected by the slowdown in registrations over the weekend. In the last seven days there have been 7,294 new hospitalizations, of which 1415 in intensive care. The total number of deaths reached 32,299.

Read Also:  Without tests, there would be no corona

Covid, the Italian bulletin of 5 October

Spain registered in the weekend an increase of 23,480 contagionsmaking it the first Western European country to have had 800,000 cases in all since the start of the pandemic. The BBC reports. The weekend’s increase brings the count of infected people to 813-412, the eighth highest in the world. The death toll has risen to 32,225 from 32,086 since Friday, Spain’s health minister reported.

In Russia you go towards the closure of Moscow schools and the Ulyanovsk and Sakhalin regions, where distance learning will change due to the increase in cases. The actual date of the transition to distance learning will be announced by the local authorities. In Moscow, schools have already been closed from today until at least October 18, extending the autumn school holidays which normally last a week. The cases of Covid-19 in the country continue to increase: in the last 24 hours they have been ascertained 10,888 new infections, the maximum since 12 May. In the capital alone, there are 3,537 new cases. I’m 117 deaths during the last day. Russian government statistics suggest that more than 45,000 people died for Coronavirus since the beginning of the pandemic, which is more than double the number estimated by the task force against Covid-19. The Moscow Times writes. According to the state statistical agency Rosstat, 45,763 people diagnosed with Covid-19 died between April and August in Russia. But the national task force, which collects the daily figures based on data reported by regional crisis centers, places the total number of deaths at 21,475. So less than half of Rosstat’s five-month total.

Read Also:  From a woman to an Olympic medalist... U.S. Capitol intruders revealed

Trump leaves hospital to greet fans: “I learned a lot”

Iran, record of infections and victims

Record of cases and victims in Iran. In the last 24 hours they have been recorded 3,902 contagions, the highest number since the start of the pandemic, and 235 deaths, a peak reached only on July 28th. Patients in intensive care amount to 4.167. Total infections rise to 475,674, deaths to 27,192.

Michael Ryan, Executive Director of the Health Emergency ProgramWorld Health Organization (WHO), during a special session of the executive board, said: “Our best estimates tell us that approx 10 percent of the world population“, which is more than 20 times more than what is diagnosed today,” could be infected. “WHO estimates, according to the Associated Press, would amount to 760 million cases based on a world population of 7.6 billion people .

“We have not been careful in choosing leaders” | THE UNIVERSAL

Pochettino is categorical, Mbapp has “the potential” to succeed Messi and CR7

In the midst of an epidemic, the government wants to relaunch the reform of unemployment insurance in January

Moroccan tourists allowed to come to Tunisia but…

He wanted to make a joke but shot his son’s friend dead: “I screwed up”

The hospital was given the “green light” for the new construction of the main building. What can you find in it?