After the Michigan shooting: Republicans provoked with a gun picture for Christmas 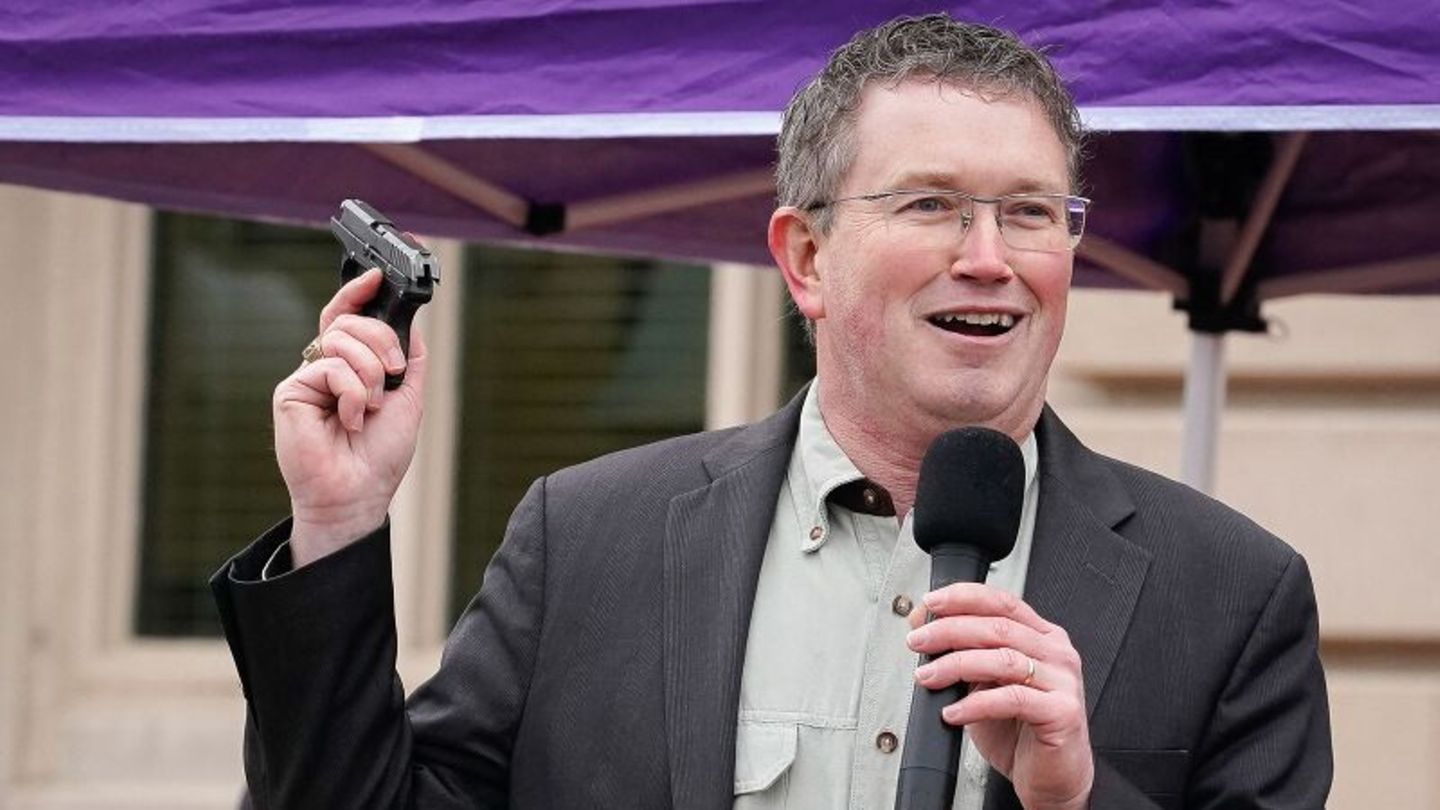 A Christmas greeting with guns – usually nothing special in the US. But just days after the shooting at a Michigan school, a photo of a Republican MP is causing a lot of trouble.

In the USA, a Republican politician caused great indignation with a Christmas greeting: Thomas Massie is posing in the photo with his family in front of a Christmas tree – everyone is holding a gun. The MP from the US state Kentucky wrote: “Merry Christmas. PS: Santa Claus, please bring ammunition.”

Due to your data protection settings, this content was not loaded in order to protect your privacy.

Here you can change the settings for the providers whose content you want to display. These providers may set cookies and collect information about your browser and other criteria determined by the respective provider. Further information can be found in the data protection information.

The news would hardly have been worth mentioning in the US had it not been for Massie posting the photo five days after a fatal shooting at a high school in Michigan: A 15-year-old had opened fire at his school in the small town of Oxford on Tuesday. He killed four classmates between the ages of 14 and 17 and injured seven other people. As it turned out later, the father had bought the gun for his son as a “Christmas present”. Both Democratic and Republican politicians were therefore stunned by Massie’s Christmas greeting.

Particularly sharp criticism came from Democratic MP John Yarmuth, who also represents Kentucky in the House of Representatives. “I promise not everyone in Kentucky is an insensitive asshole,” he wrote on Twitter. “I’m old enough to remember Republicans shouting that trying to protect people from gun violence after a tragedy like this was insensitive. Now they’re openly rubbing child murder under our noses when they would have scored a touchdown. A shame. “

Fred Guttenberg, whose daughter was killed in the Parkland school massacre in 2018, also spoke up: “Thomas Massie, if we’re already sharing family photos, here are mine,” he wrote on Twitter and published two photos: “One is the last photo I took of Jaime. The other shows the place where she is buried.”

Several Republicans also condemned the posting by their party colleague. Adam Kinzinger, a Republican congressman from Illinois, accused Massie of using the picture “Gun fetish” to flaunt. And Anthony Scaramucci, who was in the meantime communications director for US President Donald Trump, tweetedthat he will fund any potential candidates running against Massie in the next congressional election.

Parents of Sagittarius plead not guilty

The deadly school shooting in Oxford, Michigan is only the latest in a long line of gun violence cases that have sparked heated debates over school safety, gun control and rights. Although Massie does not refer directly to the act in his posting, it stands to reason that the declared gun friend posted the picture with reference to the current discussion about gun bans. In the said photo, the MP himself is holding a firearm that looks like an M60 machine gun. Such fully automatic weapons are only allowed in the US for the military, police or with a special license. However, there are rifles that are designed to look extra like a fully automatic machine gun, even though they are only semi-automatic.

In a rare move, Michigan prosecutors are also bringing manslaughter charges against the underage gunman’s parents. They are said to have ignored warnings and to be jointly responsible – the parents pleaded not guilty. James and Jennifer C. were just as “shocked” by the events as any other person, said one of their lawyers in court on Saturday. The judge in charge set the bail at US $ 500,000 each, previously the defense had suggested a maximum of US $ 100,000.

However, prosecutor Karen McDonald said that given the gravity of the allegations, the burden of proof and the risk of escape, bail should be set as high as possible. The son’s “terrible” act traumatized the whole community. “These two individuals could have prevented it,” said McDonald. “They should have known he was dangerous and they gave him a gun and didn’t put a safety on it.”