“You stole my bad life and threatened me with death” .. The Saudi doctor living in Morocco reveals new details on the case of the infidelity of his Moroccan wife 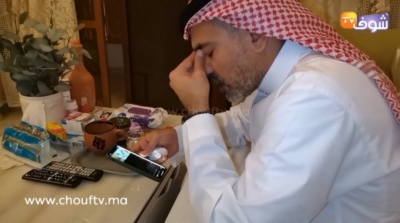 Al-Marsad newspaper: The Saudi citizen, residing in Morocco, betrayed by his Moroccan wife, revealed the details of the most difficult night of his life, which made him lose confidence in himself, especially because he obeyed her and asked for everything the weather.

I was asking her permission before going down to the cafe

And the Saudi citizen said, in an interview with the Moroccan channel “Shof TV”: “She ruined my whole life … I would ask her permission before going down to have a coffee … In the end, she stole the misery. of my life. ” On Morocco within five years, she transfers her money and puts it “cash” in the house, and only she knew the amount.

And the citizen added that his wife threatened to kill him and told him: “I will pay someone (500 dirhams) to kill you and all his threats are recorded verbally on the WhatsApp application, indicating that everyone in his region in Morocco knows who. is Dr. Wael, who married Mrs. “Z”, and that the Corona period was the reason for not obtaining official documents for her marriage and residence, who was exploited by his wife and family, who claimed it was a web of immoral acts.

He continued his speech, accusing his wife of being very jealous, and was jealous of his mother and her six children, crying for his ingratitude and forcing him not to communicate with his children, remembering the details of the last night in which she betrayed him after convincing him that she would go to Casablanca, Morocco, to see her sister, who was staying in France, and she with another man.

Talk to other men by name

The Saudi citizen said his wife’s sisters were using his social media platforms while he was with her at home, and they talked to other men on his behalf, and when he left she opened the camera to them for money: “He was working on two accounts and I found out.”