Who is Gilang the Sex Predator who is aroused with Pong Jong Cloth? 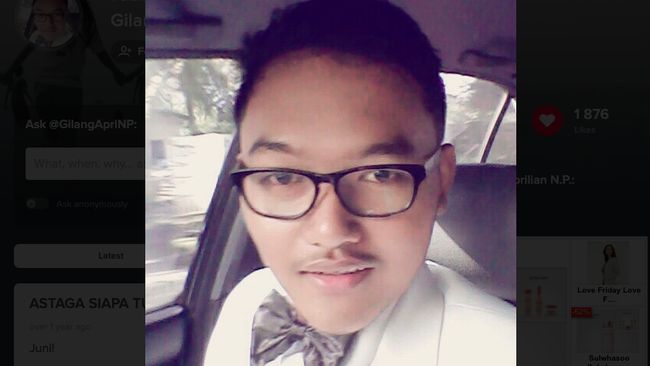 Name Gilang the middle of a busy netizen talk on social media because it has a distorted sexual behavior.

Based on speech Gilang victims on Twitter, the man who claimed to be a student at Airlangga University, Surabaya, East Java, was under the guise of completing scientific writing research.

Gilang asked the victims to wrap themselves in a pokong-like cloth and asked them to send photos and videos when the victim was wrapped up like pocong with jarik cloth.

Reportedly, these photos and videos were used by Gilang to fulfill sexual desire.

News about this case also enlivened the mass media. Now, information and data about Gilang are revealed through the information he wrote on the site AskFM.

On the page are 20 facts about Gilang which has a full name Muhammad Gilang Eizan Aprilian Nugraha Pratama Thoharie.

“Thoharie is a surname from the mother, but because of its length, it will be cut by Aprilian Nugraha Pratama Gilang,” write Gilang.

He also wrote very fond of One Piece and has 10 favorite figures from the manga series.

In addition, he claimed to have a hobby of traveling, his two favorite cities are Yogyakarta and Palangkaraya.

A number of evil figures in film Disney also became his favorite.

“Now, I like the evil characters in the universe DC and Marvel, especially Suicide Squad and the Brotherhood of Evil,” he wrote.