What do you need to know about the new measures to control Covid-19? – Latvia – News

It is allowed to gather up to 500 people indoors, but up to 1000 people outdoors.

It is currently stipulated that a maximum of 1000 people can stay indoors and up to 3,000 people outdoors at a place where events or business services are provided.

At the same time, after a long debate on Cancellation of the “Rimi Riga Marathon” It has been decided to include in the amendments an indication that from tomorrow until 31 December it will not be possible to organize outdoor events with more than 300 people and active movement of people, such as running, marathon.

The threshold for the self-isolation requirement after returning from abroad is planned to be further adjusted to Latvia’s current two-week cumulative morbidity rate per 100,000 inhabitants, Jurijs Perevoščikovs, Director of the Infectious Diseases Risk Analysis and Prevention Department of the Center for Disease Prevention and Control (SPKC), told the media on Friday.

According to the epidemiologist, on Thursday, October 8, this figure was 40.2 cases per 100,000 population.

A list of country cumulative indicators can be found at here.

From Monday, October 12, the police will have the right to stop the vehicle on an optional basis in order to check the fulfillment of the obligation to include information in the system. However, once the Covid-19 visitor control information system becomes operational, the State Police will not conduct special raids and will not actively stop private cars.

Until 6 November, the use of mouth and nose pads in public transport is mandatory, and for non-use it may not be allowed in or disembarked from transport.

There are two exceptions. Given that young children do not have the skills to use a face mask properly and that there is less risk of Covid-19 spreading among children, children under the age of 13 may not be able to use the screen. Also, if a passenger has an obvious movement disorder or mental health disorder, as a result of which the person lacks the ability or skills to use the mouth and nose mask, its use should not be required and the person should be allowed to stay in the vehicle, explained the Ministry of Health. 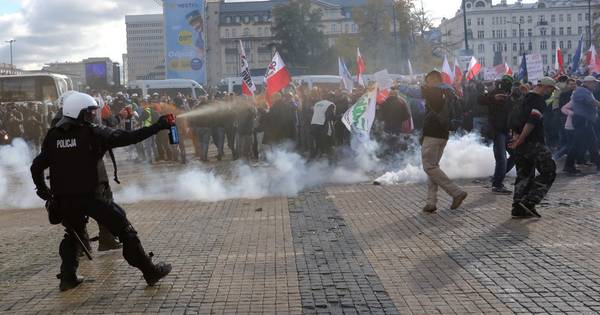 More than 120 arrests in Polish protests against abortion curtailment | Abroad

Real Madrid beat Barcelona in the Spanish championship for the second time in a row :: Football :: RBC

This is how they learned royal etiquette