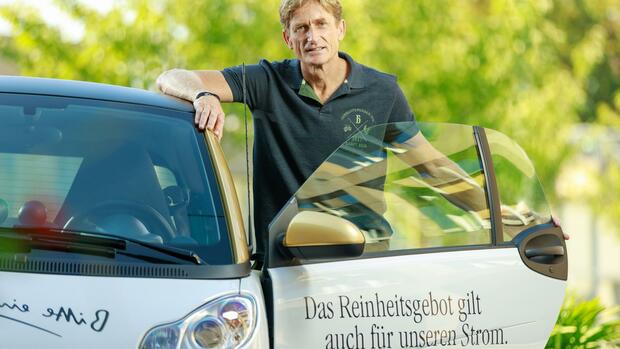 Düsseldorf Beer has been brewed in tranquil Bitburg for over 200 years. Bitburger is the number one draft beer brand in this country. The water, hops and brewing barley for the malt come mainly from the region. But climate change has meanwhile also affected the Eifel. “Extreme weather such as heavy rain and drought hit our brewing business hard. That is why the responsible use of raw materials and nature is more important than ever for us, ”says Jan Niewodniczanski, Managing Director Technology and Environment, from the seventh generation of the family company.

Most of the sealed hops for Bitburger premium beers were swept away by the terrible July flood. “18 of 22 hectares are a total loss,” says Bitburger supplier Andreas Dick, a hop farmer from Holsthum. Jan Niewodniczanski immediately agreed to support. Once a week, the two of them consider together how hop growing can withstand floods and drought in the future.

Which hedges and verges prevent flood damage? Which grass mixture is suitable as an intermediate plant? Dick does not want to give up the fertile growing area under any circumstances. “There is also a chance to now plant hop varieties that are resistant to heat,” says Dick. His hop farm had already been certified as sustainable in 2020 on the initiative of Bitburger.

The Bitburger Group, which also brews König Pilsener, Köstritzer and Licher, is a pioneer in the brewing industry when it comes to climate protection. All four locations have been producing in a climate-neutral manner since the end of 2020 – two years earlier than planned. The brewery has reduced its primary energy source CO2 emissions by 61.8 percent since 2008. “That is a very substantial saving,” says Axel Kölle, Director of the Center for Sustainable Corporate Management (ZNU) at the University of Witten / Herdecke. Bitburger is part of the “ZNU goes Zero” initiative, which advises companies on their way to climate neutrality.

In addition to the use of green electricity and photovoltaics, the CO2 reduction was achieved primarily through more efficient heat generation. Our own combined heat and power plants, which generate electricity with gas, are also used for this purpose. The waste heat is used to brew beer. “In this way we achieve an efficiency of almost 90 percent. That is much more efficient than centralized electricity production in coal-fired power plants, ”says brewing engineer Niewodniczanski.

Not everything is climate neutral

However, the combined heat and power plants are not climate-neutral because they use the fossil fuel natural gas. “Because of the high energy efficiency, we made a conscious decision to do so – and temporarily accept the resulting CO2 emissions.” These are offset by tree planting and other compensation projects.

Bitburger wants to convert its four-megawatt combined heat and power plant in Bitburg – the largest in the brewing industry – to almost climate-neutral biogas as soon as possible. Stadtwerke Trier are in the process of building a large regional route for biogas. The processing plant for biogas is located at the former Bitburg airfield. The brewery is hoping for a connection in three to four years.

The switch to block-type thermal power stations brought unexpected challenges. Bitburger needed machines that could handle the new temperature level. There is, for example, 98 degrees hot water instead of the previously 130 degrees hot water vapor. This applies to machines for bottle washing, for example, but also to other systems in the brewing process. “Machine builders often said that it wasn’t technically possible,” says Niewodniczanski. “If we urge them persistently enough, they’ll always find a creative solution.”

The entrepreneur also persisted in order to improve the bad climate balance of the König brewery in Duisburg-Beeck – and to finally get out of the climate-damaging coal there. As early as 2008, he suggested using the waste heat from the neighboring Thyssen-Krupp blast furnaces. This is only partially converted into electricity and most of it escapes as steam through the chimneys. “At the time, the project was not economically viable at all,” recalls Niewodniczanski.

In April 2022 it should now be ready. The waste heat from steel production comes from Thyssen-Krupp via a pipe over a few hundred meters directly to the König brewery and provides the thermal energy required to boil the wort in the brewhouse at 100 degrees. Overall, the brewery saves a good 8,000 tons of CO2 a year. The project pays off for both Bitburger and Thyssen-Krupp, emphasizes Niewodniczanski. The measure is also funded by the Federal Ministry for Economic Affairs and Energy.

“Such energetic partnerships are the future. The König Brewery is a prime example here, ”says Kevin Bär from Eon’s Energy Solutions division. He and his team developed the waste heat project in Duisburg. The Eon manager worked closely with Jan Niewodniczanski. One impression: “At Bitburger he is vehemently promoting the topic of sustainability. In doing so, he does not turn over every euro, but thinks long-term. “

Climate pioneers in the economy – all parts of the series

There is a lot of industrial waste heat in Germany, especially in metropolitan areas such as the Ruhr area. Eon estimates the waste heat potential of German industry at around 287 terawatt hours. This would generate around 23 terawatt hours of electricity, which would save ten million tons of CO2. “With the waste heat from industry in Germany, we could provide a fifth of the energy required for electromobility,” says Eon expert Bär. Deutsche Bahn would not even need half of the annual waste heat as electricity.

“The waste heat cannot and is not always used by the companies themselves. That is why it can make sense in many cases for a neighboring company to make use of the waste heat, ”says Bär. Bitburger has already done this in the past. There was a district heating pipe from the brewery to 1,000 households in the American barracks in Bitburg. “We were the first civil company to supply a US military base with energy,” said Niewodniczanski. “A win-win situation.”

In his youth, the entrepreneur played ice hockey on an ice rink just 200 meters away from the brewery. The took advantage of the cold generated there. “There have always been energy partnerships. Today the focus is more structured and is on reducing CO2. “
Bitburger uses the ideas of its 1,600 employees to reduce emissions.

They are rewarded with bonuses. These depend, among other things, on how much money the sustainable ideas save. There was a five-digit amount for suggestions as to how the brewhouse consumes less water. A virtual water price was set for this. Bitburger draws water from its own well. “Of course we try to minimize our water consumption, although we don’t have the cost pressure that we have with CO2,” says the managing director. A fee of 25 euros per ton has been due for CO2 since 2021. The price is expected to rise to 55 euros by 2025.

“It is not enough if the bosses drive electric cars”

The Bitburger Group has 16 trained sustainability managers at every location and every department from purchasing to marketing. “Only a few companies provide so many personnel for climate protection,” states Kölle from the ZNU. In Duisburg, for example, the brewery is buying a new packaging machine that processes less plastic. “The idea for the new machine did not come from technology, but from marketing,” says Niewodniczanski.

The 101 apprentices are important multipliers for sustainability. For several years they have been trained to become “sustainability ambassadors” and “energy scouts”. The trainees initiated about a compressed air week. It controls all valves in the brewery. The workforce was made aware of where compressed air can be saved. “All employees must be enthusiastic about sustainability. It is not enough for the bosses to drive electric cars, ”says the managing director, to whom the switch to e-mobility is particularly important. One of the company cars bears the label “The purity law also applies to our electricity”.

Bitburger started converting all forklift trucks to electricity six years ago. But at that time there were no heavy vehicles that could permanently load beer kegs and crates weighing four to five tons. “The German manufacturers were way behind,” said Niewodniczanski.

They only reacted to pressure from the industry. “If you oversleep the trend towards e-mobility, you will eventually become a Nokia company,” he warned the manufacturers. That made an impact.

E-forklifts are worthwhile thanks to CO2 pricing

The production of large electric forklifts is now paying off. Also because the political framework has changed as a result of CO2 pricing, for example. “In addition, technical developments will give us economic solutions that were unthinkable ten years ago,” Niewodniczanski is convinced. He hopes that under the new federal government there will be an end to the zigzag course and more planning security for companies in matters of sustainability.

“Our brewery has existed since 1817. It has survived many wars and crises. For me, climate change is the core challenge of the future. We are therefore doing everything we can to ensure that the eighth generation can still brew beer. “

Series – Climate Pioneers in Business: There is hardly a day on which a new company in the world does not declare its freshly set climate goals and ambitions for the energy transition. There are some who have long been ahead of the “green economy” trend and have been proving for many years that ecology and economy do not have to be a contradiction in terms. In our series we introduce a few of these “climate pioneers”.