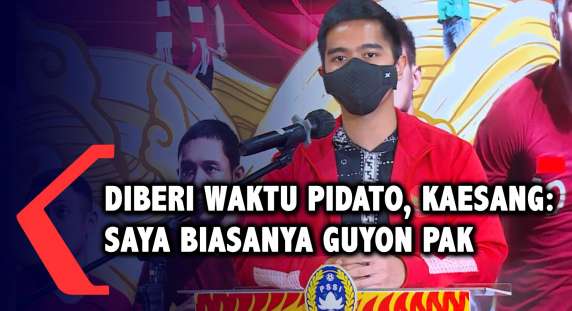 JAKARTA, KOMPAS.TV – The President Director of PT Persis Solo, Kaesang Pangarep, was invited to give a welcome speech when he visited the office of the Indonesian Football Association (PSSI) Jakarta, Wednesday (7/4/2021).

Kaesang thanked PSSI Chairman Mochamad Iriawan, for being given the opportunity to learn about the world of Indonesian football.

“First of all, I would like to thank the General Chairperson for accepting me at the office. Taking my time to learn about Indonesian football. I’m really lucky that he took his time for me,” said Kaesang.

Humbling, Kesang then continued by saying that it was his first time leading a football club.

He also aspires to build a football club that the people of Solo can be proud of.

“I am a new kid. I have only been leading a prehistoric club for one month. It has a long history since 1923. But thank God we are now building with new management so that we also want to make Solo people proud,” he said.

On the same occasion, Kaesang joked that he was not used to making speeches. He then said that he often joked or joked.

“I was surprised that I was asked to make a speech here, sir. I am not used to making speeches. I usually joke around, sir. I only saw that there was me in this rundown,” continued Kaesang.