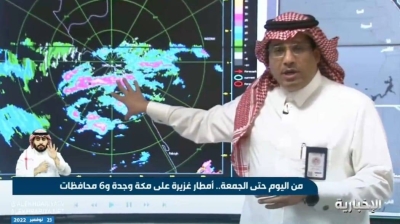 And he said, during statements on the “Al-Ikhbariya” channel: “The National Meteorological Center predicted the continuation of the meteorological conditions to which the airspace of the Kingdom is exposed, and we expect the presence of storm clouds during the night and tomorrow they will accumulate in some parts of the Medina region, including the coasts.

He continued: Clouds are now gathering over the shores of Yanbu, and the intensity of these clouds is expected until the early hours of the morning to increase, as well as over Makkah Al-Mukarramah.

He added, “The clouds will return again on Friday morning and we expect moderate to heavy rainfall over most of the western coast of the Kingdom and parts of the northern border region, Al-Jawf region and Hail.”

He pointed out that rain is expected in parts of Qassim region and northern and western parts of Riyadh region from Thursday to Saturday. Noting that this will be followed by a significant drop in temperature.