Warsaw. Arrest for an activist suspected of damaging an anti-abortion van 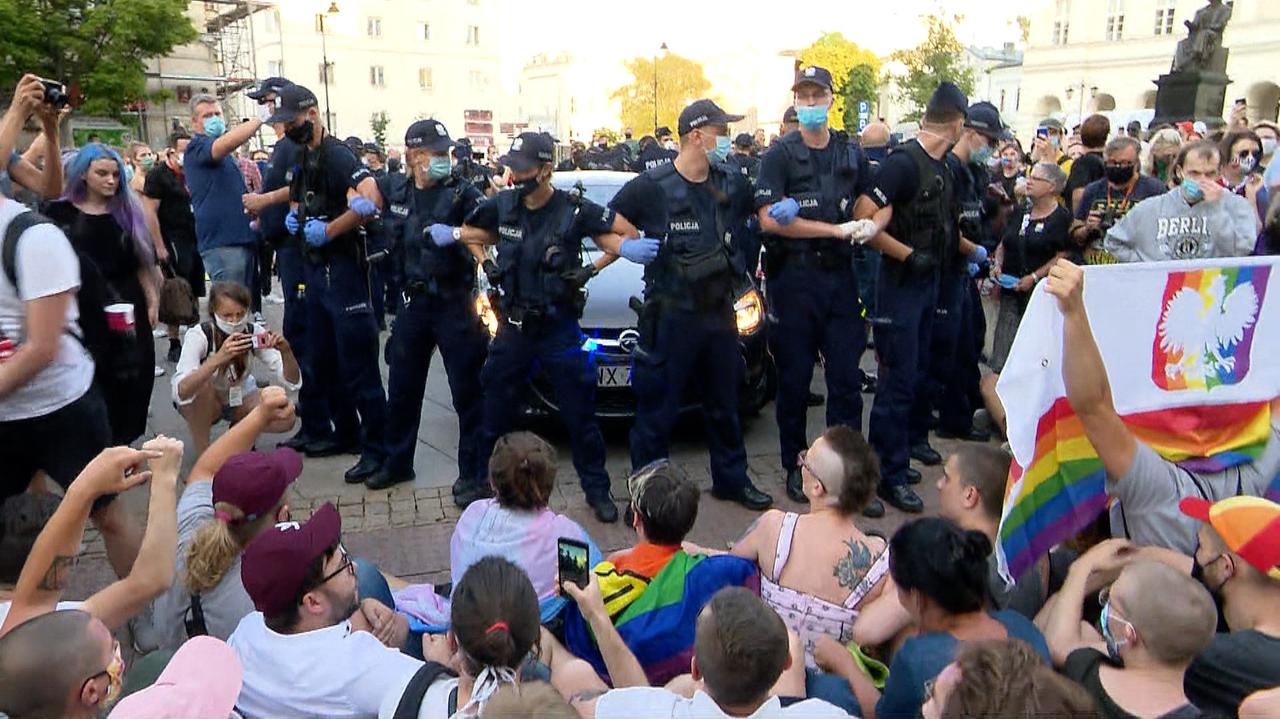 In Krakowskie Przedmieście, a protest is underway against the court’s decision to detain two months in prison for activist Margot from the Stop Bzdurom collective, who is suspected of damaging an anti-abortion van. “Margot was arrested, made no resistance, is now in a civilian police car.” The car was surrounded by demonstrators and blocked its departure – Paweł Łukasik describes TVN24 reporter.

– The court ordered the detention of this person for a period of two months. However, this is not about hanging flags on monuments, but about damaging an anti-abortion van. The court changed the preventive measure due to a complaint submitted by the prosecutor’s office, informs the spokeswoman of the District Prosecutor’s Office in Warsaw, Aleksandra Skrzyniarz.

The complaint was heard by the District Court in Warsaw. We tried to ask the Court why it changed its earlier decision in the Margot case, but his spokeswoman is on vacation and is not answering the phone.

“They announce defense of Margot”

Due to the court’s decision, dozens of young people against the arrest of the activist gathered in front of the Campaign Against Homophobia. – The police have not yet announced when and how the arrest will take place. Several dozen people gathered here, there are also politicians from the Left. The demonstrators announce the defense of Margot – described TVN24 reporter Paweł Łukasik.

Then the protest moved to Krakowskie Przedmieście near the statue of Christ.

At around 7.20 p.m. Maciej Gdula, a deputy from Spring, informed about the arrest of the activist. “Margot arrested and placed in the car, activists block the car,” he wrote on Twitter.

The information about the detention is confirmed by a TVN24 reporter. “Margot was arrested, made no resistance, is now in a civilian police car.” Demonstrators surrounded the car and blocked its departure – reports Łukasik and points out that although the demonstrators are making a lot of noise, the protest is quite calm. – They sit in the street, pounding drums, chanting various slogans, but they are not aggressive – he says.

Activists also sat on the pavement at the monument to Nicolaus Copernicus and on the road. The vehicle surrounded a police cordon. There are several police cars on the spot, Sylwester Marczak, spokesman of the Warsaw Police Headquarters, spoke about the situation.

– We are dealing with a situation in which the court issued a decision related to the application of a preventive measure in the form of temporary arrest for a period of two months, which is related to the act of, inter alia, forcing a specific behavior or causing minor health damage and the offense of property damage. Among other things, on the basis of this, the court granted the prosecutor’s request and applied the arrest – explained Sylwester Marczak. He also noted that this has nothing to do with acts of insulting the statue of Christ and offending religious feelings.

In mid-July, according to the court’s decision, Margot was under police supervision and a bail in the amount of seven thousand zlotys. Earlier, the activist was arrested by the police. She was accused of “jointly and in agreement with others, she damaged a Renault Master car by cutting the tires, tarpaulin, tearing off the mirror, tearing off the license plate, damaging the rear view camera and staining the vehicle with paint” on 27 June. As the prosecutor informed then, the total value of the losses amounted to over six thousand zlotys to the detriment of the “Pro-Law to Life” Foundation.

The activist was also accused of having knocked Łukasz K. onto the pavement during the incident, causing him injuries in the area of ​​his back and left wrist. “The allegation also includes the use of violence consisting in jerking and pushing Łukasz K. in order to force the aggrieved party to stop recording the course of the event” – the prosecutor’s office informed.

“There is a closure for a few months for fighting the Pro-Prawo do Życia foundation. A foundation that could not function in the whole normal world,” Margot commented on Friday’s court decision. In her opinion, arrest in such a situation is unnecessary. “The prosecution boasted that it had the strongest evidence in the case and there was no reason to have any doubts, so this measure of supervision, which is the closure, is purely repressive” – ​​she assessed.

In front of the KPH headquarters, Hanna Gil-Piątek, an MP from the Left, told the Polish Press Agency that during one of the arrests, Margot was “treated very brutally”. “We found her as MPs thanks to the intervention of the commander-in-chief after many hours,” she said. She also recalled that the activist was recently detained again, this time due to rainbow flags being planted on several monuments in the capital. “The two months in detention that we have against Margot today in the court’s decision are simply an excess measure,” she said.

5 Facts You Need to Know About Immunity