Vaccination against COVID-19: these are the days with the highest and lowest influx of Ecuadorians | Ecuador | News 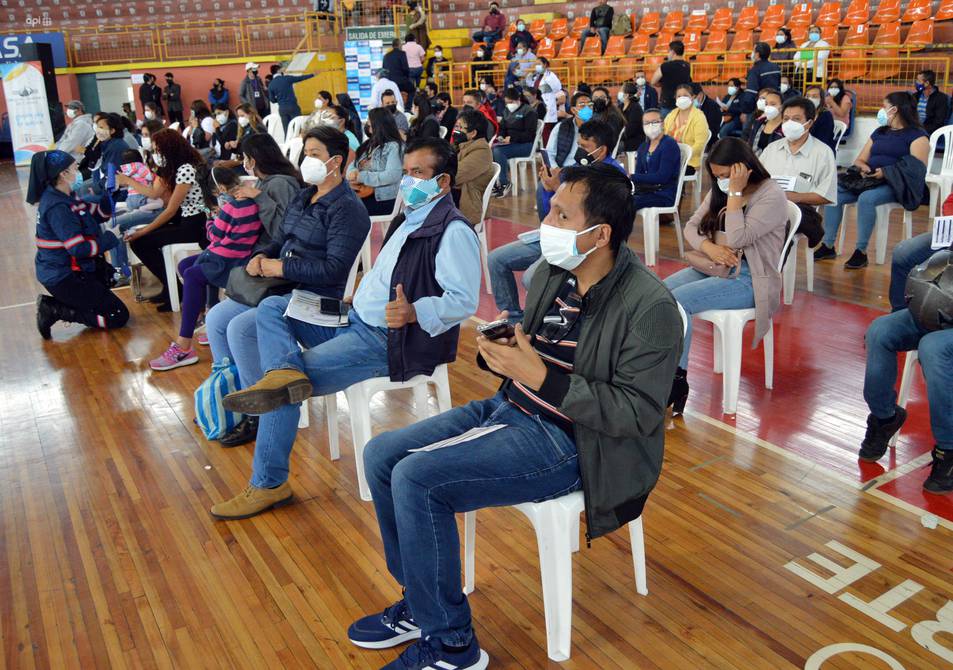 Know the days when there are fewer people in the vaccination centers.

Since the beginning of Vaccination Plan 9/100, on Monday, May 31, a smaller influx of citizens to inoculate themselves against the COVID-19 on weekends, mainly on Sundays, days in which up to a third of the number of immunized people on an ordinary day has reached a maximum, despite the fact that on Saturdays and Sundays all the people (laggards) who They could not attend between Monday and Friday only of the current week, as announced by the Ministry of Public Health (MSP).

While Wednesdays, Thursdays and Fridays in each of the last four weeks have been the days with the highest application of total doses, with 287,443, 333,900 and 317,952, respectively.

Today marks four weeks of the plan that plans to vaccinate 9 million people in 100 days, that is, until September 7, and according to the report of the vaccinometer administered by the MSP, until Friday 25 they had been applied 2′643.327 first doses and 1′300.929 second doses, including those that were left in the government of Lenín Moreno (1′536.255 of the first and 540.835 of the second dose, according to provisional figures that are still adjusted, as can be seen in the vaccinometer presented each day).

Days with more and less vaccinated

There are days of the week when vaccination within the Plan 9/100 It could be considered very welcoming or an influx of people to the various inoculation centers and others in which they are not.

In the first case, of a lot of influx or a possible minor absenteeism, there are the days Wednesday, Thursday and Friday, with averages of between 71,861 and 83,475 people who manage to get vaccinated per day; while in the remaining four days of each week, the amount of immunized low in some cases, such as days sundays, until reaching only a third of the highest daily figure of that week; this is the It him Sunday average within the 9/100 Plan has not yet exceeded the 27,288 vaccinatedAlthough there are some cities in which fewer inoculation centers operate on Sundays than on other days of the week.

In some vaccination centers in Guayaquil there was very little attendance on Sunday, June 20.

At the Mucho Lote esplanade in Guayaquil, the number of attendees to get vaccinated increased on Monday, June 21.

There was regular attendance at the vaccination center located at the Almirante Illingworth Naval Academy in Guayaquil on Tuesday, June 22.

Dozens of people attended the San José La Salle school coliseum in Guayaquil to get vaccinated on Wednesday, June 23.

On Thursday, June 24, attendance increased to get vaccinated, as happened at the Higher Institute of the Provincial Council of Pichincha in Quito.

On Friday, June 25, attendance dropped in some vaccination centers in Guayaquil.

The other two Sundays with low figures since the beginning of Plan 9/100 were the June 6th, with 29.895 dose and the June 13th, with 36.262. It should be noted that for the days sundays the group that can be vaccinated with first dose is that of the laggards or people who within the current week could not attend in a timely manner and those who should receive the second dose of any of the three pharmaceutical companies, which have been previously summoned and which appear in the schedule.

????Those who did not attend their assigned appointment from Monday 21 to Saturday 26

???? People with an appointment assigned in ➡️ https://t.co/GJYVu1JYQD

Do not forget your identity card.

In the case of people who have a disability greater than 50% or who suffer from aggravating illnesses The schedule established for the next few weeks by the MSP is as follows:

For this week and particularly for this Sunday, the people who had to attend to receive the second dose were that of this schedule:

In the government of Lenín Moreno, within the Get vaccinated plan, the Sunday that more vaccinations were applied was the may 23, with 87.174 doses (79,634 of the first and 7,540 of the second), according to the vaccine meter, although on the Sundays prior to that date the same thing happened as now, a possible low attendance and few doses applied, with a maximum of people vaccinated that came to 38.742 (38,180 of the first and 562 doses of the second) on Sunday May 2.

Another day with the lowest attendance to be vaccinated at the national level is the Saturday, with a average of 47,489 people, which, however, represents just a little more than half of those who are going to be immunized on ordinary days. It should be remembered that for the days Saturdays are summoned, for the application of the first dose, people of a certain age and with a specific ending in their identification number (in this case the odd digit), in addition to those who are lagging behind the current week, both from the regular schedule by age, and those who have an aggravating disease that are within the age range previously established for that week that they have not been able to attend in a timely manner. And for the second dose It is called on Saturdays, according to the type of vaccine and according to the date when the first immunization was applied.

????Who did not attend their assigned appointment from Monday 21 to Friday 25

???? People with an appointment assigned in ➡️ https://t.co/GJYVu1JYQD

Do not forget your identity card and the assigned appointment. pic.twitter.com/fB3S2c3Arm

Every week the vaccination attendance has gone from less to more on ordinary days. Starting the Monday with a average Diary of 58.937 dose; the Tuesday, from 60.420; the Wednesday, from 71.861; the Thursday, from 83.475; and the Friday something starts to go down, with 79.488, having as we mentioned the Saturdays and Sundays Like the ones of less influx to immunization.