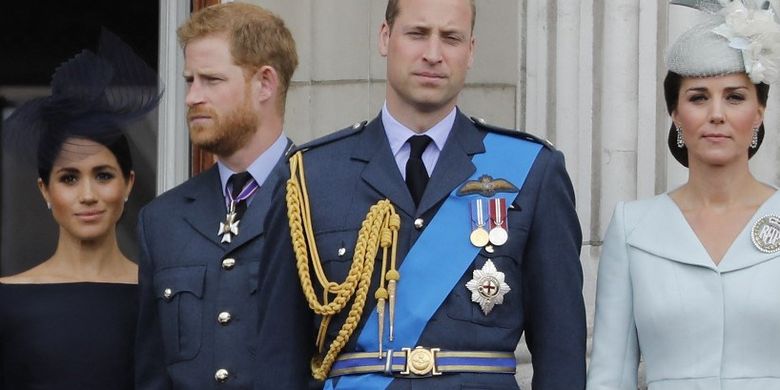 LONDON, KOMPAS.com – Prince William and Harry will walk behind their grandfather’s coffin, while attending Prince Philip’s funeral next week.

The two brothers, who have barely spoken in the two years following this series of conflicts, will walk side by side ahead of the memorial at Windsor Castle.

Prince Harry (36 years) is scheduled to fly back to England Sunday morning (10/4/2021). For the first time, he will reunite with his family since moving to the US last year.

Also read: Take a peek at the love story of Prince Philip and Queen Elizabeth II that sprouted from adolescents

It is thought that Harry and William haven’t seen each other in person since fall 2019.

Government sources say Duke of Edinburgh saddened by their rift, and urged them to put their differences aside for the Queen.

Meghan, who is in late pregnancy, has not been given permission to fly and will stay at home in Montecito, California, with her son Archie.

This means that Harry has to face his family alone after the two’s shocking interview with Oprah Winfrey. In the interview, the duchess accused a senior aristocrat of racial issues.

Harry also claims his brother and father are “trapped” within the Monarchy. Including telling openly about his rift with William.

Also read: Prince Philip’s body will be transferred again, this is the reason

Evening Standard reported on Sunday (11/4/2021) the Duke of Edinburgh became a consolation for the princes when their mother Princess Diana died.

At that time, the two, who were only a dozen years old, were reportedly terrified to walk behind their mother’s coffin at her funeral.

But Prince Philip responsibly told them: “I will walk if you walk”.

Several years later, Harry said he was grateful he was part of the procession, and for his grandfather’s guidance.

Duke son Duchess of Sussex posted a tribute to Prince Philip on their foundation’s website Archewell on Friday (9/4/2021).

It reads simply: “In memory of His Royal Highness the Duke of Edinburgh 1921-2021. Thank you for your service… You will be missed very much. ”

The Duke of Edinburgh died on Friday morning at Windsor Castle just weeks after being discharged from hospital after a month-long treatment.

His funeral will take place next Saturday and will be attended by 30 members of the Royal Family.