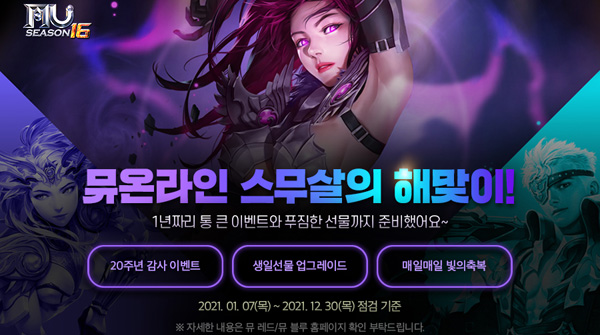 Webzen announced on the 7th that it will hold a large-scale event in celebration of the 20th anniversary of the PC Online MMORPG Mu Online.

‘MUNIVERSE the Beginning’, the 20th anniversary thank-you event for Mu Online, will be held for about a year from the 7th to December 30th. Characters over level 400 can participate, perform missions that change every month, and acquire various buffs according to the increasing’event level’. The reward buff is applied differently for each’event level’ section, and 5% of experience can be obtained as a reward when reaching level 0-2 as of January. If you achieve a certain level here, you can get items including'(Excellent) Blood Angel Weapon x1′.

In addition to this, Webzen celebrates the 20th anniversary of Mu Online by holding a’birthday gift upgrade event’ and an event inviting new and returning members. For more information on the game MU Online Official WebsiteYou can check it in.