Trump refused to testify in New York for hours 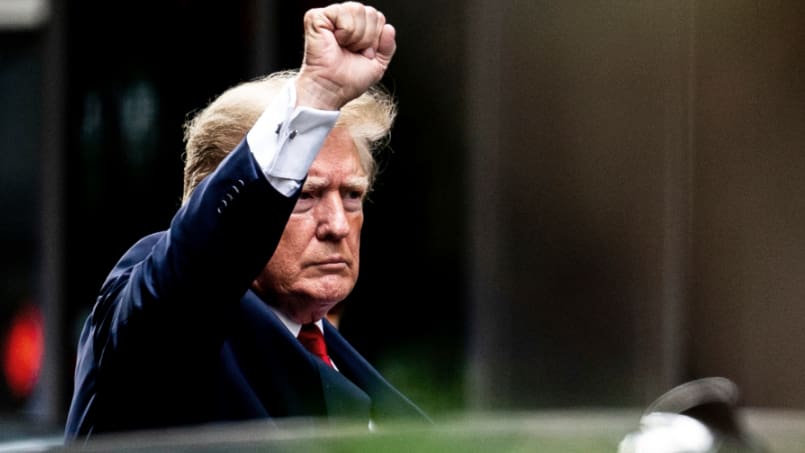 Former US President Donald Trump (76) repeatedly refused to testify for hours when questioned under oath by New York Attorney General Letitia James (63). “I’m just leaving the Attorney General’s office – a very professional meeting,” Trump wrote on Wednesday on the social network Truth Social, which he co-founded. The “New York Times”, citing Trump’s lawyer Ronald Fischetti, wrote that the ex-president had only answered one question for four hours – namely his name.

The newspaper reported that Trump issued a statement for the record in which he called the investigation into his business practices a continuation of “the largest witch hunt in our country’s history.” He accused James of having openly advertised “a policy of destroying my person” during the election campaign. Trump then exercised his constitutional right to refuse to answer if he could incriminate himself. After the survey began, he always responded with the words “same answer”.

The New York Times wrote that the meeting lasted from 9:30 a.m. to around 3 p.m. (local time) with breaks. The actual questioning lasted about four hours with some interruptions. Democrat James has been leading civil investigations into Republican Trump’s corporate empire for years. According to James, Trump and the Trump Organization are said to have increased or decreased their finances as needed, for example to get easier access to loans or to pay less taxes. Trump’s company rejects this.

Trump wrote on Wednesday that he has “a fantastic company with great assets, very little debt and lots of cash. Only in America!” The New York interrogation came two days after an FBI search of his Mar-a-Lago, Florida home on a separate matter. The process is considered unprecedented in US history. The background was apparently Trump’s handling of documents from his tenure. At the beginning of the year, it became known that the National Archives, which is responsible for storing presidential correspondence, suspected several boxes containing confidential material, among other things, in Mar-a-Lago. Trump finally handed over several documents to the authority in January.

New details on the FBI raid

After that, there was another exchange between investigators and Trump’s lawyers, it said. The officials finally suspected that Trump or his team were still holding back important documents, the Washington Post wrote, citing anonymous sources. The FBI is said to have taken twelve boxes during the search. Trump was not at his home during the search.

Trump wrote on Truth Social on Wednesday that his staff installed an extra lock on the location where the boxes were stored in early June at the request of the Justice Department and the FBI. “Then on Monday, without notice or warning, an army of agents broke into Mar-a-Lago, went to the same storage area and ripped open the lock they had asked to be put in place. One surprise attack, politics, and meanwhile our country goes to hell!”

According to a Fox News report, Donald Trump was the last member of the family to be questioned in the New York civil trial. His children Ivanka (40) and Don Jr. (44) have already testified. After the death of Ivana Trump († 73), his first wife, the statements planned in July were postponed under the oath of the ex-president and their two children.

Trump was allowed to refuse to testify on the matter if he was incriminating himself. Son Eric (38), who had to testify under oath in the matter in 2020, exercised this right several hundred times during his questioning. However, such a step could be construed as disadvantageous in a possible process. Donald Trump is the founder of the Trump Organization, his two sons Donald Trump Jr. and Eric Trump are vice presidents of the company conglomerate, which is primarily active in the real estate sector. (SDA/kes)