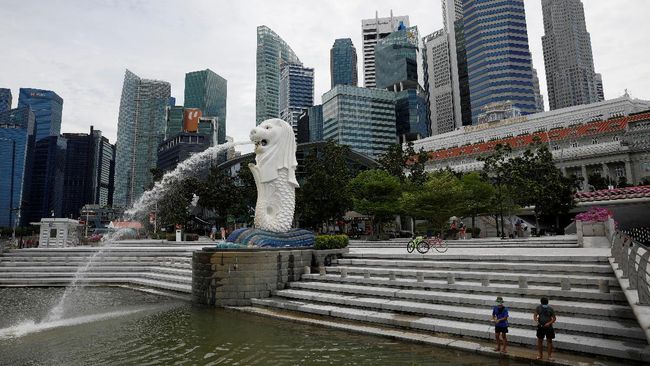 Jakarta, CNBC Indonesia – Cases of the disease caused by the corona virus (Covid-19) in Singapore are at an all-time high, but the government will open international borders for tourists, even without the need to quarantine.

In trading on Tuesday (12/10) at 12:27 WIB, SG$ 1 was equivalent to Rp 10,480.72, the Singapore dollar was stagnant compared to the closing position at the beginning of last week. The Merlion’s currency is near its lowest level since November last year.

Yesterday, the Singapore government reported that the number of Covid-19 cases had increased by 2,263, a far cry from the pandemic high of 3,703 recorded last Sunday. Although it has decreased considerably, the addition of cases in Singapore is still fluctuating, so there is a risk of going up again.

At a time when the Covid-19 case was at its highest, the Singapore government continued to take the policy of opening entrances without quarantine. The entrance, called the vaccinated travel lane (VTL), has so far been reserved for foreign tourists from eight countries. VTL is expected to start next Tuesday (19/10).

That way later travelers can travel freely without having to quarantine. But they have to be vaccinated.

Reported from CNBC International, VTL itself was announced in detail by the Singapore Ministry of Transport. The new VTL line will apply to Canada, Denmark, France, Italy, the Netherlands, Spain, the UK and the United States (US).

“All eight countries are already open to tourists from Singapore. So VTL will restore quarantine -free two -way travel between Singapore and them,” said Communications Minister S Iswaran.

Meanwhile, Indonesia will also open international borders. Bali will be opened to foreign tourists starting October 14. But tourists must go through a 5-day quarantine period, which is certainly a consideration for foreign tourists to travel within the country.

Nyoman Astama as a Member of the Advisory Council of the Association of Hospitality Leaders Indonesia (AHLI) told CNBC Indonesia that the government had indeed reduced the quarantine period from 8 days to 5 days, but it felt like it was still lacking.

“This procedure has not attracted foreign tourists to visit if they have to change hotels from the quarantine hotel to the hotel they want. EXPERT hopes that the quarantine period can be shortened again to 2-3 days,” said Astama.

Based on the direction of President Joko Widodo (Jokowi), the government will conduct a simulation before fully opening a tourist area on the Island of the Gods.

In the afternoon meeting, he conveyed that maximum preparation and simulation should be carried out before opening,” said Coordinating Minister for Maritime Affairs and Investment Luhut Binsar Pandjaitan, quoted Tuesday (12/10/2021).

Luhut said the government would soon release a list of citizens from 18 countries who were allowed to enter Indonesia. This will be stated in the Ministry of Home Affairs Circular. Kristen Stewart and Dakota Johnson, chic at the Gotham Awards