The reversed “Konquista” – world tour of the Zapatistas: inside in the summer of 2021 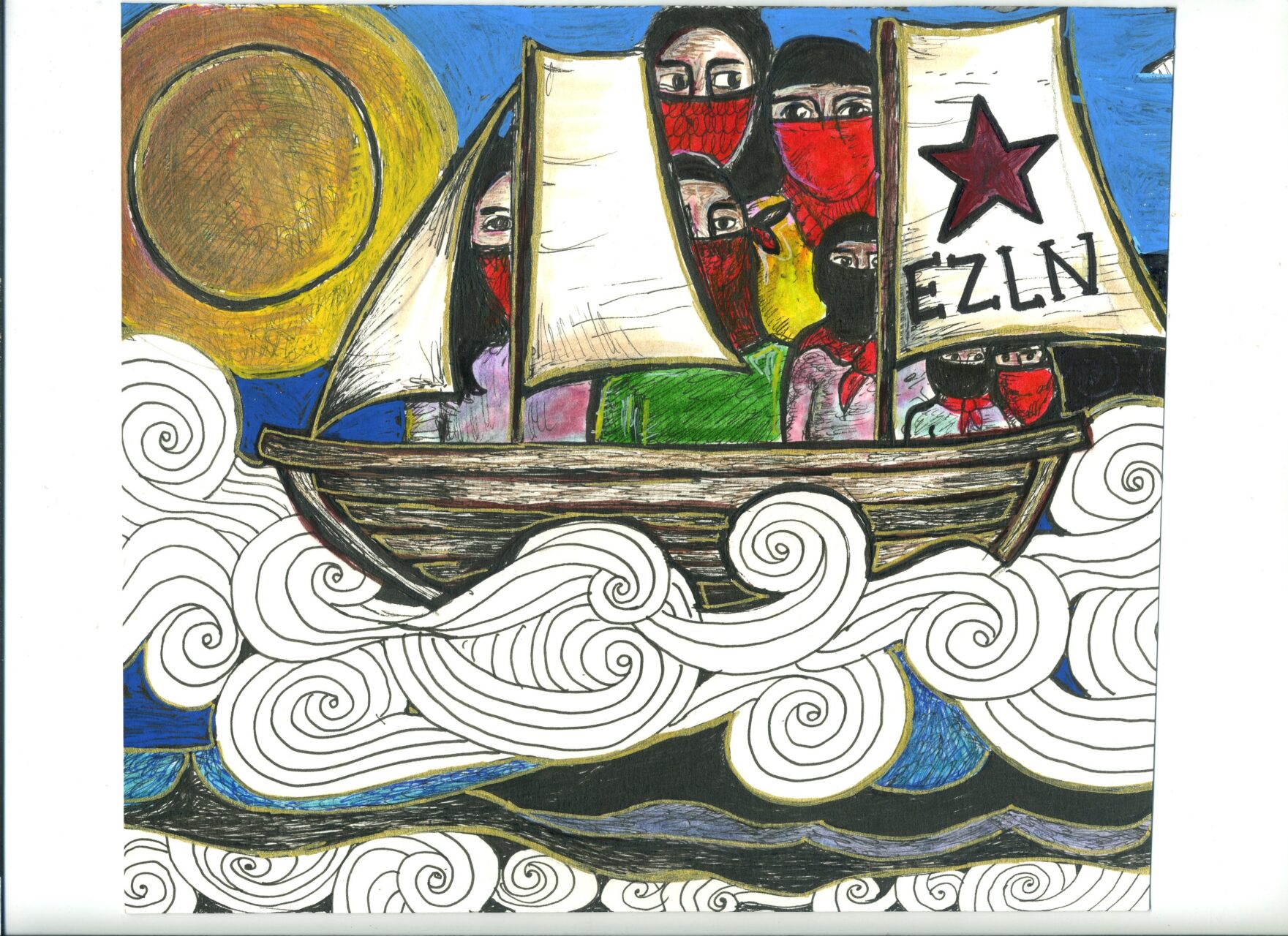 The announcement by the Zapatistas (an insurgent group of indigenous Maya from Mexico) that they are going on a world tour and will be present in Madrid on August 13 for the 500th anniversary of the conquest of Tenochtitlán sounds like a reversal of the conquest of the American continent by the Spanish crown.

Or should it be the legendary imitation of the journey of the king and demigod Quezalcoatl, cast out from ancient Teohuacán, who found his Mayan counterpart in Kukulkan? He set sail in the Yucatán for Europe and prophesied that he would come back one day. Is that what historians declare as a “repetition of history”, now in the opposite direction, or is this a perforation of the content of conquest and invasion? Is there something that interrupts the eternal repetition of violence and counterviolence, that is a repetition, but with the opposite sign?

On August 13, 1521, a unit of a few hundred Spanish conquistadors conquered the capital of the Aztec Empire, Tenochtitlán, today’s Mexico City. The legend of the return of the Quetzalcoatl, which was confused with the white conquerors, certainly favored the conquest of the American high cultures, but it was made easier by the help of the indigenous peoples oppressed by the Aztecs. It was from Tenochtitlán that the conquistadors continued to conquer all of America, causing one of the greatest genocides of all time in Mexico. Over 22.5 million people in what is now Mexico’s territory died as a result of wars of conquest, introduced diseases, starvation, forced labor, punitive expeditions and the disruption of their communities and cultures.

Not only was it one of the greatest genocides, but also one of the greatest forays in history. The capitalist development of Europe would not have been possible without America’s gold and treasures, part of the original accumulation. The Aztec gold still shines from the altars of churches and the roofs and domes of castles across Europe. The price was the immeasurable suffering and misery of the original American peoples. On the basis of the forcible conquest, locked in an extremely unequal and dependent development, the indigenous peoples, the real masters of the American earth, remained the lowest in the social hierarchy of American societies to this day.

Because of their ability to remember and their sense of resistance, the indigenous communities survived on every corner of the continent. Again and again there were and are uprisings and resistance, silent and loud, which oppose the colonial and post-colonial system. There have been and still are some positive results, such as protection laws or integration regimes for indigenous people. But ultimately these are wiped out by racism, social inequality and xenophobia and lead to paternalism and assimilation with even more oppression. In the neoliberal development phase, the misery of the original peoples and their resistance increased many times over. The zapatistas uprising in 1994 in Chiapas, one of the poorest and most underdeveloped states in Mexico, was directed against neo-colonialism and neoliberalism. They named themselves after a leader of the 1910 revolution, Emiliano Zapata, who proclaimed the slogan “Land and Freedom”. On the day the North American Free Trade Agreement between Mexico, Canada and the USA came into force, which saw the indigenous peoples in Chiapas particularly threatened, they rose up against the Mexican government and began to take their lives into their own hands. The “Ya Basta!” (Enough!), The battle cry of the uprising, should mark the beginning of the end of the exploitation of the indigenous peoples and other socially oppressed people. A new culture of resistance was born, consisting of a mixture of protest and the establishment of its own autonomous spaces with an anti-capitalist and grassroots social organization.

After years of trying to transform Mexican society towards grassroots democracy, the inclusive moment of which should be greater than the exclusive, the Zapatistas failed because of the resistance of the rulers and the rotten social system in Mexico, which is characterized by the murder of thousands of people, the cruel murders of women (femicides), the lost “war on drugs”, through corruption and fraud. After the failed transformation project, the Zapatistas built an alternative, autonomous space inside, which is characterized by grassroots democracy, collective property, gender and natural justice and diversity. Their armament is predominantly symbolic and contributes to self-defense against violations of their autonomy by paramilitary groups and attacks by the military. In the Zapatista areas, a community emerges in which all residents are actively involved in the decisions and actions of the community.

From the beginning, the Zapatistas were not only related to themselves, but also internationally interwoven with other resistances and protest groups. Their motto: “locally organized, globally networked”. Within a very short time, through the exchange of ideas, solidarity campaigns, digital networking and joint meetings in Chiapas, a world community of Zapatistas without fixed geographical borders was created. The protest movements of the last 20 years, such as counter summits against the G-20 or “Reclaim the Streets”, took over Zapatista forms of grassroots organization and peaceful forms of protest. The Zapatistas, in turn, invited activists from all over the world to international meetings in Chiapas. This began with the “Intergalactic Meeting against Neoliberalism” in 1996 in the Lacandon jungle and continued with numerous international meetings of women, indigenous peoples, human rights activists, scientists and artists. The sympathizers came to Chiapas from all over the world or participated digitally from other locations. The thought that the Zapatistas could go out into the world themselves has long been a seemingly utopian wish. And now this wish comes true!

The 500th anniversary of the conquest of Tenochtitlán was the symbolic date for the Zapatistas to take a trip around the world, to hold up a mirror to the post-colonial world and to make it clear that “they (the conquistadors) have not conquered us. That we are still there and continue resistance and rebellion. ”(1) They direct their message“ to the honest people who resist in every nook and cranny of the planet ”. As a goal they name: “We will sail to tell the planet that there is room for everyone (todas, todos, todaos) in the world that we feel in our collective heart. Quite simply because this world is only possible if we all (todas, todos, todaos) fight together to raise it up. ”In a communiqué, the EZLN and supporters from Europe expressed the expectation of creating common resistance, to expression:

“That we make the pains of the earth our own: the violence against women, the persecution and contempt of those who differ in their affective, emotional and sexual identity, the annihilation of childhood, the genocide of the original, indigenous peoples, militarism, the exploitation, the destruction of nature. “(2)

The Zapatistas call their journey after the Maya deity “The Journey of the Ixchel” in order to make the connection between opposites and the birth of new life understandable. (3) The Zapatistas associate the symbolic power of this deity with the destination of their journey, as Subcomandante Galeano made clear:

“A Mayan legend tells that Ixchel spread over the world in the form of a rainbow. This was done in order to teach the planet a lesson in plurality and inclusion, and to remind it that the color of the earth is not one but many, and that all, without ceasing to be what they are, together make the miracle experience of enlightened life. And she, Ixchel, the rainbow woman, embraces all colors and makes them part of her. “(4)

The world tour began with the symbolic erection of a ship in the Zapatista community of Morelos, which the Zapatistas called the “seedbed” inside, which indicates the visionary nature of the journey. The first group of Zapatista travelers went into quarantine on this imaginary ship. This “vanguard” with the name “Escuadrón 421” (Squadron 421) refers to the Zapatista principles of gender equality and diversity. The group consists of four women, two men and one transsexual. On May 1, they set sail with a seamanship consisting mainly of Germans on the ship “La Montaña” (the mountain) on Isla de Mujeres in Yucatán. They will land on the European coast in Vigo, Galicia, around mid-June. Little by little, more groups of Zapatistas will come to Europe by plane, where they will stay from July to October 2021. Later other Zapatista groups continue the world tour and visit Asia, Africa, Oceania and America.

Meetings with activists from the five continents are planned to discuss the world endangered by environmental degradation and the growing danger of war, as well as possible solutions for building an “other world” and to find common points in the struggle. The Zapatista delegation traveling to Europe consists of the nationwide National Indigenous Congress and the Indigenous Government Council, the “Popular Front for the Defense of Water and Earth in Morelos, Puebla and Tlaxcala” and the EZLN (Zapatista Army of National Liberation ). The first stop on the Zapatistas’ long journey is Europe. In all countries of the continent, various social groups and organizations are preparing for their arrival, planning joint events and an extensive exchange of experiences. The aim of the trip is not conquest and violence, but exchange and community, which is exactly the opposite of the historical reference to the conquest. And there are not Quetzalcoatl or Kukulkan, who embody the male power element of the old high cultures, their reference figures, but Ixchel, the wise woman. It connects and creates new life.

A lot of money is needed for travel expenses and logistics. Donation accounts:

The article was published by ila – the Latin America magazine 446, June 2021 on page 47 under the title “The reversed“ Conquista ”. The world tour of the Zapatistas in the summer of 2021 ″.

(1) http://enlacezapatista.ezln.org.mx/2020/10/08/sechster-teil-ein-berg-auf-hoher-see/
(2) http://enlacezapatista.ezln.org.mx/2021/01/01/gemeinsame-erklarung-eines-teils-des- europe-from-below-and-the-ezln /
(3) Ix Chel is worshiped with the attributes of the moon and fertility goddess, but also the earth goddess, patroness of water, the rainbow, pregnant women and inventor of the art of weaving. It is the connecting and newly creating element. The Isla de Mujeres on Cosumel is dedicated to this goddess and is the departure point of the Zapatista vanguard.
(4) https://radiozapatista.org/?p=37302 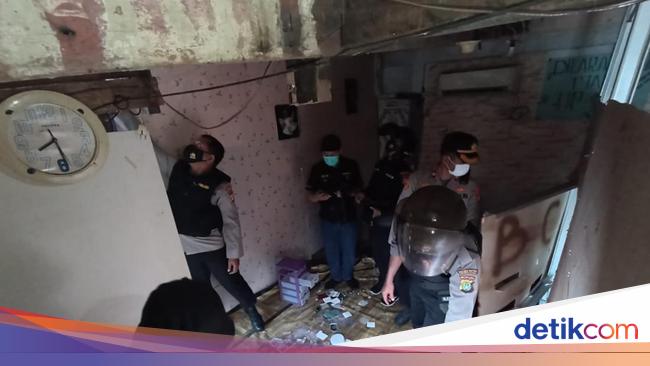 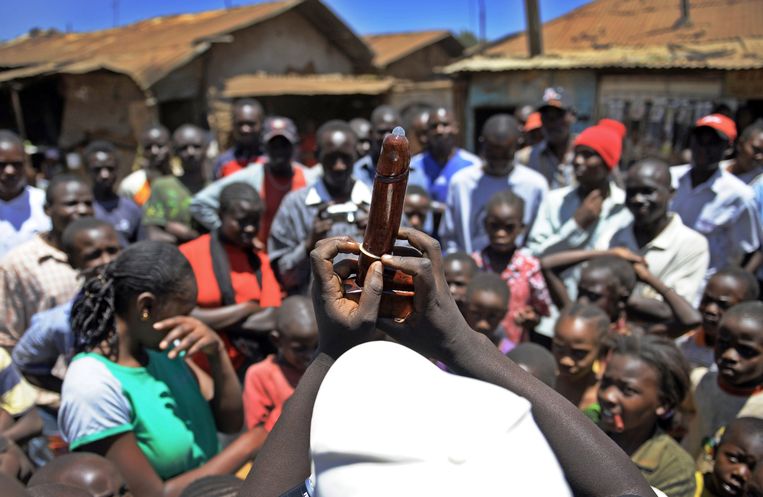 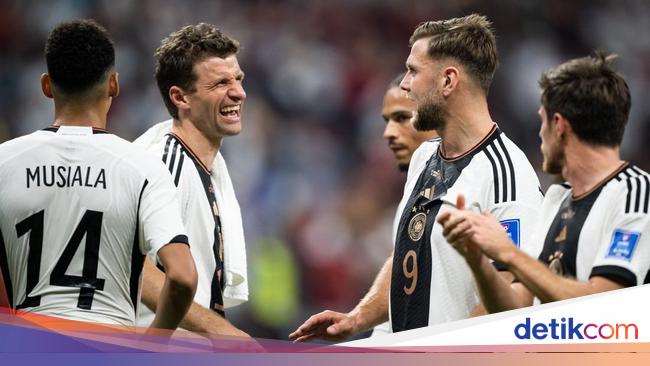 Fantasy lovers, get excited! The desperate fight against the Magisterium never ends

Fantasy lovers, get excited! The desperate fight against the Magisterium never ends