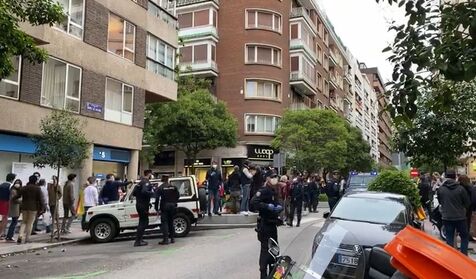 The protests against the government of Pedro Sánchez for its management of the health crisis that has caused coronavirus have been repeated again this Thursday in the streets of the Madrid center. For the fifth day in a row, citizens have gone out again carrying flags of Spain, rattling their saucepans and wearing some T-shirts on which messages could be read demanding the resignation of the tenant from La Moncloa.

The strong police device that the Government Delegation in Madrid had sent to the protest areas, which the socialist directs José Manuel Franco, has avoided the repetition of the crowds that had been seen in previous days, since the citizens have shown their discomfort by staying on the move at all times, wearing masks of all kinds and trying to maintain as much as possible the interpersonal safety distance.

The agents of the National Police They have used the loudspeakers they have installed in their vans to send a clear message to the public: “the royal decree of the state of alarm does not allow concentrations, they must keep moving on public roads and respect the safety distanceAnd with these indications, the vast majority of the protesters have complied.

The main core of these protests has once again become the street Núñez de Balboa, between Ramón de la Cruz and Ayala streets, in the well-known Neighborhood of salamanca, where precisely the most important police device was located and where the vast majority of the media have attended. In fact, shortly before 9:00 p.m., there were more journalists than citizens. The only incident in this area has been the identification of two citizens.

The protests have also taken place in other areas of the capital. According to reports Europa Press, there have also been such acts of rejection of the policies of the Sánchez Government in neighborhoods such as Chamartín, Mirasierra, Montecarmelo and Aravaca. There was also another act of censorship of the Executive summoned in Las Rozas, at the Camilo José Cela roundabout, between Heron City and Las Rozas Village.