The oldest steelmaker Hrňa has to fight for a job. I enjoy it, he admits

“Again, we want to play at the top and create the best possible position for the playoffs. And fight for the highest possible position in it, “said 32-year-old forward Erik Hrňa a few days before the first sharp match, who is the longest-serving hockey player in the Třinec Steelworks team after the departure of experienced fighters Krajíček, Adamský and Polanský.

How has the team changed since last season?

It got very young. There are new young boys here who are very handy and fit right into the cabin. Let’s hope that it will work for them as it did for them now in friendly matches and in the Generali Czech Cup. Let’s hope they pull it further into the season.

Three boys (Zadina, Jašek and Kořenář) came from overseas for two months’ help. What is the benefit for the team?

They can gain experience with us. It’s only good for them that they can play and don’t just have to wait for the season to start. And it’s great for us too, because we can see how he trains in America. They add, give each other the exercises they have from overseas, so we can look at it and improve too.

You have won the Generali Czech Cup, are you on your way to the highest goals?

Of course, we would like to play on top again and make a good position in the playoffs. Then anything can happen, but of course we will want to fight for the top positions.

Do you believe that the season will end?

I hope so. It will probably be wild, but I wish it were, because the sport is enjoyed by a lot of people and it would be a shame if people didn’t have anything to look at. Even if they can’t go to the stadium, at least on TV. 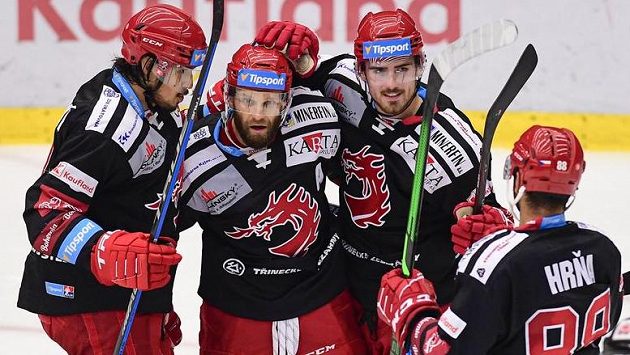 The vice-president of the club, Jan Czudek, stated that he wanted as much as possible in the stadium. Also from an economic point of view. What do you think about it?

It’s good, it just has to hit us and it’s only a matter of time before almost everyone will get through it. This could silence it. But we will see how it will be or when it will be.

How do you feel about being the oldest in office?

Just a pension in a minute, right? No, it’s nice to play in one place for so long, it’s a little lucky. Now I have a family, it’s great when you can be at home, you don’t have to move with it and look for new kindergartens and schools again. I really appreciate that and I hope to stay here for another year. But it will depend on me and my performance.

Are you fighting for a place in the lineup, you are often in the position of the thirteenth striker, do you have to work harder with the coming years?

It’s about the gym and chasing the physique, but I’ve just enjoyed it for the last few years. I enjoy working on myself, giving extra. I’m not the youngest, I still have to try to be at least on the same level, if not better than the young boys.

You start in Brno, they stopped the last two preparatory matches. Can it play a role?

I don’t know how many players were infected or if they had any at all. On the contrary, they may be more relaxed. I think if they go for it, they will be ready and so will we.

Do you have a stricter regime due to the occurrence of the corona in the partner Frýdek-Místek?

Of course, too. Plus other things, like some going somewhere after dinner you better avoid. Even social events of all kinds, so that there is no unnecessary chaos here and we do not have a postponed season.

1. FC Köln brimming with self-confidence: “A lot is still possible”

Champions League: How Thomas Tuchel once persuaded Julian Nagelsmann to pursue a career as a coach

Selecta will cut a third of its workforce