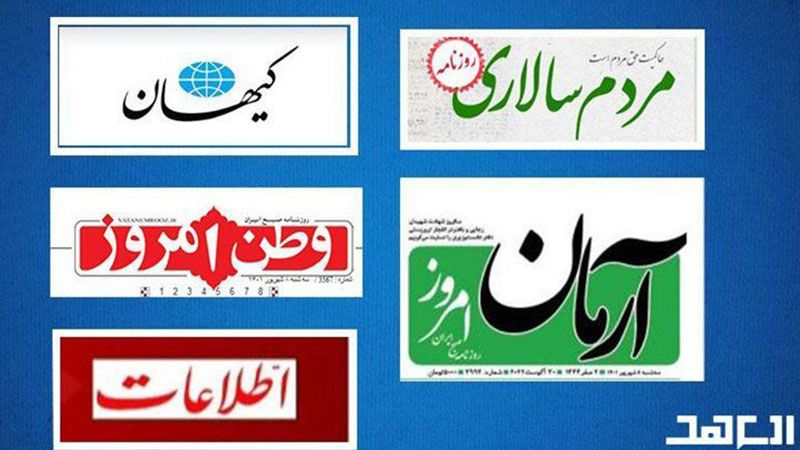 Today, Iranian newspapers ranked first on news of Iranian President Ibrahim Raisi’s trip to New York. The newspaper “Etilatat” quoted the president as saying that participation in the UN General Assembly was an opportunity to express Iran’s views and positions, and confirmed that there would be no meetings with US officials during this five-day trip.

According to the news agency of the Islamic Republic of Iran, Raisi stated before his departure for New York in the wing of the Mehrabad airport that this flight will take place at the invitation of the United Nations Secretary-General to attend the 77th session of the General of the United Nations Assembly, which is sacred to the Islamic Republic.

As for the newspaper “Kayhan”, he reported that the President of the Republic will meet and speak with some heads of state participating in this meeting and will also hold other side meetings.

For its part, the newspaper “Arman Melli” stressed that the president’s trip to New York to attend the United Nations General Assembly is a desirable trip from the point of view of public diplomacy, because the president can use the Nations platform. Unite General Assembly to announce the positions of Tehran, and announce some points relating to various issues, including the nuclear dossier.

It is considered, “Arman Melli”, that the efforts made on the sidelines of the General Assembly meetings may invite the heads of other countries to come to Tehran.

He added: “The visit of the Iranian presidents to New York will not be in vain, as Westerners are currently trying to isolate Iran due to the dispute with Tehran over the nuclear dossier and, of course, the absence of an Iranian-American meeting. presidents push some countries to try to prevent media coverage of the Iranian president’s speech every year. ” Western media are trying to show that Iran has a problem with some countries of the world by exploiting this problem. For this reason, they are trying to marginalize the basis of public diplomacy on the Iranian agenda at the United Nations.

As for the newspaper “Mardam Salari”, it presented, in an article, the history of the visits of Iranian presidents to the United Nations, where it stated that the presence of Iranian presidents at the United Nations General Assembly was one of their annual programs in the last two decades, the most important of which was Mr. Mohammad Khatami’s trip to New York and the question of the “dialogue of civilizations”.

He said that in the final years of President Hassan Rouhani’s presidency, the spread of the Crown put an end to these trips, despite former US President Donald Trump’s reckless decision to withdraw from the Joint Comprehensive Plan of Action, as he did not c ‘was more room for negotiations.

And he continued: “Now, that Corona’s restrictions are over, my boss is embarking on his first trip to New York and, as the country’s top executive, is trying to solve the knot in the way of revive the Joint Comprehensive Action Plan “.

In a related context, the speech on nuclear negotiations has also formed a prominent headline in Iranian newspapers, as it is linked to the president’s visit to New York, where the newspaper “Arman Melli” touched on Raisi’s statements in a interview with Western media, in which he stated that Iran cannot trust Washington without obtaining the Guarantee from the United States, regarding the agreement to revive the Joint Comprehensive Plan of Action.

And he added, citing Ibrahim Raisi in an interview with CBS about the Vienna talks, saying that “if we have a good and fair deal, we will be serious about reaching an agreement, and this agreement must be stable and guarantees must be provided, if these guarantees exist, then no America can withdraw from it. “

Regarding Iran’s withdrawal from the deal, he said: “The Americans violated the deal, and this happened unilaterally, and they said we left the deal, so their promises don’t make sense.”

In turn, the “Mardam Salari” newspaper pointed out that the head of the Iranian negotiating team, Ali Bagheri, also accompanies the president on this trip, indicating that Iran views this trip as an opportunity for negotiation.

The newspaper highlighted what was written about the Iranian president’s visit to New York to attend the annual meeting of the United Nations General Assembly, on his page on “Twitter”, the adviser of the Iranian negotiating team to the negotiations in Vienna, Muhammad Marandi, where he felt that “Dio Bagheri, the main Iranian nuclear negotiator, is with the president”. It would be a good opportunity for the European Troika to urge the US to resolve the few remaining issues in a meaningful way. “

“Arman Melli” quoted Iranian Foreign Ministry spokesman Nasser Kanaani in this context as saying that we will not have any dialogue with US officials during this trip and the president has clearly expressed Iran’s views on the matter.

In turn, “Kayhan” quoted the head of the Energy Organization, Muhammad Eslami, saying that the story told by Zionists and Westerners about the Iranian nuclear program and the accusations they are making against our nuclear industry has been going on for 20 years. . He added: “Twenty years ago, a movement against our country’s nuclear industry by the hypocrites led by the Zionists was thwarted by international organizations such as the Security Council and the International Atomic Energy Agency, which at the eventually led to the imposition of severe sanctions against Iran. “

As for the “Iranian newspaper”, he translated the entire interview with the Iranian president through the CBC channel and what was said on the subject of the negotiations, and indicated that Raisi believed that the violation of the agreement was due to the withdrawal of the Americans from the Plan. joint global action and Europeans’ failure to meet their obligations to the Iranian nation, but the Islamic Republic of Iran has fulfilled its obligations, according to the International Atomic Energy Agency.

In a question about the manufacture of a nuclear bomb, he added that the Islamic Republic has repeatedly stated that there is no nuclear weapon in its defense doctrine, but uses the nuclear industry today in the fields of medicine, agriculture, oil and gas and many other fields, and this peaceful use is a right of the Iranian people.

He concluded: “We have said many times that we are serious about negotiations to reach a good and fair deal and follow up on the lifting of sanctions, and this claim (Iran’s reluctance to return to the JCPOA) is one of the baseless allegations.”

Read more in: The Gulf and the world