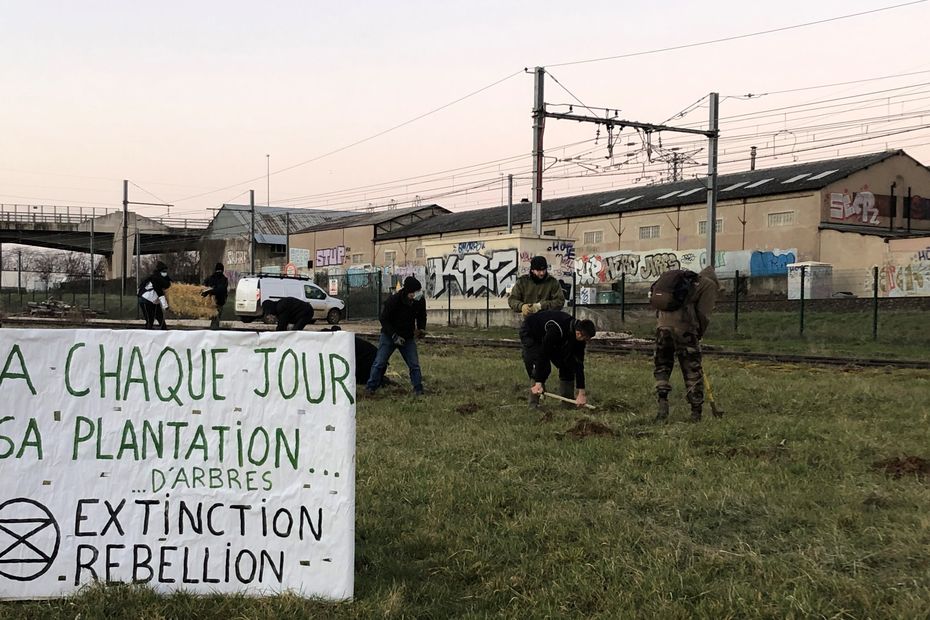 At dawn, this Sunday, February 28, 2021, around thirty young people from the Extinction Rebellion movement planted 200 trees in Dijon. A reforestation movement initiated a year ago to attract the attention of public authorities and improve carbon neutrality.

A ray of the full moon lights up the rue de Mainz in Dijon, where about thirty young people, mostly students, are activated : they plant two hundred shrubs, only local melliferous and fruit species. Here, will soon grow hazelnuts, wild pear trees and sixteen other species from an associative nursery.

Léo has just joined the Extinction rebellion movement which is leading the action:

We plant a whole hedge in this rather gloomy place to promote biodiversity and then turn it into a kind of forest core which in a few years will bring in a whole bunch of birds, insects and trees.

“It will be much nicer” concludes the young man.

The Extinction Rebellion movement is carrying out this action discreetly because it is illegal.

Yet its purpose is laudable : participate in the afforestation of public space, the re-greening of cities, including in industrial zones. This grassy area, near the ring road, was chosen because the land is unused. The presence of trees, close to the railroad, main roads and businesses, would help restore a little more carbon neutrality.

These secret plantations began in March 2020. It was the Plantation Rébellion association that launched the movement. to challenge the municipality of Dijon and the agglomeration. She is now joined by many students and by the Extinction Rebellion movement.

Read Also:  The driver stopped before the red light, but then drove off unexpectedly quickly

On this subject, the editorial staff recommends

In fact, the relationship between the association and the municipality is strained. Several plantations carried out were destroyed. Some are now left in place.

The last major action had taken place for the transition to the new year. The activists had reforested three sectors of Dijon: avenue de Stalingrad along the cycle path, a recreation area located rue Emile Poillot and near Lake Kir, with 200 shrubs.

On this subject, the editorial staff recommends