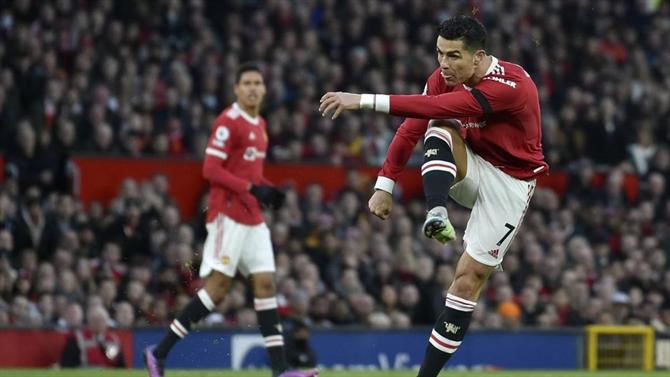 Cristiano Ronaldo is among the 10 candidates for the best goal of the year. The first goal he scored in the hat-trick that guaranteed the 3-2 victory over Tottenham, on matchday 29, was chosen and is up for voting on the Premier League website.

In that game on March 12, Manchester United returned to winning ways after the draw with Watford and the rout (1-4) suffered in the derby against Manchester City. At Old Trafford, Ralf Rangnick’s team received and beat Tottenham 3-2, with Cristiano Ronaldo in the spotlight.

The return of CR7, absent (and with great controversy) from the derby at the Etihad, began to be brightened up very early in the match: just in the 12th minute, the Portuguese international found space in midfield and fired a ‘bomb’ to the back of Hugo Lloris’s nets, making it 1-0.

That same performance also earns him the nomination for the ‘gamechanger’ award, which can be translated as a decisive performance, being nominated alongside teammate Pogba, goalkeeper Ramsale (Arsenal), Bergwijn (Totenham), and Bruyne and Gundogan of Manchester City.

Stepping up in the moments that matter ??

Vote for your pick of this season’s #GameChangers ?? https://t.co/AGiNzN5tJc pic.twitter.com/QQJ8LYxL4y