Test of the new Kia Sorento – what has changed in the large crossover? – test drive, Kia Sorento review The Russian market for Kia is among the priority ones (it’s not for nothing that the Koreans have been holding the lead among foreign car brands for 7 years), so we don’t have to wait long for new items. In February 2020, photos of the fourth generation Kia Sorento were shown for the first time – and now, after 8 months I am holding the steering wheel of a large crossover, the production of which has already been launched at the Kaliningrad Avtotor.

Do you remember how you looked former Kia Sorento (we sold it with the prefix Prime in the title)? The exterior of that car was so neutral that it was really difficult to reproduce it in detail. Newbie – much brutal and brighter! Embossed bonnet, wide and angular radiator grille, visually executed as a single element with LED headlights. The Sorento is also good in profile, where the chrome fin after the tailgate stands out. 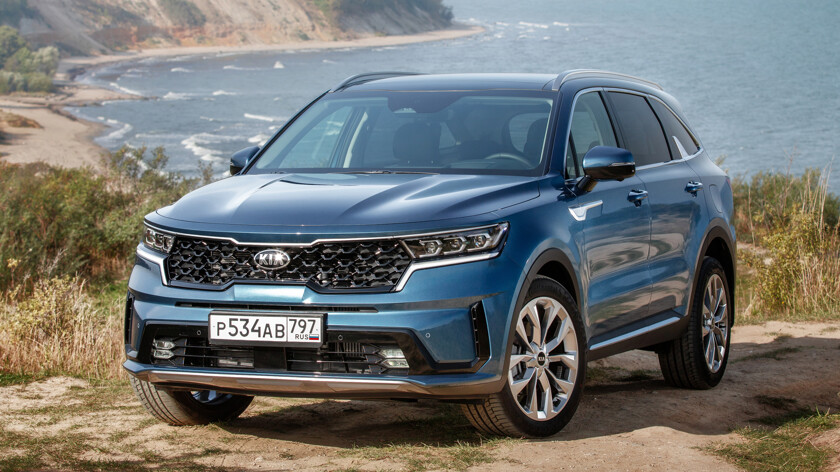 Behind, all the attention is on the twin vertical lights. This decision seemed controversial to many, but it echoes the design of the huge Kia Telluride crossover – by the way, it will not be brought to Russia, unlike the related Hyundai Palisade. The reason is that the Telluride is only produced in the USA and is equipped exclusively with a 3.8 liter V6 petrol. And in our country the lion’s share of such cars is sold with diesel engines. 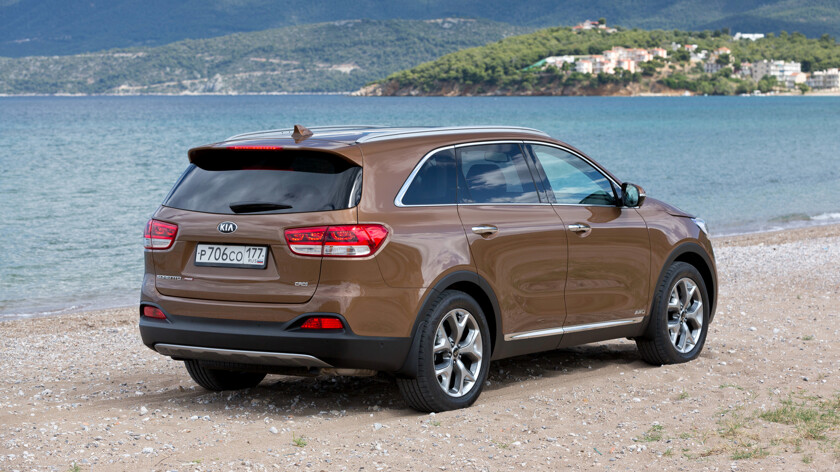 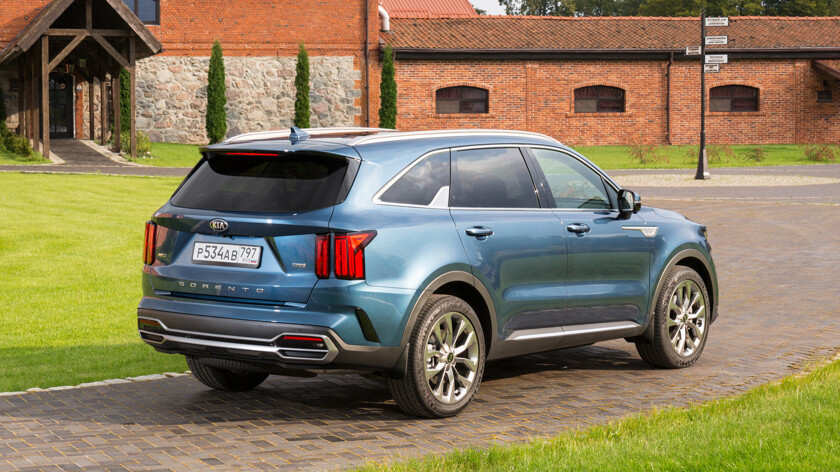 So in Russia, Mohave will remain the flagship among SUVs (its updated version will go on sale by the end of 2020), and the Sorento has slightly increased with the generational change – in all three dimensions it has added 10 mm each, but the wheelbase has become 35 mm larger. Accordingly, the front and rear overhangs have decreased – this has improved not only the proportions of the body, but also the geometric cross-country ability. 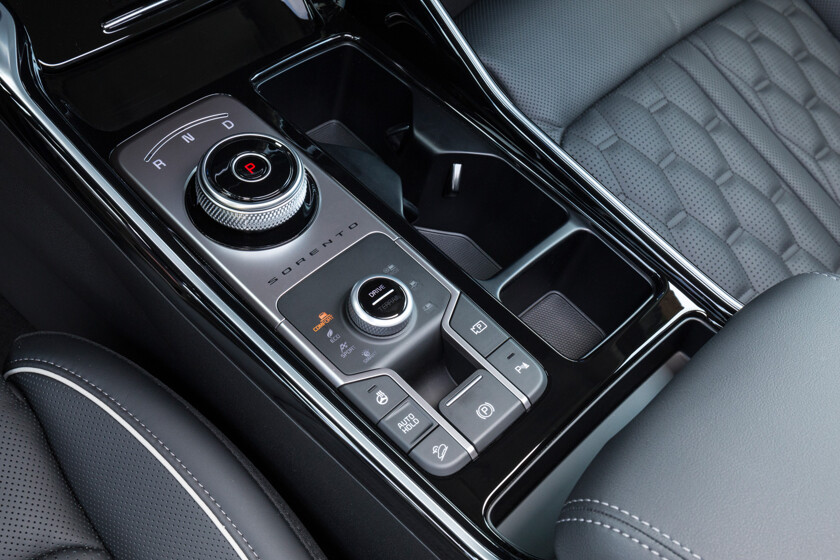 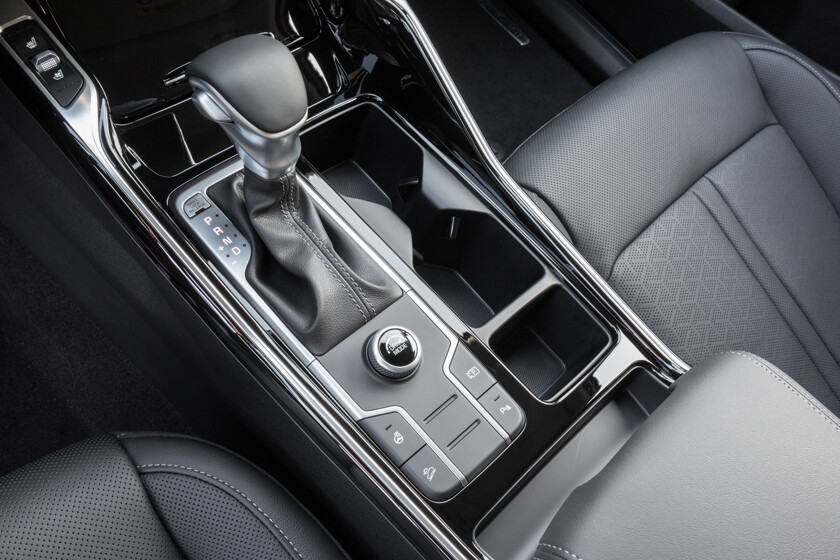 Diesel cars (left) have a washer instead of the usual gear lever, and the drive mode switch is supplemented with off-road algorithms

The Sorento no longer has a forced blocking of the interaxle clutch, but cars with diesel engines received a Terrain Mode switch, where you can select one of three algorithms: Mud (mud), Snow (snow) and Sand (sand). And why all this with a modest 176 mm ground clearance?

The number of power units has decreased

When the generations changed, the Sorento lost a 3.5-liter gasoline V6 (it accounted for 15% of sales), and the four-cylinder 2.5 from the SmartStream family became the base engine. It produces 180 hp. and 232 N ∙ m, which, of course, is not enough for a large and heavy crossover. Yes, in the city there are quite enough dynamics – up to a hundred all-wheel drive versions accelerate in 10.3 seconds (front-wheel drive – in 10.1). But it’s better not to dream of fast overtaking on two-lane roads.

So, as before, the basic gasoline engine is addressed to calm drivers. If he is not constantly forced to feats with the right pedal, then he works quietly, the 8-speed automatic transmission shifts smoothly. There is one more “bonus” – the cylinder head has already been improved. The first to receive this motor in Russia Hyundai sonata, and she managed to note the increased oil consumption. 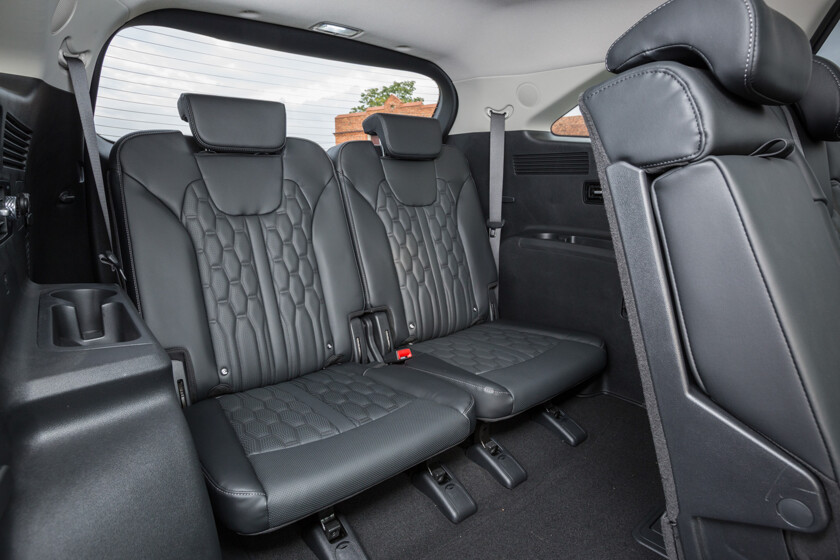 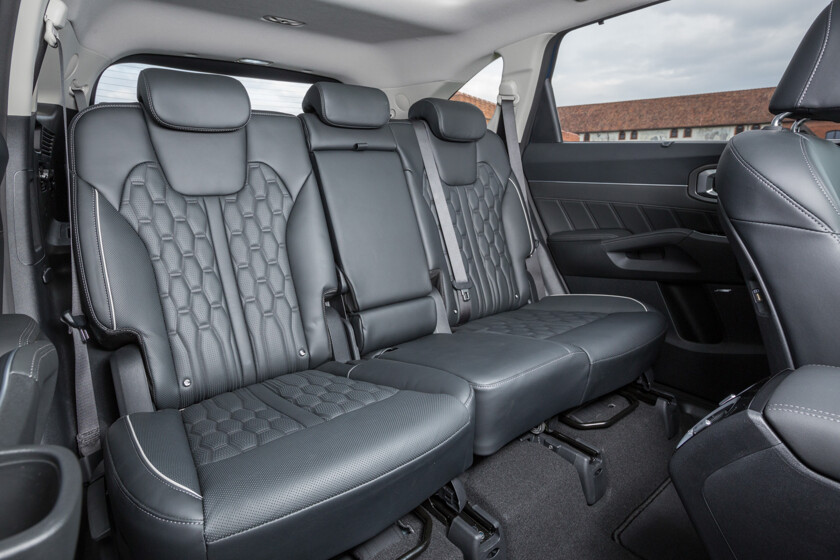 The second row of the Sorento has plenty of room, the sofa has a longitudinal adjustment, and there are cool cup holders on top of the door panels. It is quite convenient to make your way to the third row, and in expensive trim levels there is a separate air conditioner unit

Unsurprisingly, 60% of the Sorento Prime was sold with diesel engines. The all-new 2.2-liter engine delivers 199 hp. and an impressive 440 N ∙ m of torque. This is a completely different matter! And quickly overtake and accelerate sharply in city traffic is not a problem. I only wish it worked quieter – it rumbles too much outside. 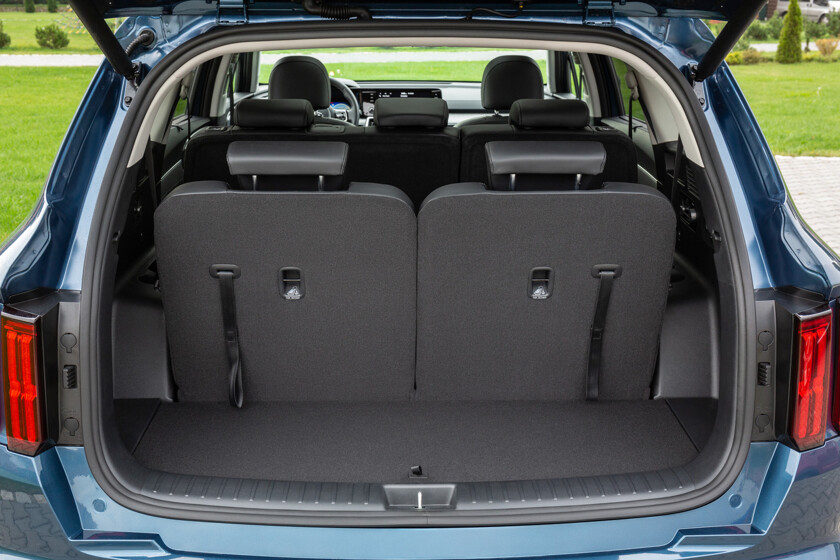 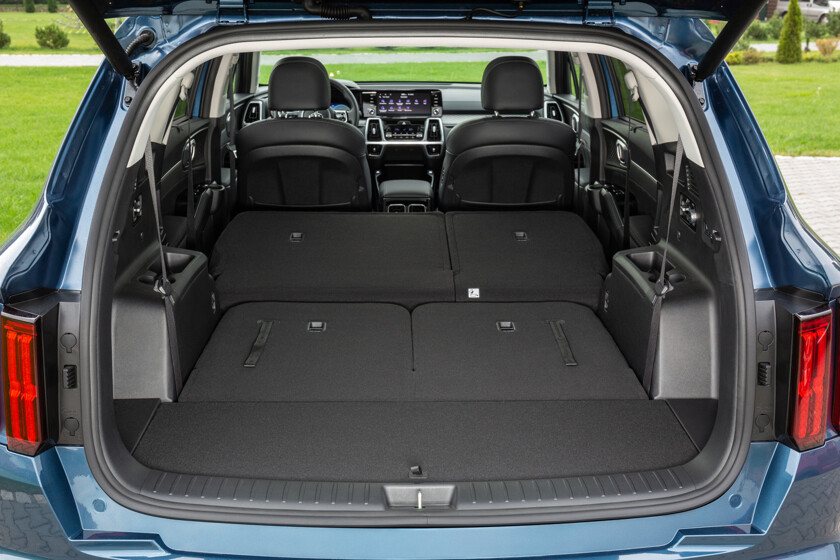 In the seven-seater version, the trunk volume is 187 liters, but with the second and third row seats folded, it increases to 2011 liters. For five-seater accommodation – from 616 to 821 liters (depending on the position of the sofa)

Inside, at the same time, the motors do not show themselves in any way, at first the Continental Premium Contact 6 tires solo, and after 120 km / h wind noise is added to them. Not to say that this leads to discomfort, but in such a pleasant interior you want silence. And you shouldn’t chase big wheels – the Sorento runs much smoother on 18-inch wheels than on “20s”. I will add that the suspension still does not like bumps with sharp edges, the Sorento is harsh on them. 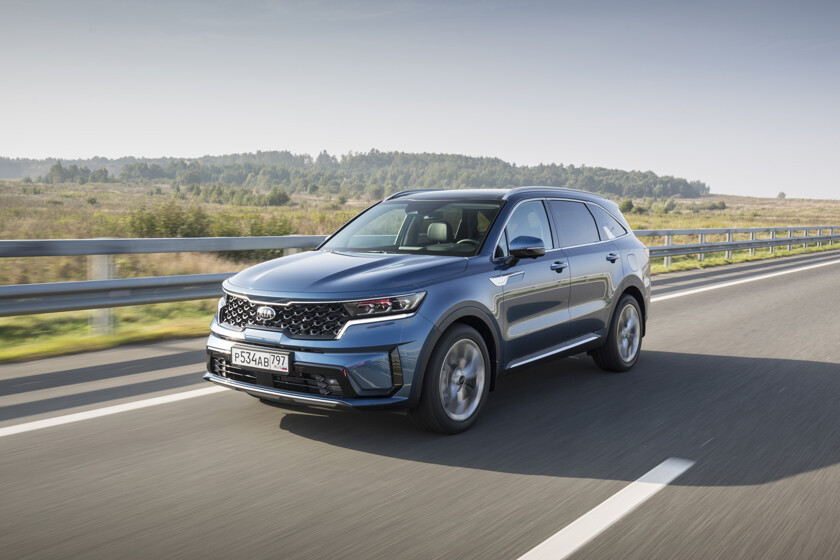 There is another nuance – the diesel is paired with an 8-speed robot with two clutches. Yes, during the test, I did not notice the slightest jerk in traffic jams or on light off-road conditions, in all modes the box works smoothly and adequately, but Kia continues to test Russian customers for loyalty – first they offered a variator for a compact crossover Seltos, now a robot for Sorento. Will this affect his popularity? 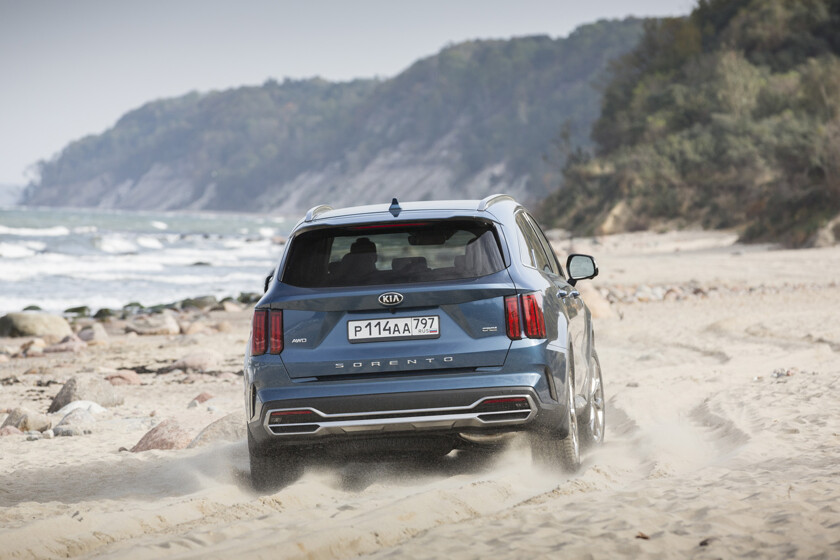 The body weight is reduced by 21 kg, it has become stiffer for twisting by 12.3%

The surcharge for a diesel engine in the same configuration as a petrol 2.5 is 150 thousand rubles – this is less than 6% of the cost of the car, so I definitely vote for the “rattler”. The diesel Sorento is both faster (9.2 seconds to a hundred) and more economical – on average, it consumed about 2.5 l / 100 km less fuel per route. Interestingly, the Premium + package received a different steering system – with an electric motor mounted on the steering rack (and not on the shaft, as in conventional Sorentos). Slightly sharper, a little denser, and again the question hovering in the air, why is this seven-seat crossover?

There are other new options too

The Sorento has also changed significantly inside – the interior has begun to look more solid, and in expensive trim levels, instead of the classic dashboard, a screen appeared, where the image from the side cameras is displayed. The multimedia complex has also been updated – in the top versions it has a 10-inch display, the ability to select driver profiles, Android Auto and Apple CarPlay connectivity. The cameras themselves have become much better. However, we have already seen the same thing in the sedan. Kia K5. 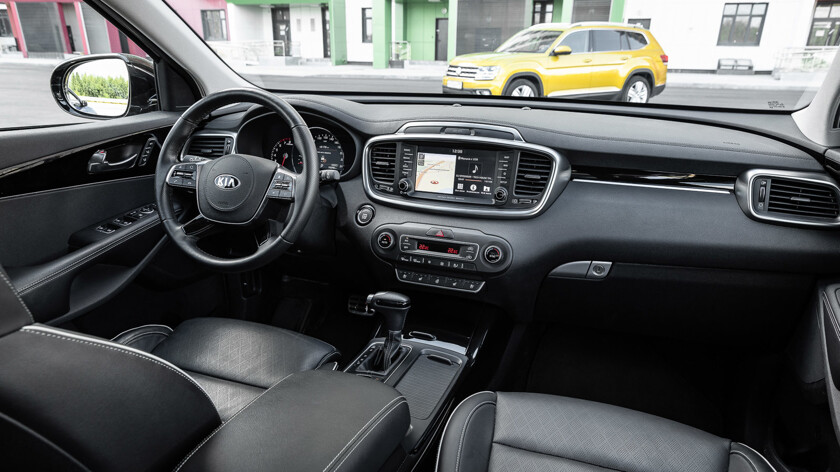 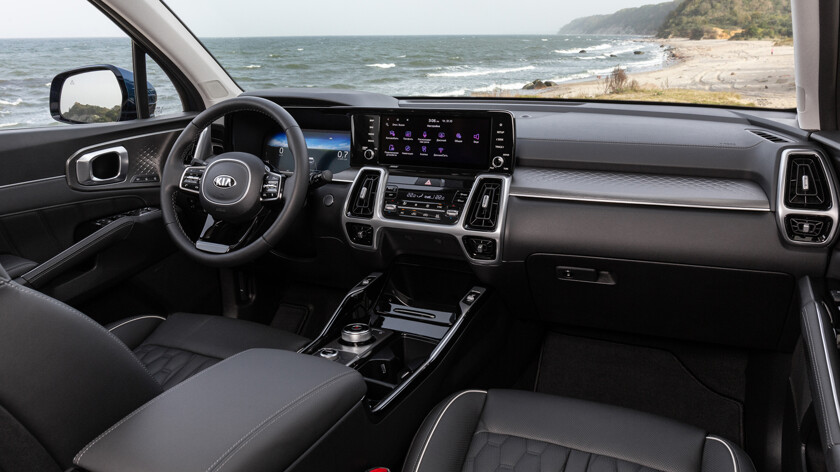 Kia has already taught us that their interiors are very comfortable. The Sorento is no exception, there are many compartments for small things, wireless charging is well located, and there are as many as 8 USB slots, including sockets in the backs of the front seats. In addition, the Sorento has good visibility and good seats (ventilation is also available). The main anachronism is the foot-operated parking brake in all trim levels, except for the top Premium and Premium +

The complex of active safety systems Drive Wise has been modernized – an intelligent speed limiter has been added, which reads signs and independently brakes the car to the desired limit (you can select +10 km / h in the menu), a collision avoidance system when turning at intersections with recognition of pedestrians and cyclists, and remote exit from a narrow parking space.

The new Sorento also has a remote engine start, while climate control and seat and steering wheel heating (if they were not turned off when leaving the car) will turn on. And the seats of the maximum configuration Premium + are upholstered in Nappa leather. Coziness is also added by the contour lighting, where, like the K5, a wide range of colors is available.

How much did Sorento rise in price?

As before, the Classic starter kit is the only one available with front-wheel drive. And then the rise in price was only 25 thousand – the new Sorento costs from 2 149 900 rubles. The difference is exactly the same between the Comfort versions. I see the optimal versions as diesel Sorento Luxe (2,589,900 rubles) or Sorento Prestige (2,799,000 rubles), which have all the necessary equipment and the wheels remain 18-inch.

And if for Luxe in comparison with the previous Sorento Prime the surcharge comes out only 35 thousand, then the new Sorento Prestige turned out to be 150 thousand more expensive. And the only equipment that falls out for 3 million is the Sorento Premium + for 3,149,900 rubles. However, Kia makes the main bet on average performances. 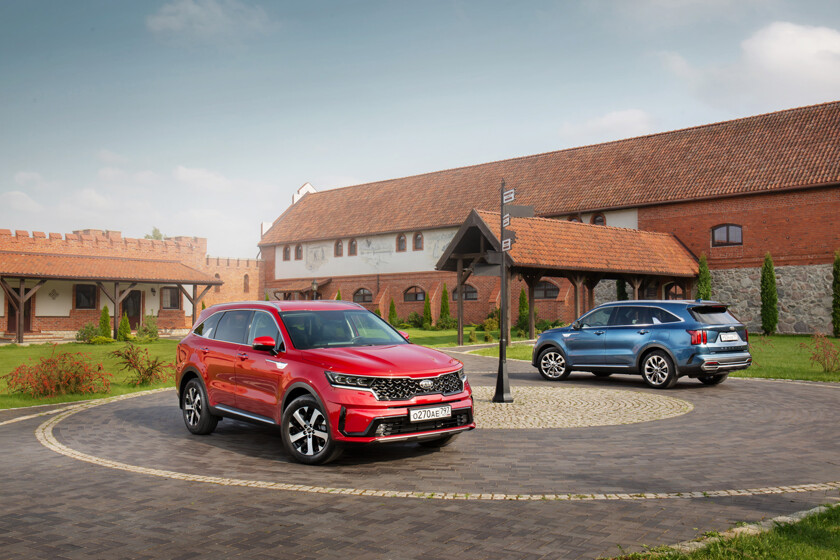 Sales of the new Kia Sorento will begin on October 15th. Choose from 10 colors, including the new Mineral Blue or Runway Red

By the way, now we will not sell old Sorentos in parallel with new ones – Kaliningrad Avtotor is leaving both Prime and second-generation cars that were produced there in a cycle with welding and painting of bodies. But Kia is confident that they will be able to maintain a good share in the D-SUV class. There is every reason for this – the Sorentо was previously a crossover without obvious flaws, and now it also has a bright appearance. It remains only to find out whether the public will accept the robotic box.