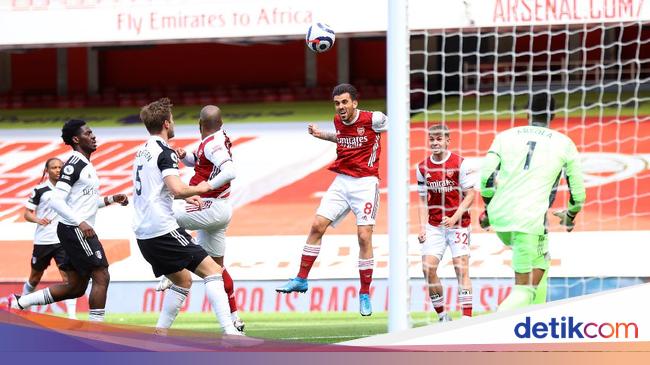 Arsenal failed to excel in the first half at entertaining Fulham in continued Premier League. Dani Ceballos’ goal was disallowed to keep the score 0-0.

Competing at the Emirates Stadium on Sunday (18/4/2021) evening WIB, Arsenal immediately stepped on the gas at the start of the match. An opportunity from close range in the first minute failed to be cleared by Gabriel Martinelli.

Martinelli again wasted opportunities in the sixth minute. His shot ball from a distance was too weak to be anticipated by Fulham goalkeeper Alphonse Areola.

The tempo of the game slowed down to enter the tenth minute. Fulham played more waiting in the area of ​​their own defense while looking for an Arsenal gap to make a wrong pass.

Fulham almost scored first in the 20th minute. Josh Maja’s shot ball which hit the Arsenal player’s leg outwitted goalkeeper Mat Ryan and rolled slightly on the right side of the goal.

Arsenal threatened back a minute later. Emile Smith Rowe fired a shot from outside the penalty box, but the ball was wide of the target.

Arsenal had managed to tear Fulham’s goal in the 40th minute with a header Dani ceballos, who took advantage of Hector Bellerin’s cross.

The goal was eventually disallowed after being reviewed via VAR. Bukayo Saka, who sent the pass to Bellerin, was declared offside from his toes.

There were no goals created during the first 45 minutes. The 0-0 score lasted until halftime.

Dani ceballos could become a player of the Arsenal permanently if Gunners pay £ 22 million to Real Madrid, according to reports coming out of Spain.

The Spanish midfielder has been on loan to the Emirates for the past two seasons and helped the Gunners to win the FA Cup last year.

His return to the Emirates has not been as good as his first stint at the club, but he is still a fan favorite but not Mikel Arteta’s.

Dani Ceballos has to regain his starting position with Arteta

The emerging midfield partnership of Thomas Partey and Granit Xhaka has seen him play just a handful of games this season, mostly as a rotation or replacement part.

But the Ghanaian has been injured again, and that could open up an opportunity for Dani Ceballos to play Leeds United.

If he finds the form and can earn a place in the first team in this second half of the season, he could tempt Arsenal to sign him permanently.

The reason says that Gunners they can pull it off for just £ 22 million, a figure that doesn’t seem high considering the age and quality of the player. A more than interesting signing.

Real Madrid are desperate for cash after seeing their income plummet due to the COVID-19 pandemic. The Spanish team hopes to capitalize on some of their fringe players, and that includes Ceballos.

But Arsenal can face competition from Real Betis according to the same report. The Verdiblanco team wants to sign the return of one of the most important young talents of its quarry in recent years. But the English team seems the best located to close the signing.

One of the most notorious movements of this winter transfer market has undoubtedly been the arrival of Martin Odegaard al Arsenal. The Norwegian midfielder, without minutes at Zinedine Zidane’s Real Madrid, looked for a way out and found it in the gunner box at the hands of Mikel Arteta.

But now, the question that many are asking is … will he have minutes at the Emirates Stadium? Because, when we stop to think, it is not so clear and we must take into account several factors.

While it is true that the position he occupies Dani ceballos on the pitch is not the same as the one that Martin Odegaard will occupy, in the end the eleven is one of the footballers that it is, and there is space for three midfielders in the scheme that Mikel Arteta most commonly uses, his 4-2- 3-1:

– Thomas Partey: Ghanaian is one of the fixed. His figure as a stopper, like that 5 in front of the defense that provides stability, muscle and travel is more than necessary for the team. One less site.

– Granit Xhaka: the creator who is playing the most in that double pivot. It is the one that has Dani Ceballos seated and in a place where he could already enter Odegaard, although it fits more in the midfielder. The Swiss has a great kicking the ball and an amazing facility for changes of orientation.

– Smith-Rowe: the young attacking midfielder acts ahead of the previous two, and with him the results are coming. Vertical player with a lot of quality.

So Odegaard will have to move one of these players from the starting eleven without counting on Dani Ceballos himself or others like Elneny, Azeez o Willock They also push from the bench to get opportunities and minutes in this sleeping giant of English football.

The Arsenal you are experiencing one of the most difficult moments in your recent history. The Gunners They are making the worst start in their history in the Premier League and their poor soccer performance is the main reason for these negative results.

Right now, Arsenal is in the fifteenth position in the Premier League with only 13 points in 11 games (four wins, one draw and six losses) with only 10 goals for and 14 against, being closer to the relegation places than to the qualification zone for European competitions. They have a four match win streak (four losses and one draw) and only one win in their last five games in the English first division. Worrisome numbers and that demonstrate the low collective and individual level of the team.

For that reason we are going to analyze and list the reasons why the Gunners They are going through a difficult time in the Premier League, despite coming from winning the FA Cup and the Community Shield a few months ago.

The reasons for the poor performance of Mikel Arteta’s Arsenal

– Badly made insole: Despite being one of the teams that signed the best in the last transfer market, Arsenal does not have a squad capable of better assimilating Mikel Arteta’s game plan. The Spanish coach does not have midfielders capable of playing between the lines to verticalize, nor does he have a left winger capable of making a difference on the wing (Tierney stands out more as a left central).

These doubts have generated that Arteta has to play with many pieces but without finding positive results.

-Little gunpowder in attack: Arsenal have one of the strongest defenses in the Premier League (taking into account that we are in the presence of a season with many goals) but in attack the story is different. The Gunners are the seventeenth team with the most goals of the season with just 10, just ahead of West Bromwich Albion, Sheffield United and Burnley, three candidates for relegation at the end of the season.

This is due to the poor performance of pieces such as Pierre Emerick Aubameyang (he has only scored two goals) and Alexander Lacazette (he has only scored three goals) but, at the same time, it is due to the little that the team generates in the offensive phase. Without pieces capable of receiving between lines to verticalize or unbalancing extremes at the expected level, Arsenal is a flat team with very few ideas in positional attack and with little punch to generate in transitions.

The profiles in midfield: Arsenal do not have midfielders who can make the difference between lines and, at the same time, Arteta constantly bets with three players who stand out is at the base of the play (Ceballos, Xhaka and Thomas) but who overlap within the court, which means that Arsenal generate very little in attack.

-Mikel Arteta does not find answers on the board: The Spanish coach is having a lot of trouble finding solutions on the board. Schema and player changes, different staging and positional exchanges to specific players have not paid off at the start of the season.

Mikel Arteta does not have a clear path out of the pit the team is in and, at this moment, he needs his main figures to take a leap in quality and facilitate the process of adapting to the new pieces. 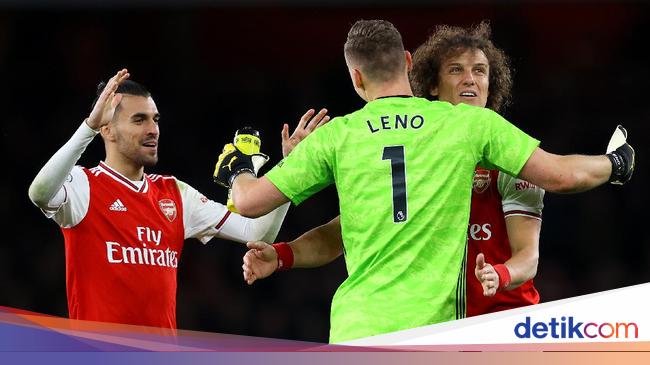 Two Players Arsenal reportedly beaten until he bled in the training session. Is David Luiz vs Dani Ceballos which is said to be a big fuss.

The report was disclosed The Athletic, who said Luiz got a late tackle from Ceballos. Luiz was reportedly angry during a training session last Friday (13/11).

The Brazilian player is called to punch Ceballos. The Spanish midfielder’s nose was bleeding from Luiz’s punch.

Ceballos reportedly wanted to return the hit. However, his teammates immediately intervened.

Manager Arsenal Mikel Arteta reportedly sent them home immediately. The team was then closed for three days, before the team rejoined on Tuesday (17/11). Both Luiz and Ceballos have reportedly apologized to all the players who were in training.

The report has been denied by Ceballos. On Twitter, he responded to the teasing about the news shared by journalists Athletic, David Ornstein.

According to talkSport, is not the first time Ceballos has had a case of commotion at Arsenal. The loan player from Real Madrid previously had an argument with Eddie Nketiah in September.

Luiz too. The 33-year-old defender had a fuss with Gonzalo Higuain at Chelsea, to be precise in the final match Europa League, when Chelsea won 4-1 over Arsenal in Bakui, Azerbaijan, last year.

Arsenal himself will travel to Elland Roads, to face Leeds United in the 9th week Premier League, Sunday (22/11/2020). Currently, The Gunners are still ranked 11th Premier League standings, while at level 15. 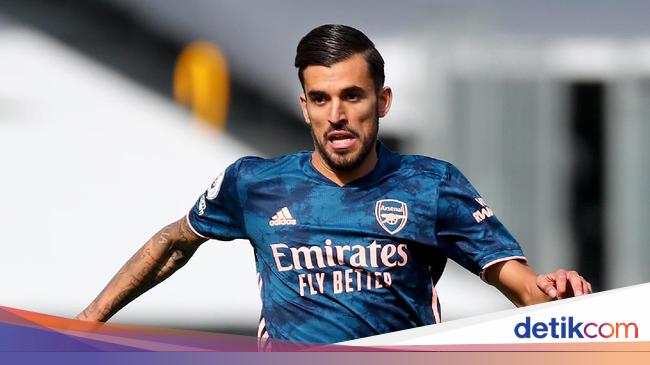 Arsenal successful win in the first week of the Premier League over Fulham 3-0. But before the match, the two players Dani Ceballos and Eddie Nketiah almost a scuffle!

Arsenal securing three points over Fulham at Craven Cottage on Saturday (12/09/2020) in the first week Premier League 2020/2021 season. Three Arsenal goals were scored by Alexandre Lacazette in the first half, and Gabriel Magalhaes and Pierre-Emerick Aubameyang in the second half.

Footage of the match can be watched via Mola TV. By the way, the following link klin this.

Behind Arsenal’s victory, there is a story that is a little bit shameless. Two Gunners retainers almost collided during the warm-up before the match

Both are Dani Ceballos and Eddie Nketiah. Both are young players, one is on loan from Real Madrid and the other is a dropout from the Arsenal academy.

This was also recorded on the camera. BT Sport released the video via Instgram.

You can see, Dani Ceballos and Eddie Nketiah are hot with each other. First, Ceballos tries to grab the ball hard, which Nketiah replies.

Then, Nketiah kicked the ball hard at Ceballos. The shoving happened, until the players Arsenal others dissolve it and distance them both.

Somehow the two of them were making a fuss like that. But after the match was over, Ceballos immediately posted a photo with Nketiah with the words ‘no problems here my brother’.

They both also played as substitutes in the match against Fulham. The two of them also didn’t make a fuss in the field anymore.

When the competition was just starting, it was already noisy …