On the occasion of Maria’s 35th anniversary, Nintendo decided to re-release three classic games that have been tested for years, from the brave plumber’s main series, this time for the first time on the latest Switch console. It was similar ten years ago with the Wii console, but the collection at that time lacked a substantial 3D designation in its name.

Current collection Super Mario 3D All-Stars he does not focus on Mario’s first 2D adventure from the 80’s, but on his first three trips to the third dimension. Namely, the titles Super Mario 64 from 1997 (Nintendo 64), Super Mario Sunshine from 2002 (GameCube) and Super Mario Galaxy from 2007 (Wii).

Personally, I jumped on the unique wave called Nintendo too late, only with the arrival of the Switch, and before that I only met the classic platformers and the first part of the Galaxy on the Wii. For me, two-thirds of the collection was a discovery of something that so many players discovered long ago, but since many other players got to create Nintendo just like me with the year 2017, the following text will be intended for them as well.

I can just point out that Super Mario 3D All-Stars is a collection of three amazing games that will delight both rock-solid fans and brand new players. At the same time, it should be noted that Nintendo has done the laziest possible work here. By no means are these remasters or remakes of the original games, but only their ports.

This means that they are adapted in terms of control to the capabilities of the Switch (not every game is mastered) and in terms of graphics they have received a higher resolution so that you do not have so much eye on them on today’s TVs. And that’s about all Nintendo’s care. A missed opportunity? For the first two games for sure.

On the very first 3D Mario, the tooth of time logically signed the most. Because there was no touch on graphics, you really have a trip of 23 years into the past. But while the visual side of the time must be taken into account for the port, the controls and some mechanisms no longer stand today.

Super Mario 64 helped define the control of the character and the camera in 3D space at the time, but today we are much further and the first acquaintance with this game after so many years can be unnecessarily frustrating. Mario has exaggerated inertia and slippery legs, which makes it difficult to maneuver on narrow footbridges and try to start a conversation with iconic characters (the illegibility of the boundaries of Mario’s collision with objects doesn’t help, so you’ll roar into the abyss sooner than you might expect).


source: Own photo of the author

Nevertheless, I have to recommend this trip to the past to today’s player. You will realize how complex and clever the game was for its time and you will find that a lot of Mario’s special acrobatic stunts lasted until Super Mario Odyssey. It is no longer so obvious to today’s eye, but the breakthrough and innovation of the Super Mario 64 at the time cannot be doubted.

For nostalgics, this is the best way to revisit the legendary game, which simply never looked better and whose ubiquitous text tables have never been more readable. However, new players have to overcome the groundbreaking controls, the inflexible camera and accept that Nintendo has maintained a 4: 3 ratio in this case instead of today’s 16: 9 standard.

When they manage it, another great adventure full of interesting ideas awaits them. But over time, it would also take a remake in style Crash a Spyra, don’t you think?

Super Mario Sunshine is (another) indisputable proof of an endless well of ideas and courage to do dog pieces with one brand. It starts with the story and straight to its first cutscene. Mario and his party are looking to relax on the island of Delfino, but right after landing Mario is taken into custody! This is due to his double, who covered the whole island with graffiti and escaped unharmed. Mario is serving a sentence on his vacation by cleaning up a brothel…

And the removal of sticky paint itself is a very innovative mechanism. Mario has a constantly attached water pump on his back, which he can use as a jetpack or hose. Water needs to be replenished and with its help you clean the island and fight enemies. 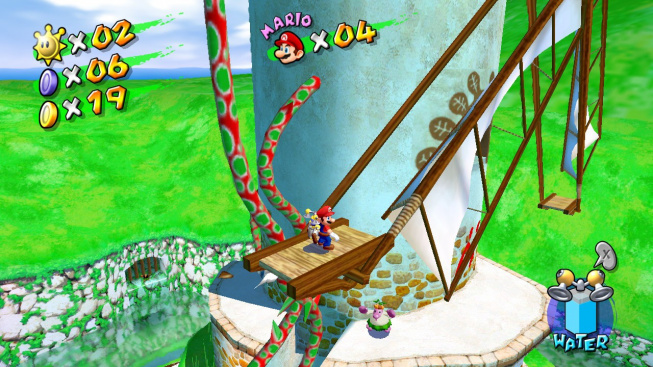 source: Own photo of the author

Super Mario Sunshine is much more modern than 64 and is not difficult to penetrate at all. You won’t be annoyed by the camera or the controls, we’re at the right aspect ratio, and while we’re only at 720p in the handheld, we’re already watching 1080p in the TV dock.

Personally, I was fascinated by the physics of water, which is at a much better level than the following parts of the series. In some places, the famous perfect design of levels peeks out here, but unfortunately in other places there are also worse design decisions, in which a single mistake leads to the repetition of a demanding journey and nothing can prevent frustration.

But even if only for its innovative approaches, Sunshine is worth a try and again, revisiting this game has never been so pleasing to the eye (although it could be even nicer if it was a real remaster with at least modernized textures). The timelessness of Nintendo’s ideas is evidenced by the fact that the idea of ​​Super Mario Sunshine is actually based today Splatoon…

Super Mario Galaxy is one of the best that has ever come out of Nintendo, and the opportunity to play it again on Switch is simply not denied. There is nothing to complain about as such, because in terms of design we are in the field of perfection, but when it comes to port control, the authors did not choose the best compromises. 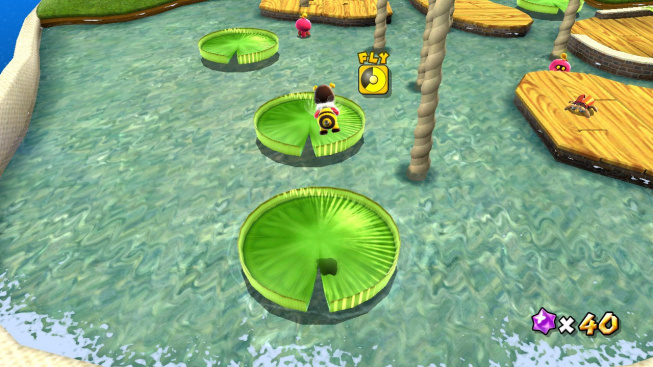 source: Own photo of the author

As long as you play in the TV dock, you will be bothered by practically only a very frequent need to return the cursor of the right Joy-Con to the middle of the screen by pressing the R button. But once you decide to play in the handheld, you will be deprived of part of the experience.

The world of Super Mario Galaxy is full of fragments of stars that are worth collecting for various reasons. And while in the dock you can do this by simply moving the cursor around the screen (the cursor in your hand is represented by a gyroscope in Joy-Con), which does not interrupt other controls (Maria movement, attacks, jumping), in the handheld you must use your finger on the touch screen and give up so for a while all the control on one of the controllers.

It’s inconvenient, and even the menus in the menu you have to confirm with your finger. Nintendo’s laziness can be really seen here, when he didn’t even get the job of navigating the menus with the help of the classic buttons A and B together with the lever. But it’s not that the Galaxy is unplayable in the handheld. Due to its origin, it is only intended for a completely different control, which the Switch imitates almost as well in dock mode.

A word in conclusion

Super Mario 3D All-Stars is a collection of three famous games that should simply not be missing in the Switch owner’s bookcase. And yet it could be said that it is sloppy. Nintendo could and should have ventured to make bigger hits on older titles, but in the end we can be happy that it allowed us to visit the tried and tested pieces at least in better resolution.

Each of the three games is innovative and engaging in its own way. With the exception of Super Mario 64, these are games that new players will fully enjoy, and in all cases it is a nice service to the most loyal fans. In addition, the collection contains complete soundtracks of all three games, so a nostalgic tear is really taken care of.

But as usual, there is at least one special decision for every great decision that is made in Nintendo. Will we release three great games again? Great! But only as ports? Alright then. And we’ll just make it a trilogy, because Super Mario Galaxy 2 we’ll keep an incident for Uncle. Yeah and you know what? Why should we sell it forever and ever? We will reduce the boxes in pieces and end digital distribution on March 31, 2021.

What to add? Just Nintendo…

Bagar in captivity of terror! Worried about her five-month-old daughter