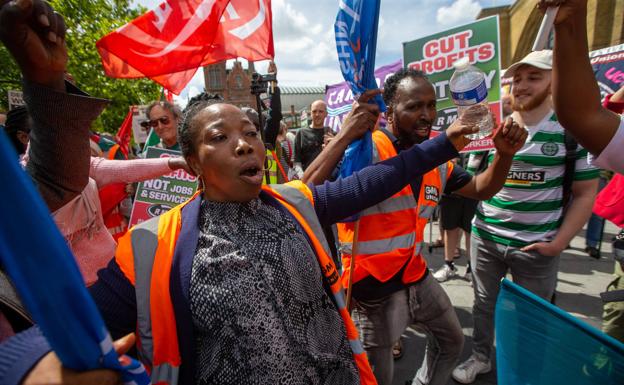 The strike of the staff of the railway sector in the United Kingdom, which paralyzed almost all rail transport beyond the three days of strike called this week, is the preamble to an announced “summer of discontent”. So is a likely sour autumn, with labor disputes in the public sector and at crucial private companies, from criminal lawyers to British Airways and postal service employees.

Boris Johnson’s government faces the double challenge of soaring inflation and the labor shortage that is growing as a result of the coronavirus pandemic and immigration legislation after ‘Brexit’. In the pulse between the two contradictory forces, the prime minister defends salary increases of 3%, although he understands, as he said this Saturday, “people’s frustration” at the high cost of living. “People curse every time they fill up their cars,” the ‘premier’ told Sky television from Kigali, the capital of Rwanda and the venue for the summit of Commonwealth heads of government.

The inflation rate topped 9% in May and will hover around 11% by the end of the year, according to the Bank of England’s latest projection. On the other hand, the labor market has fallen into an unprecedented hole, with 1.3 million vacancies in the three months to May 2022, half a million more than those registered in the same period of the previous year. Therefore, a conflict has been unleashed between the need to contain inflationary forces and the option of improving working conditions to retain employees and attract new professionals.

The first assault is played in the transportation industry. The main union in the rail sector, RMT, paralyzed 80% of services with three strike days – Monday, Thursday and Saturday – although the impact of the union action was felt all week.

It claims for its 40,000 affiliates with jobs in the private railway companies and the public entity that manages the railways an increase in salary of around 7%, better working conditions and guarantees that there will be no forced dismissals as a result of the programs of modernization required by the Executive. “There is still a long way to go in this dispute,” according to its secretary general, Mick Lynch, on Saturday.

It is not the only union that is preparing for a prolonged duel. London Underground employees halted service on Tuesday and voted to prolong union action over their pensions and against forced redundancies. In turn, ground staff of the British Airways airline at Heathrow approved going on strike on dates still unannounced in July or August. The strike could spread to engineers with jobs at Gatwick and other airports.