SteelSeries has shown the Aerox 3, a gaming mouse that can be seen as a lighter version of the Rival 3. The Aerox has, among other things, two hundred holes in the housing and a smaller pcb, making the wired mouse weighs 15 grams less than the 57 grams. Rival 3.

The SteelSeries Aerox 3 is supplied as both a wired and wireless variant, writes the manufacturer. The wireless mouse gets an optical sensor from PixArt with a sensitivity of 18,000 counts per inch in 400 inches per second. This sensor is also included in the Rival 3. The sensor in the wired Aerox 3 has a sensitivity of 8500cpi and 300ips. The mice are also IP54 rated, which means they should be able to withstand water, dust and oil.

Both mice have two hundred holes in the top and bottom of the case. SteelSeries proposes this to have paid attention to the solidity of the mouse. For example, certain parts of the housing have been made thicker. The mouse housing should have the sturdiness of the Rival 3, with “about 18 grams” less weight. The scroll wheel has also been made lighter and the pcb is 50 percent thinner. That pcb is coated with a ‘water and dust repellent spray’ to protect it. The mouse is also said to be designed to prevent damage from static electricity.

Just like the Rival 3 Wireless, the Aerox 3 Wireless can be connected via a 2.4 GHz USB stick or with bluetooth. With the Aerox wireless mouse with built-in battery, SteelSeries promises a battery life of two hundred hours when using the Bluetooth connection, or more than eighty hours with the 2.4 GHz connection. Charging is possible with the wireless version via USB-C. This should allow a battery life of at least 40 hours with 15 minutes of charging. SteelSeries does not specify at which connection this battery life is.

Both mice have RGB lighting and Teflon feet. The switches are mechanical and could last for sixty million clicks. At the top is also a button to set the cpi, on the left are two buttons next to it. The wired Aerox 3 weighs 57 grams, the Aerox 3 Wireless weighs 66 grams. Both mice will be available for purchase worldwide from November 10. The Aerox 3 has a suggested retail price of 70 euros, the Aerox 3 Wireless costs 110 euros. 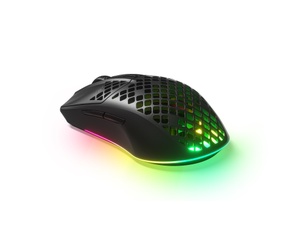 VZGLYAD / Russia has found a new way to get rich :: Economy

Two identical SIMs in the network at the...

There’s a Sighting of Oppo Reno6 at PUBG...